The excellent Jacques Roubaud, talking, in Poetry, etcetera: Cleaning House (Green Integer, 2006), about the incroyable longevity of Oulipo (found’d in 1960 by François Le Lionnais and Raymond Queneau, and rollicking still today, nearly a half-century later), may he not offer a leçon for all budding inchoate formers of groupuscules, and them who’ve sunk they incisors into such a formation (only to find how delimiting market savvy finally is)? A few words (translated by Guy Bennett):

Since the Renaissance if not before, the history of literature in our country is characterized by a very particular modus operandi. In a recurrent way, generation after generation, literary groups appear (or are invented after the fact by literary historians). They always share the following characteristics (that I shall describe briefly and basically):

a—These groups form in order to renew and recast French literature, which has fallen into a deplorable, degenerative state (according to them).
b—Their watchword is: everything that was done before us is worthless. Everything that will be done after us will owe us its existence. (That which was done in the past can only prefigure what the group is going to do. What the group proposes defines what will be good in the future.)
c—The structure of these groups is very hierarchized: there is one or many leaders, epigones, minor figures.
d—The group deeply despises all of its contemporaries, especially rival groups that its very existence and literary program inevitably generate.
e—The very mode of existence of the group brings about its rather rapid destruction, through divisions, divergences, “deviations,” and exclusions.
f—During its generally short life, the group, surrounded by enemies and attacked on all sides, develops traits typical of sects, mafias, gangs, or more modestly, mutual admiration societies.

Roubaud proceeds to identify some groups (in the French context), la Pléiade, the Classics, the Romantics, the Surrealists, and—excellent barb—“though forgotten today, the Tel Quel group.” Next, after a paragraph regarding Oulipo’s tie with the Surrealists (through Raymond Queneau—“he left the Bretonian group in a huff”), Roubaud spells out the “few, original rules” that Queneau, mostly, “‘invented’”:

a—The Oulipo group is not a closed group. It grows by co-opting new members.
b—No one can be excluded from Ouilipo.
c—On the other hand (you don’t get without giving) no one can quit Oulipo, nor cease being a part of it.
d—it follows that whoever was ever a member of Oulipo is always a member. In particular, that implies:
d′—The dead are still members of Oulipo. (Thus Luc Étienne, co-author of “la Méthode à Mimile,” inventor of the phonetic palindrome; Latis, punctilious pataphysician; Albert-Marie Schmidt, specialist of 16th-century literature; Marcel Duchamp, painter, inventor of RRose SSélavye . . .)
e—There is an exception to the excessively restrictive aspect of the last rule. Membership in Oulipo can be terminated by committing suicide in the presence of a bailiff, who can certify that the suicide of the Oulipian in question is, according to his explicit last wishes, intended to get him out of Oulipo, that he might enjoy full freedom of movement for the rest of eternity.

Roubaud, too, points to the Bourbaki group (“an avant-garde group of mathematicians”) for a model for Oulipo (“Oulipo is an homage to and imitation of Bourbaki . . . It is also a parody if not a profanation of Bourbaki . . .”) He cites the Octavio Paz axiom that homage and profanation are the two breasts of literature. Roubaud’s explanation of Bourbaki: “Bourbaki’s founding Project—rewrite all of Mathematics, giving it a solid base derived from a single source, the Set Theory, and from a rigorous method, the Axiomatic Method—is serious, admirable, imperialist, sectarian, megalomaniacal and pompous. (Humor is not its primary trait.)” (I find Roubaud’s tone there a little mystifying.) And, continuing:

The Oulipian project, which “translated” the Bourbakistic aim and method into the realm of the language arts is likewise serious and ambitious; it is not sectarian, however, and is not persuaded of the validity of its processes to the exclusion of all other approaches.

What I find salutary in Oulipo: that refusal of exclusion. That stubborn polymathic openness. Here’s a piece of a report call’d “Twenty-Five Years with Nicolas Bourbaki (1949-1973)” by Armand Borel:

Later I was invited to attend (part of) a Bourbaki Congress and was totally bewildered. Those meetings (as a rule three per year: two of one week, one of about two) were private affairs, devoted to the books [the original impetus for the group’s formation: to rewrite the standard (and wanting) differential and integral calculus text, Edouard Goursat’s Traité d’Analyse]. A usual session would discuss a draft of some chapter or maybe a preliminary report on a topic under consideration for inclusion, then or later. It was read aloud line by line by a member, and anyone could at any time interrupt, comment, ask questions, or criticize. More often than not, this “discussion” turned into a chaotic shouting match. I had often noticed that [Jean] Dieudonné [a founder of what’s officially known as the Association des collaborateurs de Nicolas Bourbaki, (Bourbaki himself being a pseudonymous “nobody” rather like the Luther Blissett of Q) along with Henri Cartan, Claude Chevalley, Jean Delsarte, and André Weil] with his stentorian voice, his propensity for definitive statements, and extreme opinions, would automatically raise the decibel level of any conversation he would take part in. Still, I was not prepared for what I saw and heard: “Two or three monologues shouted at top voice, seemingly independently of one another” is how I briefly summarized for myself my impressions that first evening.

What Borel notes both how “everyone was expected to take part in everything” and “all decisions had to be unanimous,” and how such a cumbersome process stemmed, it seem’d, directly out of a belief that new ideas occur out of strife and confrontation.

Why am I telling you about Bourbaki? Apply to the poesy norteamericano at will. A note here reads (torn scrap of paper): “thing to do is / To plow the matted roots.” Another: “The cook Escoffier’s Faites simples (‘Keep it simple’) versus the Faites quelque chose d’autre.” Another: “lodged in it like / innocuous heaven- / Breach’d geometries.” Another:

Say something along the lines of:

I remember one snowy winter’s night
The traffic on rue de Liège jammed in tight. 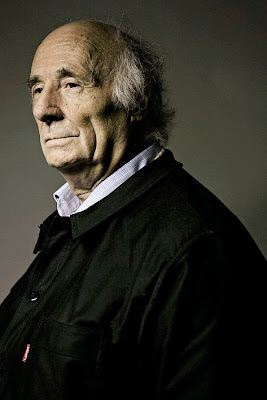