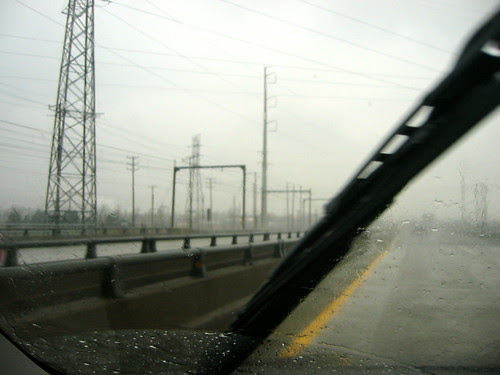 Odd, that I finish’d reading C. S. Giscombe’s Prairie Style (Dalkey Archive, 2008) and turn’d to the bookshelf to pull down a copy of Postcards, Giscombe’s first, only to open it to a piece beginning with some lines of Wallace Stevens: “Children picking up our bones / Will never know that these were once / As quick as foxes on a hill.” Odd because one sequence—the central, titled “Inland”—in Prairie Style is full “fit” with foxes (“this far inland the appearance of a fox is more reference than metaphor”) and odd because I kept seeing, reading, Stevensesqueries (like, “let image be the writhing end of hoop-la”) dropped here and there into the poems. Not only Stevensesqueries; too, a way of proceeding declaratively (“argument,” one early piece begins “You can always say what you are”) that is, I think, rather Stevensesque. Though with a vengeance: for Giscombe is entirely capable of shuffling the terms, reassigning the scores, mocking the tune, all in a disturbing sleight-of-hand way that leaves one pop-eyed and shiftless and itchy, wondering if the train’s pull’d out or the stationmaster’s slipped one a mickey, and what about the music? Look how “Cry Me a River” slips away (like a fox):

Generally, value exists in relation to opportunities for exchange—seeing something in terms of something else—but for the sake of argument say that the shape of a region or of some distinct area of a city could stand in for memory and that it—the shape—is a specific value because it’s apparent and public, and that way achieves an almost nameless contour.

There’s something there akin to bringing cupped hand full of water to one’s lips and finding it all leak’d away, the exchange occurring so quickly, shape (“apparent and public”) traded for memory, and so achieving contour (“almost nameless”). The words fling off any tangible thing-attachment so successfully one’s left with a memory specific only in its (visceral, finally, or verging toward sexual) “shapeliness.” Meaning, an empty pit in the stomach, or loin-emptiness, a post-coital non-geography.

Isn’t there a nigh-unending concern in Prairie Style with “how to say it”? (One wonderful piece is titled “Notes on Region” and its title-page simply reproduces a clipping out of a dictionary, corn to cornfield by way of Corn Belt and corn bread and cornet—that latter illustrated by a young Miles Davis-looking man with a horn—as if that, a lean battery of “mere” definitions cut low to the page, ’d do, too. I should note: Giscombe’s pieces here are all prose poems, mostly short, and the book, design’d by Jeff Clark, allows each to hunker down on the page, as if built wide-rangingly close to the ground in the eponymous Frank Lloyd Wright style.) What to make, though, of a poem call’d “Argument” that begins “‘A thing that becomes terrifying to its maker’; more mayhem, poor mayhem” and ends “argument is a bus between destinations, you can see it coming”—a thing follow’d immediately by a piece call’d “Juxtaposition”:

Which is, itself, a kind of argument for the possibility of advancing meaning solely by means of relation and an “undoing” of that argument (“something else comes up”). It, itself, is then toss’d off; the next poem opens with “Juxtaposition is a kind of melodrama.” (And, later, recuperated: “I’ve been inclined to want juxtaposition to do its job. The devil’s in the details.”) It all provides for a vertiginous (exhilarating, echo-y) reading experience.

Other echoes (literary): A. R. Ammons (in some Ammonsesque lines—“Closure re-gathers the shape of the original undoing” or “Proximities change on you sooner or later . . . The idea was that the wind could carry your voice”; too, in a dedicatory piece—bluntly, “(for Ammons),” one reads a diffidence, a grudging in the terseness—that talks about “The big eye, ‘the compound eye of an insect”—Ommateum-talk); Nathaniel Mackey (the sound-stroked riffing, the rhythmic imperative, hard to put to a specific, maybe here one sees (hears) it—“Trim paragraphs of uninflected speech hung over the prairie, sound’s origin. Eros came up out of its den in the embankment—came out tawny, came out swarthy, came out more ‘dusky’ than ‘sienna.’ The sky was a glass of water. White men say cock and black men say dick. One gets even in the midwest, one gets even in the midwest, one gets even in the midwest. Eros was a common barnyard pest, now coming to be seen in suburban settings as well, a song with lyrics, clarified and ‘refined’ both . . .” Distill’d into that signifyin’ fox, “Eros” and “pest” and “song”—“Mistah Fox” elsewhere—is a hugely rich—complicated—history of racial and sexual and geographical attitudes; what’s astonishing is how deftly Giscombe sounds—utters and penetrates—that history.)

And Charles Olson, isn’t he somewhere in the particulars, the “reach” of Prairie Style? Giscombe’s prairie space is seemingly more animated (set upon) by the impurities (leavings, terrors?) of love and desire than the Gloucester-man’s—odd to think how Olson ends The Maximus Poems with a reference to “color”—“my wife my car my color and myself”—those discrete units. There is, in Giscombe, I’d wager, a more equivocating sense of “unit,” a shifting measure against which the stays of place get pinned. See how even the blunt particularity of an address gets suck’d off into a “range” of effects, a slurry of meanings that “stand in”:

To me, intention’s a fact, a register equal to any other value. Intention’s the device in nature. It repeats the range. I like that it’s noisy or can be; I like that it’s a measure. The median is full of images. Argument’s there to discern, to straighten you out. To me, meaning’s like parallel streets. Meaning stands in. Nothing more sexual than laziness. I’d be equivocal, I’d pass.

There’s a kind of ferocious need in Giscombe’s work to annotate, to record the details, that struggles against meaning’s lazy splay ravaging of the discernible. I love how—since Here (1994), Giscombe’s books’ve carried notes detailing the precise addresses where composition occurred. That, and the counter-precision of “Portions of this book were written on Amtrak.” Sink and countersink, bevel the edges of whatever’s hole’s to receive it, flush with the surface—what Giscombe’s achieving here is remarkably rife (rich) and pleasurable. As he puts it: “One advantage eclipses the other one.” And it bears repeating (end of “Lazy Man’s Load”):

I’m day-labor and the job’s regular hell, the stretch between the mowing devil and the horizon or between being God and being like some animal in the near distance. The bigger the region is, the more important the meaning.

Achieve and avoid, both.

One advantage eclipses the other one. 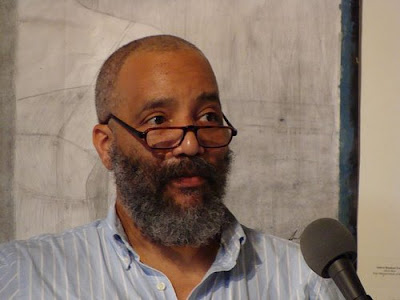