Ezra Pound, in the “Praefatio Ad Lectorem Electum,” the preface to The Spirit of Romance (1910): “My criticism has consisted in selection rather than in presentation of opinion.” And I am busy recalling something I wrote “for” James McConkey, pure quotation unadulterated by the vicissitudinous “input” of a sophomoric (literally) mind not at ease with itself, something like “all the lines I liked in Werther” (or maybe Augustine’s Confessions, I get the two mixed up, they end so similarly, each in that stylized turning away of life’s roseate unstomachableness . . .) I’d “got” the idea off of, I think, William Matthews, who’d review’d a book by Paul Metcalf (probably Apalache (1976), in just that manner, probably in the pages of Lillabulero, the magazine he and Russell Banks “did,” begun at Chapel Hill. And McConkey, the dear man, didn’t fuss or bludgeon, took my laziness in stride, suggest’d that (the forgotten American novelist) Herbert Gold’d done the same thing, made it all an acceptably “viable” way to proceed.

In 1920 Hans Reiter was born. He seemed less like a child than like a strand of seaweed. Canetti, and Borges, too, I think—two very different men—said that just as the sea was the symbol or mirror of the English, the forest was the metaphor the Germans inhabited. Hans Reiter defied this rule from the moment he was born. He didn’t like the earth, much less forests. He didn’t like the sea either, or what ordinary mortals call the sea, which is really only the surface of the sea, waves kicked up by the wind that have gradually become the metaphor for defeat and madness. What he liked was the seabed, that other earth, with its plains that weren’t plains and valleys that weren’t valleys and cliffs that weren’t cliffs.

And Ezra Pound, again in the “Praefatio Ad Lectorem Electum”:

Art is a fluid moving above or over the minds of men.
. . .
Art or an art is not unlike a river, in that it is perturbed at times by the quality of the river bed, but is in a way independent of that bed. The color of the water depends upon the substance of the bed and banks immediate and preceding. Stationary objects are reflected, but the quality of motion is of the river.

And the recurrent image of the “great celestial sea” in Gaddis’s The Recognitions—that man climbing down the rope to free the anchor hook’d on a tombstone. “Some people coming out of a church were surprised to see an anchor dangling by a rope from the sky, which caught in the tombstones, presently a man was seen descending with the object of detaching it, but as he reached the earth he died as we should if drowned in water . . .” as one of Gaddis’s sources puts it.

Or Pound (“Praefatio”): “Good art never bores one . . . it is the business of the arts to prevent ennui; in the literary art, to relieve, refresh, revive the mind of the reader—at reasonable intervals with some form of ecstasy, by some splendor of thought, some presentation of sheer beauty, some lightning turn of phrase—laughter is no mean ecstasy. Good art begins with an escape from dullness.” (I cannot help myself. I think of Ron Silliman’s recent re-hooplah-ing of Barrett Watten’s “test of poetry” claim (advocating for Silliman’s Tjanting) that “A bus ride is better than most art. . . . To enter the work might be possible anywhere, as one gets on or off a bus. It is possible in fact to read this book on a bus.” A false dichotomy. One is not, in fact, riding a bus whilst reading Silliman’s opus interminablilis, one is reading about riding a bus, a far duller thing.)

Chance or the devil had it that the book Hans Reiter chose to read was Wolfram von Eschenbach’s Parzival. . . .
Wolfram, Hans discovered, said of himself: I fled the pursuit of letters. Wolfram, Hans discovered, broke with the archetype of the courtly knight and was denied (or denied himself) all training, all clerical schooling. Wolfram, Hans discovered, unlike the troubadours and the minnesingers, declined to serve a lady. Wolfram, Hans discovered, declared that he was untutored in the arts, not to boast of a lack of education, but as a way of saying he was free from the burden of Latin learning and that he was a lay and independent knight. Lay and independent.
. . . Wolfram’s pride (I fled the pursuit of letters, I was untutored in the arts), a pride that stands aloof, a pride that says die, all of you, but I’ll live, confers on him a halo of dizzying mystery, of terrible indifference, which attracted the young Hans the way a giant magnet attracts a slender nail.

When the Aztecs came out of the pyramids, the sunlight didn’t hurt them. The behaved as if there were an eclipse of the sun. And they returned to their daily rounds, which basically consisted of strolling and bathing and then strolling again and spending a long time standing still in contemplation of imperceptible things or studying the patterns insects made in the dirt and eating with friends, but always in silence, which is the same as eating alone, and every so often they made war. And above them in the sky there was always an eclipse . . .

Ivanov had been a party member since 1902. Back then he had tried to write stories in the manner of Tolstoy, Chekhov, Gorky, or rather he had tied to plagiarize them without much success, which led him, after long reflection (a whole summer night), to the astute decision that he should write in the manner of Odoevsky and Lazhechnikov. Fifty percent Odoevsky and fifty percent Lazhechnikov. This went over well, in part because readers, their memories mostly faulty, had forgotten poor Odoevsky (1803-1869) and poor Lazhechnikov (1792-1869), who died the same year, and in part because literary criticism, as keen as ever, neither extrapolated nor made the connection nor noticed a thing.

Or the way Bolaño uses Ivanov (a character at innumerable levels of “remove” from “the main story”—Efraim Ivanov (a Soviet social-realist turned science-fiction writer—model’d, apparently, on a Soviet sci-fi writer named Ivan Efremov)’s life is being report’d by one Abraham Ansky, who fled the village of Kostekino, leaving behind a sheaf of notes, a sheaf being read by Hans Reiter, a German soldier (and boy-seaweed) who may or may not grow up to be the mysterious Benno von Archimboldi) Bolaño—in that deep pit—uses Ivanov to talk about writing. Here’s Ivanov sensing “something missing” in himself and those others on “the official lists of Soviet creators”: missing: the “moment at which the larva, with a reckless smile, turns into a butterfly”:

And then he began to think about how repulsive adolescent artists or pseudoartists were when viewed from up close. He thought about Mayakovsky, whom he knew personally, with whom he’d spoken once, perhaps, twice, and his enormous vanity, a vanity that likely hid his lack of love for his fellow man, his lack of interest in his fellow man, his outsize craving for fame. And then he thought about Lermontov, and Pushkin, as puffed up as movie stars or opera singers. Nijinsky, Gurov. Nadson. Blok (whom he’d met and who was unbearable). Remoras on the flanks of art, he thought. They think they’re suns, setting everything ablaze, but they aren’t suns, they’re just plunging meteors and in the end no one pays them any heed. They spread humiliation, not conflagration. And ultimately it’s always they who are humiliated, truly humiliated, bludgeoned and spat upon, execrated and maimed, thoroughly humiliated, taught a lesson, humiliated utterly.

For Ivanov, a real writer . . . was basically a responsible person with a certain level of maturity. A real writer had to know when to listen and when to act. . . . A real writer had to be someone relatively cool-headed, a man with common sense. Someone who didn’t talk too loud or start polemics. He had to be reasonably pleasant and he had to know how not to make gratuitous enemies. Above all keep his voice down, unless everyone else was raising his. . . .
. . .
Ivanov’s fear was of a literary nature. That is, it was the fear that afflicts most citizens who, one fine (or dark) day, choose to make the practice of writing, and especially the practice of fiction writing, an integral part of their lives. Fear of being no good. Also fear of being overlooked. But above all, fear of being no good. Fear that one’s efforts and striving will come to nothing. Fear of the step that leaves no trace. Fear of the forces of chance and nature that wipe away shallow prints. Fear of dining alone and unnoticed. Fear of going unrecognized. Fear of failure and making a spectacle of oneself. But above all, fear of being no good. Fear of forever dwelling in the hell of bad writers. Irrational fears . . . especially when the fearful soothed their fears with semblances. As if the worth (or excellence) of a work were based on semblances. Semblances that varied, of course, from on era and country to another, but that always remained just that, semblances, things that only seem and never are, things all surface and no depth, pure gesture, and even the gesture muddled by an effort of will, the hair and eyes and lips of Tolstoy and the versts traveled on horseback by Tolstoy and the women deflowered by Tolstoy in a tapestry burned by the fire of seeming.

Against “semblance”: Archimboldo’s painting of the four seasons. “Happiness personified.” “The end of semblance. Arcadia before the coming of man.” 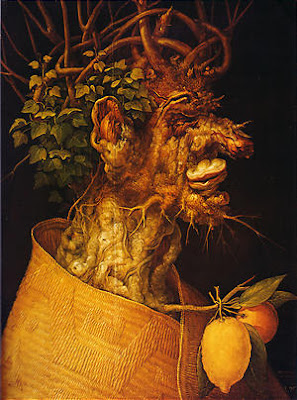 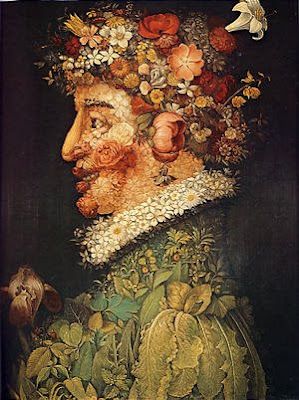 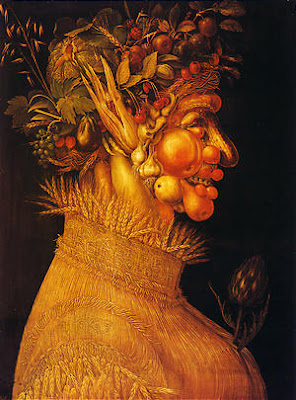 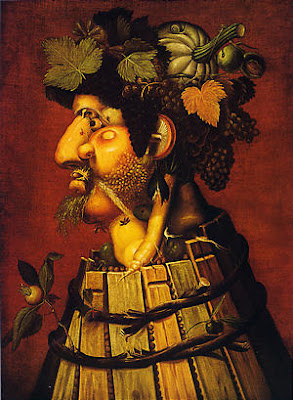 Some of Giuseppe Arcimboldo’s “composed heads” of the four seasons: “Winter,” “Spring,” “Summer,” and “Autumn.” The originals were painted c. 1563, for the Hapsburg emperor Maximilian, to whom they were formally present’d in 1569.