Though Sources (Turtle Point, 2008) is Devin Johnston’s third book—Telepathy (Paper Bark, 2001) and Aversions (Omnidawn, 2004) preceded it—there’s a somewhat tentative, off-stride sense to it. Johnston’s blessed with a naturally keen and unwavering sonic delivery—one I associate with Basil Bunting’s chisel-edged clarity—so that any diminishing of that standard looks immediately awry, noticeable, out of sorts. Here’s “Thunderheads”:

Days spent in the shelter of work
blow apart at dusk:

skirts rustle mimic rain
as shadows bloom across the draw;
a five-ton hammer taps
a crimped leaf; cutterheads
dredge voices through the wall.

Over Chattanooga
some latent thought unfolds:

What, I ask, is actually occurring here, bruit’d up and dash’d forth in what is, undoubtedly, a fine reticular phantasmagoria of sound? On verra. Work finish’d, out into the cloud-busk’d dusk, the titular thunderheads piling in a kind of cloud circus all along (above), presumably, the Tennessee River at Chattanooga, no? That’s the general sense. I “accept” the second stanza’s “skirts” and “draw” (drawbridge?) and “hammer” and “leaf” and “cutterheads” without difficulty: all likely river mayhem and scenery, large and small; all, too, likely cloud forms. I gulp momentarily at how the “five-ton hammer taps / a crimped leaf” (balking at an imprecision of scale—no “five-ton” “taps” anything—though I succeed in shooing it off by putting the hammer and leaf into cloud-cuckoo-land, “up there”). I am a little more disturb’d by the “cutterheads”—though to picture a cloud shaped like one, massive and thready and bladed and a spiral, provides a fierce delight—how they “dredge voices through the wall” (I’d hate to think of the voices being distant thunder, and the wall, what wall?) isn’t that a wrong note? The Chattanooga stanza locates one, and allows for the dispersal that follows (just as the title’d done for the earlier lines). The “latent thought” made cloudlike, or vice-versa. It’s in the next stanza that (for me) Johnston’s sonics overwhelm (engulf) its semantic push. Accepting pour le moment that thought manifests itself in, say, billows and explosions (as opposed to proceeding more or less linearly, with spur tracks off the trunk road, back-ups and roundabouts, &c.), the detonations into “a cauliflower dome,” or something topographically unmappable provides no particular difficulty: it is at the point where “redoubt” echoes “doubt” and “leaders” (rhyming with “heaped”) balls up into a knotty syntactical rat’s nest that one sighs, or scratches the implausibles, bereft. The lines turn in, become a kind of stronghold, withdrawn (a “redoubt”). (Part of my difficulty is in persisting in reading “crowd” for “cloud” and / or “readers” for “leaders”—as if Johnston’d suddenly took it to spoof Ashbery’s silly “Chinese” number, “On Autumn Lake” that begins: “Leading liot act to foriage . . .”) (One could argue that that’s entirely appropriate to the “action,” a kind of clot before the storm, intensity before the release of “the first thick drop” of the final stanza.) I read the final lines though with equal difficulty: why “thick”? how reconcile “core” and “stirs”? what is the relationship of “cabbage” and “Campbell” (there is a ballad that refers to a Bonny James Campbell whose horse returns without him), is “pelting river pearls” simply a way of representing the splash of rain against water, the way tiny grey spheres ricochet back up with each drop?

A semi-insane way to approach a poem, to be sure, to say nothing of a whole book. My sense is, though, that my response to the book is shaped by my difficulties in seeing beyond the riffs. As if there’s a choice unmade: that one make (out of audacious and rampant sound) in clear scenario, or, that (if one desires a slippery mischievous scenario), one keep the sounds and syntactical sleights mostly clear and evident. (Avoiding, that is, the temptation to load the veins with unnecessary ore, for the upshot is: the clottedness of, say, early Robert Lowell.) Here’s another, tinier, example:

The first line is clear enough. The second, though—if one reads the poem as equation akin to Pound’s “In a Station of the Metro,” as one nearly must, particularly with the presence of the rather archaic semi-colon there—although splendid in its music, particularly in the tch, z, ox, ch sequence in “pitchy xerox chafes,” is undeniably difficult to see. “Pitchy” catches the blackness of the birds, with hints of viscosity, “xerox” smudges the scene (“through cold fog”), “chafe” is, one supposes, allow’d if one notes the stickiness of “pitch,” but “chafes the dawn chorus” (that is, sounds of all the other birds, &c.) seems preposterously synaesthetic, the viddy’d battling the heard.

Nevertheless, in spite of my niggles, there are big pleasures in Sources. Johnston attends exceedingly well to details out of a variety of milieux: birds and the beckonings of the natural world, geographies domestic and wild, histories personal and not. He reworks some Propertius with terrific results (“Ghosts do exist: death is not entire. / A cloud of smoke escapes the funeral pyre.”) Here’s a finely work’d piece, two Homeric metaphors falling out rather effortlessly into a two-line tenor, the whole replete with subtle rhymes and hints of two kinds of “happiness to savor” in recall—one wallowing and splattered, one a little demure, restrain’d—the way it is with the ones we love:

As wild hogs, fresh from a wallow,
scrape against the trunk
of a telephone pole while rushing past
smearing their flanks
with creosote and leaving behind
stiff bristles and splattered mud;

or a cardinal intently crushes
carpenter ants in her bill,
then rubs their formic acid along
her coverts and tail,
staining that dim blush
with a streak of gloss:

you kiss hard, sure to find
some happiness to savor on the plane. 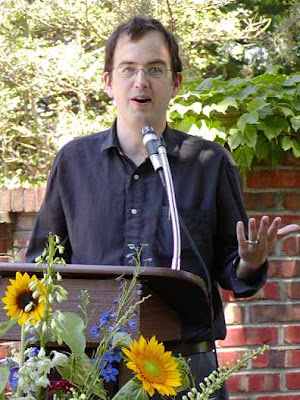