A History of Speech

In the Polaroid I’m slouching
I usually vote for anything strange
That book over there, the one on the shelf?
That’s me
There’s some broken toys too
Do you need them?
No but those are things of habit
Of drive, lament
I shouldn’t have mentioned it
Tell you what, I’ll throw in this sprig
Bet you keep chewing on it
Long after the flavor is gone
Here’s Broadway
Take my arm
It’s on the mend
Ten years ago I broke my big toe
And it still hurts
There’s the curb that did it

Pure jittery (quasi-manic) speech: I think of some (mostly late) Frank O’Hara (a good percentage of “Biotherm”—“and pretty soon I am smiling and doing just what I want / again / that’s very important / you put the shit back in the drain / and then you actually find the stopper”) out of William Carlos Williams (although with Williams one perceives speech most readily as something out of the mouth of the other—“from the mouths of Polish mothers”—“Doc, I bin lookin’ for you / I owe you two bucks.”) Or I think of Ted Berrigan in, for example, “Bean Spasms”—“Now this picture is pretty good here / Though it once got demerits from the lunatic Arthur Cravan / He wasn’t feeling good that day / Maybe because he had nothing on / paint-wise I mean.” Poet as slightly addled percept-machine, yakking (recording) at near percept-speed; poetry as what comes out of the mouth of the dexedrined body of an extraordinary mind. The quality (and style—“demerits” coupled with “lunatic” constitutes one measure of style) of the percept combined with the relation of percepts to each other is largely what determines the quality of the piece. I find Anagnopoulos’s poems herein a measure, partly, of how distant (and ignored) the salvos of things like Robert Grenier’s “I HATE SPEECH” outburst in This 1 turn out to be.

There is, I’d argue, and ad infinitum, a constant vacillating between a speech-based poetics and its opposite. A capsule history: Pound & Co. returning speech to the sclerotic Georgians (who’d attempt’d, vaguely, to resuscitate the dull sonorities of the Edwardians); the Agrarians (with Eliot’s aid) putting the kibosh to Pound’s version of Modernism by tepidity and withdrawal; the Beats and Olson and the other New Americans militating against such writ formal strictures, returning to speech; the watery post-New American / post-confessional lyrical “I” ditch’d (along with the body, the breath, and speech) by Language-writing. The paltry Flarf groupuscule and the “Conceptualists” (“ça existe vraiment, la conceptualisme, ou ç’est une plaisanterie de mauvais goût?”): both of Language-writing tendency: the Flarf body exists only to snicker at, a source of toddler pipi caca talk and poop-humor (see, offhandedly, Drew Gardner’s “marketing poopy will make about $20K when / you take Lloyd’s advice and DRINK THAT SEAWEED”); for the Conceptualists the body is a mere machine, robotic. (Various Sex Acts itself is square, with a rough brown cover stock, a “handmade” look. The cover typeface (letterpress’d) mimics some embroidery-style needlepoint, cross-stitchery in linsey-woolsey, to swell effect.)

The poems in Allison Power’s You Americans (Green Zone, 2008), a side-stapled, xerox’d number, with a fine Al Held painting in color gracing the cover, while less consistently speech-based, could be summon’d up, too, to push forth the argument for “the turn to speech” (thank you, Barrett Watten). Here’s “I Went There Then I Came Here”:

I’m not shaped yet. When the factory died the outer world crumbled. Boredom all life long. I know you’re suffering too. And I don’t feel sexy or even safe. More is less I guess. Sleep now. I’ll get into bed myself just for practice. I do adore you but then again it could be food poisoning. Something else about the factory: it was made of sticks so it’s no wonder. Those Cinderella mice moved out and got jobs in town. Grandma’s collage won an award. They were all there, shook hands and wagged tails. 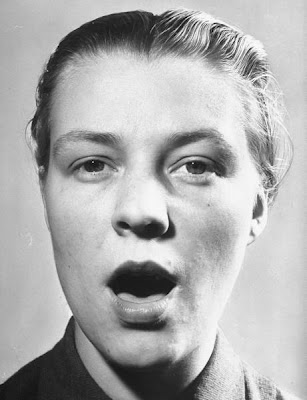