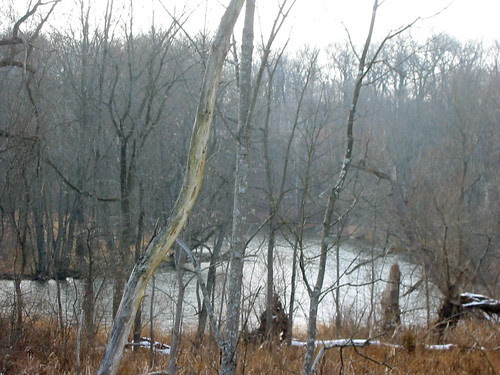 I remain disappointedly unconvinced by the work in Andrew Joron’s The Sound Mirror (Flood Editions, 2008), a book that announces its method in its title. Joron is doing with words in English something akin to what I like to think of Ezra Pound doing with the ideogram’d Chinese character in the corridor of St. Elizabeths—looking deeply into its commotion of strokes in order to ascertain its range of meanings. In Joron’s practice—the looking is in order to determine a word’s echoes, reversals, homonymics, and mimics—the slew of words contain’d within (what Vladimir Nabokov’d call the “laughter in the dark” whilst thinking “slaughter in the sun”). So: “rife fire”; so “Spilt into split, as sigh unto scythe—”; so “O tome, O tomb, I hum a hymn to home, to whom”—that kind of thing. Propel’d almost solely by such means (though there is a decided tendency toward the aphoristic, the maxim, too), Joron’s poems in The Sound Mirror begin to—as he puts it—“seem same seam.” Here’s the second piece in the book:

I Am the Door

I, my
being to begin, my die
To decide my deicide, am

by fear
Entranced before the door.

Or do I travel as travail of a veil?

This science
Is that séance of the shore, the unsure.

All word-dawn
is downward, so I raise
Reason to look to lack.

No (cure for suffering): no (furious core).

Because cause
is curled
In a burning world—
fact is also
act, a faked effect.

Call of the best beast, as mind is moaned—

As one commands the other.

(The system of a mystery
Threw this through that.)

Being of a bent and opprobrium that sees only lack of grace in any untoward refusal to pursue the music of a piece, I ask myself: why isn’t Joron’s a radical, constantly key-changing kind of music? Isn’t “Because cause / is curled / In a burning world—” working the hard c (echo’d later in “Call” and “command” and earlier in “cure” and “core”) against the r-color’d vowell’d er / ur sound (descending down out of “cure” and “furious” and “core”)? It is, it is. So? (I itch, I burn.) Against the recognition that all language is unnatural, I claim it—the pursuit of such rote and “seeable” music—is “unnatural”—a “faked effect.” The writing’s music must needs be something beyond “the system of a mystery,” must needs be the hot simoom battering its sandy abrasives at the howling ear, streaming in, must be trigger’d by (and trigger itself) a wilder, irregular “meaning.” Here, in Joron’s work, oddly enough, “system” reaches out to the nonsensical, eschews the vatic (“my die to decide my deicide” summons Lear, not Blake; “I travel as travail of a veil” is simply awkward). Hence, the unpersuadedness.

The final piece in the book is a longer sequence of eight pair’d items call’d “Citations from Silence.” Pairs (sound and its silence), bifurcations, or, as Joron puts it elsewhere, “two facing mirrors = infinity.” (The pieces put en face to mimic such mirroring.) Here’s two contiguous parts:

I tries trace (the right root), if & only if self falsifies (kite caught in the trees). He who looked to locked room. Trace to entrance.

I’s blindness bleeds to bells. To here, the banishment of sound. (To round, the bound of ruined.). Or mirror or mire, fire before ash.

All meaning about meaning (accepted but excepted X) cancels to reconcile.

By words (the birds of startlement), by salivating stars (salvational), the very nations end, the destinations send themselves.

“The Absolute Book will be composed of citations from silence.”

“Silence is at once immediate and remote. Its middle is missing.”

“Noise is not the antithesis of silence, but merely its most minor modification.”

“Silence is interior to itself.”

If the sound-work in the number’d parts is generally more subtle and various, less formulaic than in some of the other works, what is one to make of the citatory parts, each comprised of several axiomatic declarations, gnomic apothegms present’d as first principles? (Some of the lines traceable: see Blaise Pascal’s “Le silence éternal de ces espaces infinis m’effraie”; most, apparently, not.) Is one to read these in the manner of, say, the meditations of Edmond Jabès, or small essays of Ernst Bloch (whom Joron’s translated)? Or is the compilation—in its excess—meant mockingly: “There is only one silence” or “Silence always means more than it says” delineating a species of faux-profundity? (I recall a period in American poetry when the ephebes of Charles Simic fill’d notebooks with similar portents ostentatious regarding stones: “The stone needs no translation.”) Somewhere in Silence, John Cage notes: “Sound has four characteristics: pitch, timbre, loudness, and duration. The opposite and necessary coexistent of sound is silence. Of the four characteristics of sound, only duration involves both sound and silence. Therefore, a structure based on durations (rhythmic: phrase, time lengths) is correct (corresponds with the nature of the material) . . .” Andrew Joron is, in The Sound Mirror working emphatically with “the nature of the material”—reforming sounds by looking, “End by and & end—” What I miss though: the soul-impinging blast of the midnight freight, the outside barreling through with its sudden and unexpect’d delivery, something beyond the “mind-roofed rift” or riff, a turn away from the spectacle of the sounds.