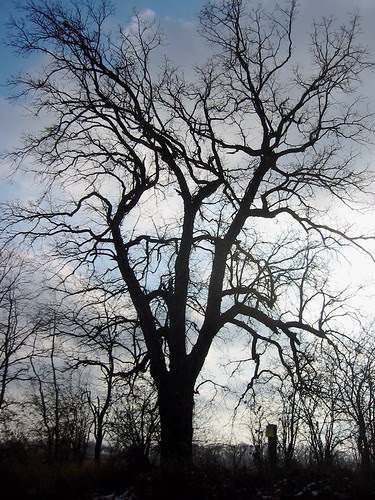 Some untrammel’d stretches of unmitigated fussing, dire do-nothingness, that unfocus’d jitter of book after book incapable of offering sustenance, that’s how it is. I do keep returning to Joseph Stroud’s Of This World: New and Selected Poems 1966–2006 (Copper Canyon, 2009) with its direct unpretentious lyrics. Here, a couple out of a sequence titled “Suite for the Common”:

The bluebottle fly lit next to the scratch on my arm
and with its probing tongue began to sip at the blood—
what Hamlet would call a reechy kiss. I brushed it away
into its brief world stewed in corruption where the sun breeds
maggots in a dead dog. No more marriage, Hamlet told Ophelia.
No more honeying and making love over the nasty sty.

The Words of Chilam Balam

On the first night of the world’s last days the foreigners come.
The quetzal sings no more, the jaguar flees, the deer are headless,
trees hang with the fruit of corpses, no priests can read the signs.
Gone the great wheel with its rose on whose petals are inscribed
the book of years—now these strangers with beards and pale eyes.
Prepare for whips and fire and blood and sorrow and sorrow.

With the note: “Chilam Balam: ‘Jaguar Priest / Prophet’—Mayan prophet of Apocalypse who lived to witness his prophecy with the coming of the Spaniards. The Books of Chilam Balam are all that have survived of the principal sacred texts of the Mayans.”

It was circular, like a clock, and where the numbers should have been there were scenes of people working in the factories of Detroit. Twelve scenes representing twelve stages in the production chain. In each scene, there was one recurring character: a black teenager, or a long-limbed, scrawny black man-child, or a man clinging to childhood, dressed in clothes that changed from scene to scene n but that were invariably too small for him. He had apparently been assigned the role of clown, intended to make people laugh, although a closer look made it clear that he wasn’t there only to make people laugh. The mural looked like the work of a lunatic. The last painting of a lunatic. In the middle of the clock, where all the scenes converged, there was a word painted in letters that looked like they were made of gelatin: fear.

And in the jump rope song:

The mural reworking the Edsel Ford-order’d Detroit Industry fresco cycle of Diego Rivera in the Detroit Institute of Arts, the jump rope song a chill hint of the onslaught to come with the lists of women murder’d in Santa Teresa, los desaparecidos.

Eugène Delacroix, in a journal, dated 14 May, 1824: “Men of genius are made not by new ideas, but by an idea which possesses them, namely, that what has been said has not yet been sufficiently said.” That quoted by Evan S. Connell, in the terrific Francisco Goya (Counterpoint, 2004) He’s talking about the six years between the Madrid executions (by French troops under Lieutenant-General Murat—Connell’s chisel’d version of the triggering May second (1808) outburst: “Whatever the provocation, Madrid exploded. Never mind the disparity: unarmed civilians confronting Napoleon’s experienced troops. Madrileños snatched up anything lethal—ox-goad, butcher knife, rusty sword, blunderbuss, cudgel, bayonet, hammer, pitchfork.”) and the “execution” of Goya’s paintings of the events, titled The Second of May, 1808 and The Third of May, 1808. Connell’s assessment of Goya, though, points to no exemplary hero, noting how he only start’d work on the paintings after seeing a print titled The Third of May by “a minor artist, Isidro González Velázquez.” And:

Except for a growing hatred of war he may have been uncertain how he felt. He saw the result of French occupation; he knew the Spaniards retaliated with equal ferocity. In 1808 he was sixty-two years old, not an age when he would be expected to cut a Frenchman’s throat. Nor did he publicly declare himself. The important thing was to go on drawing and painting. He kept no diary, nor did he confide in anyone; if he did, his thoughts and feelings weren’t recorded. Good capitalist that he was, few matters concerned him so much as preserving his wealth.

So goeth the fussing, unmitigated. Plink-plankingly the winter rain chortled through the night, or, muzzling itself, turn’d to snow and deliver’d up a birdless morning, and somewhere in the geography of sleep a mouse-thief stole the smudge of peanut butter off the trap, the spring-action wound too tight, the lever too wedged-in, it’s okay, it’s the continuing is what counts, reechy and wet and besieging . . . 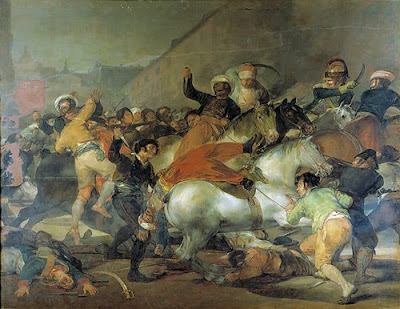 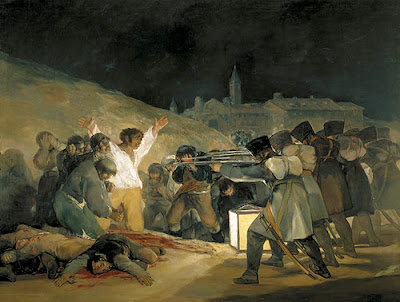