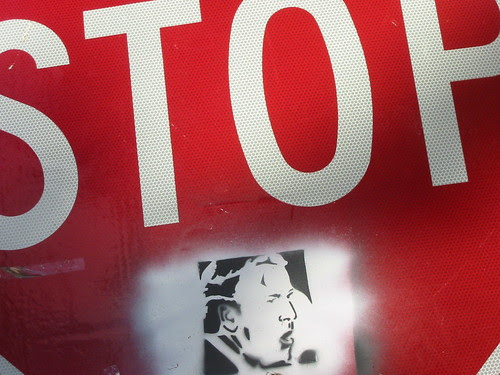 Thomas Pynchon (Against the Day), stirring the soul-clench of feeling (something he’s regularly accused of being incapable of, or refusing) writing about the risks and heartaches of invisibility—one alternative to the “suburban imperative”—for one Anarchistickal crew in New Orleans (who’d been arguing, earlier, “about Bakunin and Kropotkin, remaining for the most part . . . easygoing no matter what disagreement might arise, because it was important not to draw attention. It was the U.SA., after all, and fear was in the air . . .”):

The night before Wolfe sailed, he, Reef, and Flaco stood down by the river, drinking local beer out of bottles and watching the fall of night, “weightless as a widow’s veil,” observed the young Irishman, “and isn’t it the curse of the drifter, this desolation of heart we feel each evening at sundown, with the slow loop of the river out there just for half a minute, catching the last light, pregnant with the city in all its density and wonder, the possibilities never to be counted, much less lived into, by the likes of us, don’t you see, for we’re only passing through, we’re already ghosts.”

Though one’d note, all embourgeoisie’d up here with a clerkship (one “holwe, and therto sobrely . . . litel gold in cofre”), that the reason the passage moves one so, is how one, workday done, exits the library daily into just such abscond’d light, light blotter’d up, light that says another day’s done pulled into the station no train’ll leave again. A horrible four o’clock region when grease-shiny death stalks the matte world. Invisible glory dying in the dustbins of accumulated havocs ne’er wreaked . . .

Translated into a run of ska skippiness—uptempo, Brixton’d, interminable in the all-embraceable brainpan—Pynchon’s “suburban imperative” becomes a loop of “So you think that you’ll be happy / When you’re hanging out the nappies / If that’s a happy marriage I prefer to be / Un-hap-py!” With a sailing snappy under-lyric, the bit about Mr. and Mrs. William Blake in the garden: “Naked woman, naked man / Where did you get that nice sun tan?” (The Specials, c. 1979.)

I see Pynchon’s come to the defense of Ian McEwan, author of Atonement, accused of plagiarism, in a letter to the Daily Telegraph, stating simply enough that using the odd “engaging detail” is “simply what we do”:

Given the British genius for coded utterance, this could be about something else entirely, impossible on this side of the ocean to appreciate in any nuanced way—but assuming that it really is about who owns the right to describe using gentian violet for ringworm, for heaven’s sake, allow me a gentle suggestion. Oddly enough, most of us who write historical fiction do feel some obligation to accuracy. It is that Ruskin business about “a capacity responsive to the claims of fact, but unoppressed by them.” Unless we were actually there, we must turn to people who were, or to letters, contemporary reporting, the encyclopedia, the Internet, until, with luck, at some point, we can begin to make a few things of our own up. To discover in the course of research some engaging detail we know can be put into a story where it will do some good can hardly be classed as a felonious act—it is simply what we do. The worst you can call it is a form of primate behavior. Writers are naturally drawn, chimpanzee-like, to the color and the music of this English idiom we are blessed to have inherited. When given the choice we will usually try to use the more vivid and tuneful among its words . . . Gentian violet! Come on. Who among us could have resisted that one?

And where, is it in Slow Learner, or did someone relay it to me, the morsel about Pynchon’s reliance on an ancient Baedeker for the excrescence of local details in some of the earliest stories?

“Your own Benjamin Tucker wrote of the Land League,” a young man was saying in an unmistakably Irish voice, “in such glowing terms—the closest the world has ever come to perfect Anarchist organization.”

“Were the phrase not self-contradictory,” commented “Dope” Breedlove.

“Yet I’ve noticed the same thing when your band plays—the most amazing social coherence, as if you all shared the same brain.”

“Sure,” agreed “Dope,” “but you can’t call that organization.”

Elsewhere, self-reliance, the frontier, the standard northamerican value-stock, graft-sturdy, Mark Twain’s “lightin’ out for the territory” Jack Kerouac’s road, and hints of a ’sixties nostaligia in a (minimally chop’d) riff about various travels of Reef and Estrella “Stray” Briggs:

If you took a map and tried to follow them over it, zigzagging town to town, back and forth, it might not have been that easy to account for, even if you recalled how wild, how much better than “wild” it’d been not all that many years ago, out here, even with the workdays that had you longing for the comforts of territorial prison, yes hard as that, when whatever was going to become yours—your land, your stock, your family, your name, no matter, however much or little you had, you earned it, with never no second thoughts as to just killing somebody, if it even looked like they might want to take it . . . waking up each day never knowing how you’d end it . . . when any ailment, or animal wild or broke, or a bullet from any direction might be enough to propel you into the beyond . . . why clearly every lick of work you could get in would have that same mortal fear invested into it—Karl Marx and them, well and good, but that’s what folk had for Capital, back in early times out here—not tools on credit, nor seed money courtesy of some banker, just their own common fund of fear that came with no more than a look across the day arising. It put a shade onto things that parlor life would just never touch, so whenever she or Reef pulled up and got out, when it wasn’t, mind, simple getting away in a hurry, it was that one of them had heard about a place, some place, one more next-to-last place, that hadn’t been taken in yet, where you could go live for a time on the edge of that old day-to-day question, at least till the Saturday nights got quiet enough to hear the bell of the town clock ring you the hours before some Sunday it’d be too dreary to want to sober up for. . . . So in time you had this population of kind of roving ambassadors from places like that that were still free, who wherever they came to rest would be a little sovereign piece of that faraway territory, and they’d have sanctuary about the size of their shadow.

That’s part and parcel of Greil Marcus’s “old weird America” in its noise. It’s akin to what Amiri Baraka’s seeing gone missing of late in the spit-shined poetry parlors of these states (“The entire generation of artists who actually worked to register some understanding of ‘the great outdoors,’ i.e., the real world (outside the classroom) & all its bloody turbulence and contradiction, have been systematically kicked to the curb . . .” see the recent Poetry Project Newsletter (No. 209)). It’s not too skew of Randolph Bourne’s complaint of how “the real mischief” is “to get your infallible divine truth confused with your pragmatic human truth”—and that’s not just the imbecile Bush and cronies with they literal Divine, but anybody ’s thinking they got a Way to Proceed—something professedly Infallible like that ’s liable to end up first an Iron Boot (a stasis) and then an Iron Boot pressed against Somebody’s Neck (an obstruction and injustice). Stay nimble, cohorts, and move.