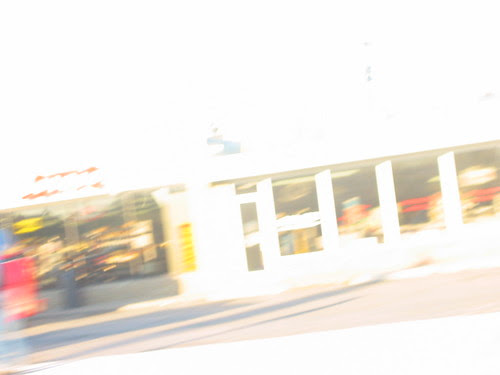 William James on ‘pure experience,’ (being “the immediate flux of life which furnishes the material to our later refection with its conceptual categories”):

Only new-born babes, or men in semi-coma from sleep, drugs, illnesses, or blows, may be assumed to have an experience pure in the literal sense of a that which in not yet any definite what, tho ready to be all sorts of whats; full both of oneness and of manyness, but in respects that don’t appear; changing throughout, yet so confusedly that its phases interpenetrate and no points, either of distinction or of identity, can be caught.

Exactly what one seeks to regain in the booze-stupor of writing itself, that continuum “ready to be all sorts of whats.” It’s a necessary diminishment (focus) of the world’s rabidness, its snarling thereness, that provisional trancelike state of writing. It’s arrived at through itself, that is, one writes oneself into it, though, once, I might’ve argued (and did), a squat sweaty tumbler of bourbon making rings on the table next the typewriter’d get one off into that hinterland. (Or, braining oneself with a dictionary.) (Or pushing one’s atrophy-self, replete with vestigial-sleep, to the ordinary workbench.)

My next book’ll be call’d “All Sorts of Whats.”

Deep-foundering in the ruckus-territory of Pynchon, and notes collecting without the wherewithal to typewriter them together (dent’d, ding’d, an’ sich’d they be, in the wash of attention, the tutelary goods—and gods, ye gods—abash’d, I never did read without seeing the material words, I start’d Nausea a good century of times, always shock’d that, reaching the second sentence, the first sentence ’d vanish’d, I want’d them all present and perceivable, not listlessly trailing along for “sense,” I want’d a simultaneity of sentences . . .)

A couple of “items” finagling my attention.

The energetic Mary Ann Caws ’s written a book call’d Surprised by Translation (University of Chicago Press, 2006)—what looks to be part memoir, part translation-theory, with chapters about Mallarmé translating Tennyson, Pound’s Rimbaud and Arnaut Daniel, Virginia Woolf’s Clara Malraux, Yves Bonnefoy’s Shakespeare, Keats, and Yeats, and Beckett’s Beckett. Caws’s focus is on the “wrong,” the “non-mimetic,” “slippage,” translations with “something odd about them.” A paragraph on Beckett’s rendering of the final line of Apollinaire’s “Zone”:

This “soleil cou coupé” has seen more ink running than any blood that ever poured from any severed neck. The sound “cou coupé” mocks us like a guillotined cuckoo and blazes with drama, providing the visionary verbal shock. The usual translations give just variations of the “sun severed neck.” But Beckett’s “Sun corseless head” of 1950 leaps from the page to strike the same harsh blow that the beheading itself does, and we hear in the “corseless” or necklace of that echo of a corpse so unmistakably marking the end of a beginning. For this 1913 poem was at the beginning of modernism as we know it, and this 1950 translation renders it, and modernism, newly.

(I’m not entirely convinced by some of Caws’s claims here—what is that “necklace” doing there exactly, and what “end” if the translation renders modernism “newly”?)

In the early 1960s, the American composer Robert Ashley conducted a long interview with Feldman, part of which was published in the New York literary and arts quarterly, Kulchur. Ashley also made a performance piece out of the published excerpt—essentially a piece that recreates the interview. He called this piece, Morton Feldman says . . .

(The original interview is lost, the Kulchur-publish’d excerpt is included.) Feldman (in the Ashley excerpt (1964), finding a way to club himself on the head—see William James):

And, on the pointing of young composers towards the university:

. . . all the time you feel that the young composer has immorally been given the moral licence to lead a parasitic life. You find the same thing in the universities. You find it in important centres like Tanglewood, where they’re given this immoral basis for a really unproductive life. . . . What the schools and the important pedagogues are doing is just perpetuating a tragic syndrome, a tragic misunderstanding about what it is to be a composer. But then, perhaps they don’t think of themselves as composers. I think that composing for them is just an incidental activity in the power struggle of ideas. You used the word ‘sick’. The word ‘sick’ is not sick enough. There’s a perpetual cultural insanity feeding itself on everything it can use, without any feeling of obligation.