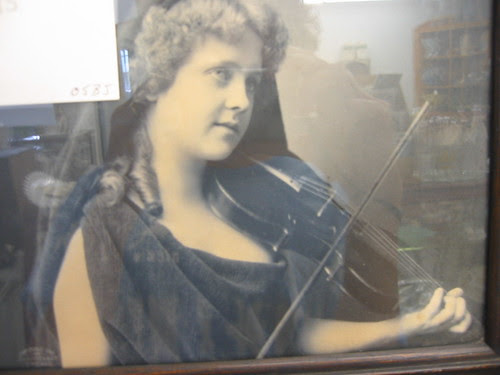 The ukulele, strummed or unstrummed, shows up in Against the Day with near-equal regularity as the mighty moustache. One explanation is proffer’d by one of the aeronauts, Miles Blundell, relating a post-lecture (topic: “the four-note chord in the context of timelessness”) conversation he’d had with one Ryder Thorn at Candlebrow U.’s summer ukulele workshop:

“We had quickly discovered our common love of the instrument . . . and discussed the widespread contempt in which ukulele players are held—traceable, we concluded, to the uke’s all-but exclusive employment as a producer of chords—single, timeless events apprehended all at once instead of serially. Notes of a linear melody, up and down a staff, being a record of pitch versus time, to play a melody is to introduce the element of time, and hence of mortality. Our perceived reluctance to leave the timelessness of the struck chord has earned ukulele players our reputation as feckless, clownlike children who will not grow up.”

Exactly, one notes, the argument against narrative, and for the oft-derided-of-late death-defying lyrical outburst: anything putting things in relation simultaneously like, ahem, metaphor as opposed to, um, metonymy in its trudging serial boots. (I love to o’erleap the tracks the vehicule is riding down.) Exackly, erm, too, the cautionary note appended to so much review-gabble concerning the Pynchon, “feckless, clownlike,” refusing to grow up.

Ukulele: one around the house when I ’s a kid. Probably something my father’d acquired in tail-end-of-WWII San Francisco. (Too, he’d an ocarina—a “sweet potato”—another “joke” instrument, provided with naught in the way of a repertoire for the “serious player.” Concerto in D minor for Ukulele and Ocarina.) I recall now the ukulele’s “plectrum,” ever tuck’d between strings and fingerboard—a rather blunt monstrous felt-cover’d inflexible thing, about the size of a club cracker, not made for plucking, certainly—one could only bash aimlessly with it. And the tuning-mnemonic: “My dog has fleas.”

In my youth-rootless years, friends and I took to admiring Pynchon’s inveterate lack of “address”—stories skimmed off the airwaves of him staying here and there in cheap hotels, “prolonged periods of ‘no fix’d address,’” or going off in a sudden fever somewhere to ascertain for himself some precise shade of red brick, to see how a particular shadow got “thrown,” &c. In Against the Day painter Hunter Penhallow, in Venice, conscious of the ways of the airwaves, the ghosts, “staying in a hotel room in Dorsoduro,” arguing its efficacy against the pensioni, and adding:

“. . . one has the company of eminent ghosts, Turner and Whistler, Ruskin, Browning sorts of chap. . . ‘traces of consciousness’ . . . Transient beds for some reason are able to catch and hold these subtle vibrational impulses of the soul. Haven’t you noticed, in hotels, the way your dreams are often, alarmingly, not your own? . . . especially in these smaller places, where the bedstead tends to be of iron or steel, enameled to keep away the cimici [bedbugs, though also ‘bugs’ design’d for eavesdropping]. Somehow the metal frame also acts as a receiving antenna, allowing dreamers to pick up traces of the dreams of whoever slept there just before them, as if, during sleep, we radiated in frequencies as yet undiscovered.”

Penhallow’s encounter with Andrea (“To reveal the Future, we must get around the inertia of paint. Paint wishes to remain as it is.”) Tancredi, convert to Divisionism, a kind of motorized pointillism, Signac with animus, Seurat with heat. Tancredi:

“Of course it’s to do with Time . . . everything that we imagine is real, living and still, thought and hallucinated, is all on the way from being one thing to being another, from post to Future, the challenge to us is to show as much of the passage as we can, given the damnable stillness of paint. This is why—” Using his thumb against a brushful of orpiment yellow, he aimed a controlled spatter of paint at his canvas, followed by another brushful of scarlet vermilion and a third of Nürnberg violet—the target patch seemed to light up like a birthday cake, and before any of it could dry he was at it with an impossibly narrow brush, no more than a bristle or two, stabbing tiny dots among larger ones. “The energies of motion, the grammatical tyrannies of becoming, in divisionismo we discover how to break them apart into their component frequencies . . . we define a smallest picture element, a dot of color which becomes the basic unit of reality. . . .”

And Hunter notes how the “dots” ’re “behaving dynamically, violent ensembles of energy-states, Brownian movement. . . .” All that reminds me somewhat of however Frank Zappa talk’d about music, notes as “agitated pieces of air” or something, or, “adding air to the air?” How would that look caught on the tongs of mandibles (or the “mind-forged manacles”?) where poems break against the breakwater and’re squeezed into the world? A poem of changeable vocable hum? Chordally-adapting to circumstance? (See Emily Dickinson, her +’s and variants.) The damnable endings of poems when all’d better remain salt-spray and fever. Unh.