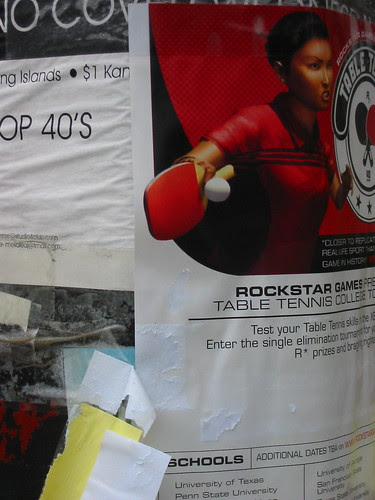 There’s a famous photograph of Black Panther Party members raising their fists at the art deco monument of the Alameda County Courthouse. I was in the crowd of supporters that witnessed that salute.

It’s a little late in the day for throwing down one’s street credentials, is what my initial splutter is to Barrett Watten’s highly defensive reaction to Juliana Spahr’s first read, and reread, of The Grand Piano’s premier tome numéro un. Is there anyone who believes that admitting to being a participant in a “crowd of supporters” (as opposed, one guesses, to “a rubbernecking onlooker”) to a “famous photograph” (calling Baudrillard, calling Baudrillard!) is liable to any “political risk,” today, or yesterday? Methinks the import of Watten’s “actions” grows, mostly, inside ’s own big head. He writes: “I witnessed or was a participant in many political acts connected with the politics of Black and Third World liberation as a student in Berkeley in the 1960s, was tear-gassed at these demonstrations, saw myself as politically informed by their terms.” Tant mieux that all that tear-gas ’d come to “inform” life in a tony northern suburb of Detroit.

Admittedly, I am curious to read The Grand Piano, uncertain though I be regarding the rational behind the somewhat-vaunted (by Watten) serial dolloping out of its pages. Seventy-nine by count in the first installment: totting up to seven or eight pages per contributor. Room enough for what, broad-stroke sketchy impressionism? A quick insight-rigged anecdote? Incitement to a presumed following? I’d intend’d (and rather hanker’d) to subscribe to the thing, and may, though suddenly at $12.95 a pop, it seems so, well, meagre. Watten: “We . . . are writing an “experiment in collective autobiography,” whose nature is unfolding in the terms of the work itself, but also as we . . . will find out what it is we are doing through the eyes of others.” And, later: “As an act of serial publication, The Grand Piano continues—and part of its work is to open the text, in and as a construction of group identity in the past and in the present, to readings . . .” Dandy. And fits the Barthesque “writerly” model. (One ’d want to ask Watten, though: why the antiquated technological fanfare of print seriality, if what’s desired is something participatory and open? Why the one thousand bound “Mode A” documents dealt into a few mitts, when one could put it online for all?) (In the cold sleepless Michigan night I consider’d—giggling to myself—if the Watten / Grand Piano press oughtn’t rather be named “Model A”—indicating an advance stylish without being mechanical, “presenting a thoroughly modern face,” and “staving off competitors.” See Watten as Henry Ford.)

I find the fact of Juliana Spahr’s being “asked to withdraw” a comment curious. How is that done? Erasure? Justificatory waffling? Deceit? I find the fact of Spahr’s being “called out by 10 people” on the issue alarming. Is that evidence of a concerted campaign? Did each of The Grand Piano’s ten authors ask for that withdrawal? It’s ironic that the apologists for “language-center’d” writings, the theory-steep’d ones, those who’ve taught “us” that “we”—like action-figures hurling ourselves, hard-hat’d and workboot’d, into the site of the text—construct meaning, complete the edifice in partnership with the author—, it’s ironic that that should seem to break down nigh-completely at the point of personal history, individual or not. Perhaps, finally, the legacy of language writing’ll lie in a new model of “reception control,” the kind of innovation no true community tends to, or needs.

(A side note. A precedent to The Grand Piano is Leningrad: American Writers in the Soviet Union, a collaborative travelogue / conference report (1989) by Michael Davidson, Lyn Hejinian, Ron Silliman, and Barrett Watten. All that era’s glasnost—“we” recall that meaning openness—goes asunder if one believes Kent Johnson’s persistent tale of how, participant to the same proceedings, he is written out of the story.)