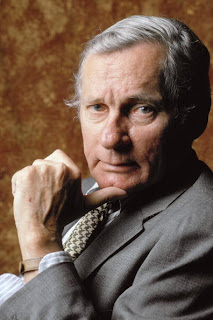 Of The Letters of William Gaddis. Out of a 4 May 1951 letter to painter John Napper, written aboard the Norwegian boat the Nyhaug, during Gaddis’s return voyage to the States after two and a half years in Europe:

(And on the deck of the drumming liner Watching the furrow that widens behind you You shall not think ‘the past is finished’ Or ‘the future is before us’) one recovers slowly and privately the shell of empty laughter, laughter which recalls nothing and words and gestures without past or future, except insomuch as they exist in the minds of those on the dock, on the pierhead, waiting for the recognition which they feel implicit in the circumstances, —one recovers this shell, prepares to inhabit it, present it in rooms to those who spend their lives in rooms; prepares experiences, taken however seriously then, we missed the meaning, for expenditure in conversation which dies on the dead smoke exhaled, stagnant, the experience tossed off that easily and the meaning never again questioned . . . so one comes ‘home’.
No; it is not all that easy, nor so soon done with: what brought us away takes us back; and persists to point us away again: the past is not finished nor the future before us. Though for all that, I dread the day when voyages cease to have their significance for me, when I know with my heart what I know now with Mr Eliot’s mind, that the way up and the way down are one and the same; better cultivate the infinite mind, and preserve the temporal heart, in which voyages still do have directions, fight against the weary sagacity of the seaman to whom directions are simply matters of distance and of days, and ports of climates and cost of entertainment. Never, I hope, to attain to that peak of sophistication where movement across water is simply a matter of adjusting one’s watch, where crossing the Atlantic ocean is as significant as a busride to Battersea.

Such Weltschmerz for a man still two years shy of thirty. The Eliotic rhythms—the opening parenthetical repeats lines out of “The Dry Salvages”—pervasive and unmistakable. “The way up and the way down are one” a rendering of Eliot’s line therein “And the way up is the way down, the way forward is the way back.”* In a fragment of a letter to artist and writer Sheri Martinelli (assigned a date of “[Summer 1953?]”), Gaddis writes of how “the present is every moment reshaping the past, so that any instant is liable to come up with the verdict, I was wrong all the time! or, I was right all along . . .” A line reasserted in The Recognitions (1955): “every instant the past is reshaping itself, it shifts and breaks and changes, and every minute we’re finding, I was right . . . I was wrong, until . . .” In Agapē Agape (2002) Gaddis writes (in a context of “the artist as confidence man” and the “frenzied metaphor of mechanization reaching everywhere, of art without the artist”) of “fading into that bed of shades, those imitations and shadowy images of gossip where there is no present moment but only the next one being devoured in the immense maw of the past, where immortality finds its home at last, where the voice has dwindled to the dry scratch of a grasshopper . . .” A seeming reversal, unsolaced and grim.

In the throes of revising the nearly half a million word manuscript of The Recognitions. Out of a 4 January 1954 letter to Napper:

By now you may well think that if our correspondence continues I’ll still be writing you in five more decades, that I’m still working hard on the same thing, same damned book, same parade of megalomania, for I still am scrabbling along on the thing you read ch. I of so many years ago at Chantry Mill. Last winter in an empty farmhouse was to be the end: I emerged in May with the woodchucks and a 15-pound manuscript, which dampened Harcourt-Brace’s spirits more than somewhat, but they’ve given money, money, all of it gone now and nothing to show for it but a bowler hat and a fourteen-&-three-quarter pound MS. They think I’m cutting it, but what I seem to be doing is to take out something I thought was amusing 4 years ago, and put in something equally idiotic which I find amusing now. At the moment it’s spread all over the floor, and is quite impressive if only in square feet. But honestly, it’s about over, the whole extravaganza. Another 6 or 8 weeks, they want the thing and I wish they’d take it, I am so tired of it, have entirely lost interest in every bit of it, and being quite assured that I’m never going to make any more money from it, would so happily forget the entire evidence of wasted youth. Such low spirits have persisted for some months now; but I look for a change of some sort when I do get this thing off my hands, and start looking around to see what I’m going to be when I grow up. (And not as the Duke of Gloucester had it, —Another damned, thick, square book! Always scribble, scribble, scribble! Eh! Mr Gibbon?)

Editor Stephen Moore reports that Gaddis likely found the anecdote of the Duke of Gloucester’s purported remark to historian Edward Gibbon in The Oxford Dictionary of Quotations (1949), a book Gaddis owned (and frequently used). A 1974 number (13 / 14) of Antæus printed a section of Gaddis’s novel J R (1975) under the title: “Untitled Fragment from Another Damned, Thick, Square Book.”

You cannot face it steadily, but this thing is sure,
That time is no healer: the patient is no longer here.
When the train starts, and the passengers are settled
To fruit, periodicals and business letters
(And those who saw them off have left the platform)
Their faces relax from grief into relief,
To the sleepy rhythm of a hundred hours.
Fare forward, travellers! not escaping from the past
Into different lives, or into any future;
You are not the same people who left that station
Or who will arrive at any terminus,
While the narrowing rails slide together behind you . . .

Is William Carlos Williams’s “The Descent”—beginning “The descent beckons / as the ascent beckoned. / Memory is a kind / of accomplishment, / a sort of renewal / even / an initiation, since the spaces it opens are new places / inhabited by hordes / heretofore unrealized, / of new kinds— / since their movements / are toward new objectives / (even though formerly they were abandoned) . . .”—a reply to Eliot’s lines?