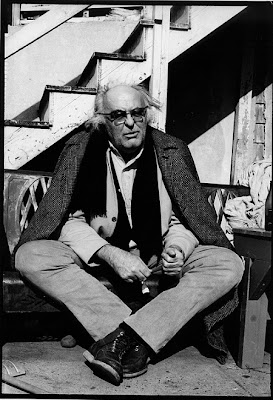 Dilatory, and aimlessly looking for something (I forget now what) some weeks back, I found this odd squib by Barrett Watten—and retrieved it—out of the “Contributors’ Index” appended to the Anne Waldman-edited Out of This World: An Anthology of the St. Mark’s Poetry Project 1966-1991 (1991):

Thinking back on The Poetry Project, I am reminded of an absurdist question posed by Gerard Malanga to Charles Olson in The Paris Review: “A school is a place where one can learn something. Can a school lose by giving away its knowledge?” From my first involvement with it in about 1972, The Poetry Project seemed a place where a school of poetry—the New York School—was physically embodied in a group of writers who felt free to develop in the confidence of their mutual (and contending) assumptions, and I certainly learned something from that. Its “effect on my writing career” came directly from the social confidence of that school, its urban directness and aesthetic autonomy, which I consider to be unique in American literature. Yet at the same time its literary moment seemed fragile, and in “giving away its knowledge” it did not seem able to reconstitute itself as an unambiguous cultural fact as the seventies turned into the eighties. Perhaps it could have been otherwise; rather than a romance of beginnings that turned into a looking backward to sources in the Beats—as, say, Ted Berrigan’s interpretation of his work veered from the terrorist implications of cut-up to the recuperative ones of autobiography—there might have been more of an opening, for instance, to issues in other arts and modes of thought, to a wider intellectual life. This may be more of a problem for poetry in general than for The Poetry Project, so I would say that the question of a school changing as it gives itself up in the course of its development (and I can think of other schools) has led me to a desire for a literature less insular in its relation to everything else! But for an anecdote, how about this: the first thing I did when I got to the East Coast, as a student at MIT in 1965, was to go straight to the church, where Lee Crabtree offered me a swig of the crême de menthe he was drinking while playing piano for the Fugs, and I’m sure that changed my life.

The Crabtree anecdote, veering between modes—one trucklingly earnest and starry-eyed, the other maybe a little mocking (how read “I’m sure that changed my life”?) redeems little of the statement’s anxiety about history and control betrayed by that curiously fraught—no longer, apparently, “absurdist”—idea, that “in ‘giving away its knowledge’ it did not seem able to reconstitute itself as an unambiguous cultural fact.” What, pray tell, is an “unambiguous cultural fact”? An institution? What a curious thing to bereave. Unless, of course, one is determined to become one oneself. (See The Grand Piano.) To bemoan the fragility of a literary “moment” is to deny outright the ways of literary change, the lingo (and all its “current” artefacts) itself an unmoored proviso, a temporal git. In the context of the Paris Review interview whence Watten cobs the Malanga line, an increasingly prickly and insulting Charles Olson makes it utterly clear how little he cottons to “schools”:

INTERVIEWER: What constitutes a school of poetry?

INTERVIEWER: Is the function of a literary—

OLSON: That sounds dirty as hell. Maybe we can take that to the Supreme Court. Yeah, I heard you. Continue without repeating it.

INTERVIEWER: Is the function of a—

OLSON: He’s already conditioned. It’s like a reflex. Atlantis will arise again. Go ahead. God’s with this boy.

OLSON: That’s a dumb sort of block historical question, if I may say so, and typical sort of a Columbia twentieth-century question.

INTERVIEWER: A school is a place where one can learn something. Can a school lose by giving away its knowledge?

OLSON: Oh boy, that’s beautiful. That’s a lovely question. It’s really such a lovely question. Jesus God. I see it. Right through the solar plexus as the pantheon of Black Mountain pharaoh of the exile . . . We all went on to the other fields, other Bull Runs. It’s a marvelous question, though.**

INTERVIEWER: Is a school of poetry necessary in order to gain attention for a group of poets’ work or is it a handicap?

INTERVIEWER: I’m talking about schools of poetry in terms of such as the so-called New York school of poetry, if you’ll pardon the expression.

OLSON: All right, so name them. Poets have no reason to be in the marvelous ITT thing or Inter-World Aviation.***

Upshot of the New York School’s highly admired “social confidence” and “urban directness”: Watten’s anxious and maladroit (“He becomes you, as ‘retrograde hero “having nothing to say”’ can’t tell what ‘it’ is . . .”) piece in the anthology. Called “Statistics,” with a machine-made aura to it (and a particular English department smell—“Circumstances of this writing assume . . .”), it begins—

There is no language but “reconstructed” imaged parentheses back into person “emphasizing constant” explanation “the current to run both ways.” The ocean he sees when as “sour frowns of the ancients’ ‘signifier’” that person jumps in. We are at liberty “to take ‘the’ out of ‘us’,” to have selves “not here” in the machinery of dramatic monologue to “smash, interrupt.”

Disregarding if “citizens worth not one cent” listening can’t speak for us “circuits not all there” themselves, he “whatever may be ‘wanted’” loves to talk. “Let me in” pushed between “to have intelligibility” hopeless repetition “which takes you away.”

* One reads a wholly different interview in the Ralph Maud-edited Muthologos: Lectures and Interviews (2010). There, Olson’s reply reads:

“What does not” is a reference to the opening line of Olson’s poem “The Kingfishers”: “What does not change / is the will to change . . .”

** According to the Muthologos transcript, Olson actually makes three replies to the (repeated) question, the initial two answers being elided by the Paris Review. One:

Right. Jesus, god. I feel—if you don’t mind, you stabs me right through the solar plexus. [LAUGHS] As the pantheon of Black Mountain or the Pharaoh of the exile, I say, like, that was the whole conundrum wasn’t it? So why did I do it to ’em? Why would anybody do it? We all went on to other fields, other Bull Runs, on the insight I had. It’s a marvelous question, though, something like Suzuki or something: do you stick your sword in your belly or do you, like, use the top side of your head? I mean, it’s a marvelous question.

It is. And it’s very exciting. In fact, it’s the most exciting question I think really you’ve asked tonight, because it raises that whole sort of—no longer a dilemma at all, may I say? No longer absolutely that bullshit, but just an absolute . . . Wow, that’s a beautiful question, like it’s tck-tck-tck. O.K. Do it again, it’s so nice really; but I mean really it’s like a song, like when I put the two quarters in your hand, it’s the same, just these two, and bejesus if she ain’t eleven, if I’m not mistaken, yeah? Nine ten eleven here, old P.R., P.R., no longer longer P.O., nor P.A. either.

Tedium of the self-proclaimed and -satisfied “Pharaoh.”

All right, so name ’em, and to—I don’t think so, I think it’s an error of peinture. Poet have no reason to be in a quoroth. [Maud suggests “quoroth” is “a neologism based on ‘quorum.’”] If they do, it’s some marvelous sort of ITT thing or interworld aviation. I mean, it’s a very great difference between the speed question of music and poetry as against that fucking goddamn—and don’t you think I don’t love it, but I suppose, like Bill Williams, I wish I’d been a painter, I wish I could have painted or something. But it doesn’t matter, fuck it. It’s bullshit, it’s not interesting. I mean, sculpture, like that dumb thing, this the Civil War veterans, this is gray in the light . . . uh-ru-de-uh.

Reading the Muthologos transcript against the Paris Review interview, I wonder which of Watten’s seemingly opposed figures to apply to each—“the terrorist implications of cut-up” or “the recuperative ones of autobiography.”