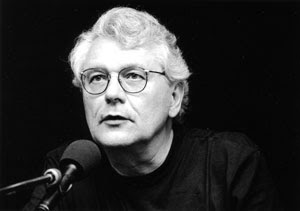 Extremes of lassitude and feverishness—signs of a restlessness. Long lazy study of the sky’s distant regalia of blues. A crane fly—family Tipulidae—gangly in the morning air. Reading in intermittent spurts, patience and sustenance athwart.

I’ve been so overwhelmed with work, and the mountain of the Unread has piled up so, that only in these days here have I really been able to settle down to your "Scene in America," which in its peculiar way seems to me supremely great. You know how opposed your whole “third manner” of execution is to the literary ideals which animate my crude and Orson-like breast, mine being to say a thing in one sentence as straight and explicit as it can be made, and then to drop it forever; yours being to avoid naming it straight, but by dint of breathing and sighing all round and round it, to arouse in the reader who may have had a similar perception already (Heaven help him if he hasn’t!) the illusion of a solid object, made (like the “ghost” at the Polytechnic) wholly out of impa[l]pable materials, air, and the prismatic interferences of light, ingeniously focused by mirrors upon empty space. But you do it, that’s the queerness! And the complication of inuendo and associative reference on the enormous scale to which you give way to it, does so build out the matter for the reader that the result is to solidify by the mere bulk of the process, the like perception from which he has to start. As air, by dint of its volume, will weigh like a corporeal body; so his own poor little initial perception, swathed in this gigantic envelopment of suggestive atmosphere, grows like a germ into something vastly bigger and more substantial. But it’s the rummest method!—for one to employ systematically as you do now adays; and you employ it at your peril. In this crowded and hurried reading age, pages that require such close attention remain unread & neglected. You can’t skip a word if you are to get the effect, and 19 out of 20 worthy readers grow intolerant. The method seems perverse: “Say it out, for God’s sake,[”] they cry, “and have done with it.” And so I say now, Give us one thing in your older directer manner, just to show that, in spite of your paradoxical success in this unheard of method, you can still write according to accepted canons. Give us that interlude; and then continue like the “curiosity of literature” which you have become. For gleams and inuendoes and felicitous verbal insinuations you are unapproachable, but the core of literature is solid. Give it to us once again! The bare perfume of things will not support existence, and the effect of solidity you reach is but perfume & simulacrum.

Jean Frémon, out of The Botanical Garden (Green Integer, 2012), translated by Brian Evenson:

The penis of bimanous creatures descends freely; it hangs before the pubis in quadrumanes and chiroptera.
With carnivores, ruminants, pachyderms, solipedes and several other families of mammals, the penis is encased in a sheath which stretches along the belly and protects it from shrubs, insects. Buffon says that travelers saw the Patagonians seek an analogous result by tying the foreskin above the glans.*

Reticence, that figure which according to Fontanier consists of interrupting oneself and suddenly stopping in the course of a sentence, making understood by the little that one has said, and with the aid of circumstances, what one pretends to omit, and even a lot beyond.

Music is ephemeral, it passes away. And yet it doesn’t, it is easily memorized. Wingèd and sacred like the oracle. Our civilization has privileged the written, the serious, the logical, conclusive force, permanence, opposability, authenticity, only writing is attributed with them. Speech is subject to caution, asks to be corroborated, is not given credence. And yet the great masters of humanity have all taken pains not to write: Pythagoras, Socrates, Jesus, Buddha, all have preferred that supple, living, interpretable substance which is speech, It is like the reed as opposed to the oak, one bends it, one torments it, it stays itself, like clay.

To take up calculation again, to look at things, to measure phenomena, intervals, averages, to compare proportions, to find relations between things whose law of continuity, whose economy, escapes us, to look for similarities in dissimilar things, the song of birds, the chirring of grasshoppers and crickets, the croaking of frogs, the noises emitted underwater by fish, the flashes of fireflies, the cycle of lunar epacts.

The penis of two-handed (bimanous) creatures descends freely, it hangs before the pubis in quadrumanes, and in chiroptera (bats). The bat is strangely like man, and like primates in general: five fingers to the hand, one a thumb, five fingers on the foot, pectoral teats, mensual flux, free penis; it is a little caricature of man, abrupt and frightened in its evening flight about houses. Among flesh-eaters, ruminants, pachyderms, solipedes and several other families of mammals, the penis is sheathed in a scabbard which stretches along the belly; thus preserved against accidents and insect stings, while its sensibility is maintained intact. Voyagers, according to Buffon, have seen Patagonians trying to get like results by tying the foreskin above the gland, like a bag with a cord.

At the age of half past five, noted Ernest Hemingway’s mother, he could count to 100 and “spell by ear very well.” At forty-nine he still spelled by ear (“haveing,” “makeing,” “loving”) and would sum up a fortnight’s toil with English prose in a string of numbers appreciably larger than 100.