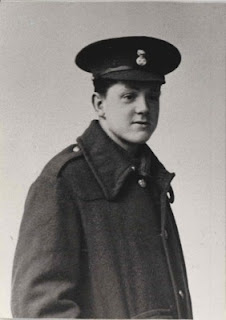 David Jones, out of the wholly stunning In Parenthesis (1937), of the heightening of the senses at the approach of a WWI artillery shell (“some mean chemist’s contrivance, a stinking physicist’s destroying toy”): “all minute noises, separate and distinct, in a stillness charged through with some approaching violence—registered not by the ear nor any single faculty—an on-rushing pervasion, saturating all existence; with exactitude, logarithmic, dial-timed, millesimal—of calculated velocity . . .” That entirely prickly sense of alertness, of sheer corporeal focus, deposited and arrayed in the precisely weighed syllabic deployment. And the moment of arrival, spell-breakage and the onslaught’s seemingly endless continuum (what the pile-up of gerunds signals: verbs, unable to complete their work, become nouns):

Out of the vortex, rifling the air it came—bright, brass-shod, Pandoran; with all-filling screaming the howling crescendo’s up-piling snapt. The universal world, breath held, one half second, a bludgeoned stillness. Then the pent violence released a consummation of all burstings out; all sudden up-rendings and rivings-through—all taking-out of vents—all barrier-breaking—all unmaking. Pernitric begetting—the dissolving and splitting of solid things.

And the “unearthing aftermath” witnessed by Jones’s “John Ball”: “Behind ‘E’ Battery, fifty yards down the road, a great many mangolds uprooted, pulped, congealed with chemical earth, spattered and made slippery the rigid boards leading to the emplacement. The sap of vegetables slobbered the spotless breech-block of No. 3 gun.” I think of Thomas Pynchon’s opening lines to Gravity’s Rainbow (1973)—“A screaming comes across the sky. It has happened before, but there is nothing to compare it to now . . .”—the suddenness and impact of the V-2 rocket’s trajectory, its inhuman scale, none of Jones’s minute particulars in the aftermath (“The Evacuation still proceeds, but it’s all theatre. There are no lights inside the cars. No lights anywhere. Above him lift girders old as an iron queen, and glass somewhere far above that would let the light of day through. But it’s night. He’s afraid of the way the glass will fall—soon—it will be a spectacle: the fall of a crystal palace. But coming down in total blackout, without one glint of light only great invisible crashing.”) Old story: technology cutting off the possibility of human-sized proceedings. (That “screaming” delivery now—it, too—defunct in the new—drone-menaced—century.) Shill progress, a decoy against human loss. Geoffrey G. O’Brien writes in a poem called “Hysteron Proteron”—out of Green and Gray (2007)—hysteron proteron meaning “later-earlier” (out of the Greek ὕστερον πρότερον) referring to the rhetorical gambit of inverting the temporal sequence of things (see the sequence of moves in O’Brien’s lines “The chosen design is finished and thought of, / approved slag from which choice lifts off / like a craving in space, latest thing / about which even the poorest can have an opinion, / can only have it the way one sees / a building become a set of buildings then / leap off into the sky together; / the way one sees no longer . . .”):

What is the meaning of a
pure series of interruptions?
A screaming comes across the sky;
the metaphors go up and the towers are built;
Paul Celan enters the life of the Seine;
saying butterfly crying being
born in Beth Israel; being made.
Todesfuge; after the first
death there is no other; I am going
to write it for you; cracks and reforms and bursts
in the violet air; the figure 5
in gold on a red fire truck
moving tense unheeded; Sunday
Morning’s first stanza; decorative
arts: The Dream of John Ball;
the fortuitous encounter on a dissecting table
of a sewing machine and an umbrella.
The sea whisper’d; I prefer not to;
Ozymandias and Darien;
Fourier reads Sade and begins
to believe that pleasure is a butterfly,
self-interest a flower in the garden;
they take their solitary way.
Flowers freaked with jet; Landscape with Fall
of Icarus and Children’s Games;
John Ball dies; John Ball writes
a letter to the countryside
and is born; Dante’s arrow hits
the target; the black stone is worshipped,
shattered, worshipped, polished, found.
“Before all that can be called ‘before’”
is written, copied, written, copied, found;
and that advice on the battlefield of spring,
in Mantua, when the bees return to the saffron flowers.
I hate and I love . . . I feel it happening and;
letters, suddenly allowed
separate realms of sound;
the unfinished tower,
like a craving in language, is thought to exist,
abandoned, worked on, begins to be built . . .

An extraordinary progression back into Babel, into “that which suffers commemoration”—with a sense of history itself being a kind of improvisatory rut, a making do with heedlessness and incorrigibility. Is it against that, and the current literary smeariness and deliquescence into inexact fandango and assembly, that I find Jones’s precisely cut details so heart-woundingly right? Or is it simply for the preternatural sagacity of Jones’s admitting “the unforeseen, subsidiary effects” of that woundwort “progress”: “We feel a rubicon has been passed between striking with a hand weapon as men used to do and loosing poison from the skies as we do ourselves. We doubt the decency of our own inventions, and are certainly in terror of their possibilities.” And for Jones’s attempts not to veer off the material soundings of the human voice:

I have been hampered by the convention of not using impious and impolite words, because the whole shape of our discourse was conditioned by the use of such words. The very repetition of them made them seem liturgical, certainly deprived them of malice, and occasionally, when skilfully disposed, and used according to established but flexible tradition, gave a kind of significance, and even at moments a dignity, to our speech. Sometimes their juxtaposition in a sentence, and when expressed under poignant circumstances, reached real poetry. Because of publication, it has been necessary to consider conventional susceptibilities. Some such expressions have nevertheless of necessity become part of the form this writing has taken. Quite obviously they do not constitute blasphemy in any theological sense, and that is all I would consider. Private X’s tirade of oaths means no more than ‘I do not like this Vale of Tears’; whereas Flossie’s ‘O, bother!’ would waste a countryside had she an efficacious formula. I say more: the ‘Bugger! Bugger!’ of a man detailed, had often about it the ‘Fiat! Fiat!’ of the Saints.