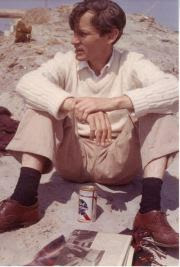 Usual indolent Friday, the honey-colored sunlight splashing down unheeding against the fence, the sooty-looking swifts skittering noisily along the sky’s “invysible and chaungeable” upswells of breeze, and me summoning up no pertinent syllables—copious, ransacked, or delinquent—with which finally to shut down the usual indolent week . . . What is the point of so endlessly arranging such glib and unimpeded re-arrangeables, words? (Williams, out of The Great American Novel: “Words cannot progress. There cannot be a novel. Break the words. Words are indivisible crystals. One cannot break them—Awu tsst grang splith gra pragh og bm— Yes, one can break them. One can make words. Progress? If I make a word I make myself into a word. Such is progress . . .”) Or there’s William Gaddis (A Frolic of His Own) quoting a line out of Larzer Ziff’s Literary Democracy (1981)—Ziff is talking about Melville’s tendency toward “pure wordplay” in The Confidence Man: “reality may not exist at all except in the words in which it presents itself.”

. . . the conviction that risk of ridicule, of attracting defamatory attentions from his colleagues and even raucous demonstrations by an outraged public have ever been and remain the foreseeable lot of the serious artist, recalling among the most egregious examples Ruskin accusing Whistler of throwing a paint pot in the public’s face, the initial scorn showered upon the Impressionists and, once they were digested, upon the Cubists, the derision greeting Bizet’s musical innovations credited with bringing about his death of a broken heart, the public riots occasioned by the first performance of Stravinsky’s Rite of Spring, and from the day Aristophanes labeled Euripides ‘a maker of ragamuffin mannequins’ the avalanche of disdain heaped upon writers: the press sending the author of Ode on a Grecian Urn ‘back to plasters, pills, and ointment boxes,’ finding Ibsen’s Ghosts ‘a loathsome sore unbandaged, a dirty act done publicly’ and Tolstoy’s Anna Karenina ‘sentimental rubbish,’ and in our own land the contempt accorded each succeeding work of Herman Melville, culminating in Moby Dick as ‘a huge dose of hyperbolical slang, maudlin sentimentalism and tragic-comic bubble and squeak,’* and since Melville’s time upon writers too numerous to mention. All this must most arguably in deed and intent affect the sales of their books and the reputations whereon rest their hopes of advances and future royalties, yet to the court’s knowledge none of this opprobrium however enviously and maliciously conceived and however stupid, careless, and ill informed in its publication has ever yet proved grounds for a successful action resulting in recovery from the marplot. In short, the artist is fair game and his cause is turmoil. To echo the words of Horace, Pictoribus atque poetis quidlibet audendisemper fuit aequa potestas, in this daring invention the artist comes among us not as the bearer of idées recues embracing art as decoration or of the comfort of churchly beliefs enshrined in greeting card sentiments but rather in the aesthetic equivalent of one who comes on earth ‘not to send peace, but a sword.’

* Out of a survey of Melville’s work up to the 1852 Pierre (“Speaking of the passengers on board Redburn’s ship Highlander, Mr. Melville significantly and curtly observes, ‘As for the ladies, I have nothing to say concerning them, for ladies are like creeds; if you cannot speak well of them, say nothing.’ He will pardon us for including in this somewhat arbitrary classification of forms of beauty and forms of faith, his own, last, and worst production, Pierre; or, the Ambiguities . . .”) signed “Sir Nathaniel” (pseudonym of Francis Jacox) in the July 1853 issue of the New Monthly Magazine (London, England):

For so successful a trader in “marine stores” as Mr. Melville, The Whale seemed a speculation every way big with promise. From such a master of his harpoon might have been expected a prodigious hit. There was about blubber and spermaceti something unctuously suggestive, with him for whaleman. And his three volumes entitled The Whale undoubtedly contain much vigorous description, much wild power, many striking details. But the effect is distressingly marred throughout by an extravagant treatment of the subject. The style is maniacal—mad as a March hare—mowing, gibbering, screaming, like an incurable Bedlamite, reckless of keeper or strait waistcoat. Now it vaults on stilts, and performs Bombastes Furioso with contortions of figure, and straining strides, and swashbuckler fustian, far beyond Pistol in that Ancient’s happiest mood. Now it is seized with spasms, acute and convulsive enough to excite bewilderment in all beholders. When he pleases, Mr. Melville can be so lucid, straightforward, hearty, and unaffected, and displays so unmistakable a shrewdness, and satirical sense of the ridiculous, that it is hard to suppose that he can have indited the rhodomontade to which we allude. Surely the man is a Doppelganger—a dual number incarnate (singular though he be, in and out of all conscience):—surely he is two single gentlemen rolled into one, but retaining their respective idiosyncrasies—the one sensible, sagacious, observant, graphic, and producing admirable matter—the other maundering, drivelling, subject to paroxysms, cramps, and total collapse, and penning exceeding many pages of unaccountable “bosh.” So that in tackling every new chapter, one is disposed to question it beforehand, “Under which king, Bezonian?”—the sane or the insane; the constitutional and legitimate, or the absolute and usurping? Writing of Leviathan, he exclaims, “Unconsciously my chirography expands into placard capitals. Give me a condor’s quill! Give me Vesuvius’ crater for an inkstand ! Friends, hold my arms!” Oh that his friends had obeyed that summons! They might have saved society from a huge dose of hyperbolical slang, maudlin sentimentalism, and tragi-comic bubble and squeak.

Oh the savagery of the American lyric paroxysmus! (“When thei bee in their traunce, or paroxismos, the smoke of it maketh theim to awake.”) “Sir Nathaniel” writes next: “His Yankeeisms are plentiful as blackberries. ‘I am tormented,’ quoth he, ‘with an everlasting itch for things remote.’” Me, too. Schism and click in the angelic parvenu light . . . “I make myself into a word.”