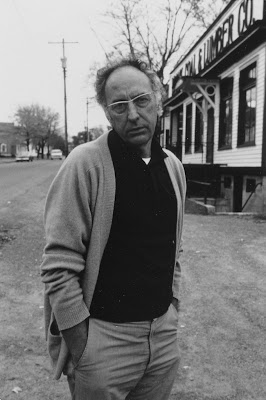 Morning’s lateral slant, its honeyed light drubbing a brick red wall “opposite.” End of a sloppily truncated week. The kind of incipience that bestirs means nothing in the hopper. The nothing dodge, dogged by the nothing, perspicacity hounding its own vacuity, nose scouring the scald intemperancy of the chance mutable ground. (What the fuck?) Thomas A. Clark: “to make a short song / out of nothing, a few words / to keep me going / to take nothing’s notation / is a mile’s occupation . . .” Note, though, how precipitously that nothing sucks particulars into it: “the thistle and gorse / the kiss, the blessing, the curse / are built on nothing / the cairn, the old fort, the hill / the tibia of the gull . . .” (The hollow bone of a bird: strut and truss of nothingness . . .)

It is possible that I try too hard, or rather that it is wrong to give the reader an impression of great and unsuccessful effort. It has to seem easy or better accomplished. And ‘strident’ yes. It may seem that, though my own stridor doesn’t offend me; only other people’s stridor. If the poetry is ‘hurt by that search for, insistence upon, what you call a world’ in your eyes (or ears)—it isn’t in mine—maybe I really consider the search—if that’s what it is—as more important than the poetry. Now we come to this music business. It is unnecessary to say that I am not against music, which I quite obviously revere. But poetry is poetry, not music . . . What I aim to do is to make a statement which has form which is composed of the contents of the statement. I am after ‘the weight, the texture, the strength,’ not of words, but of statements, something initially more static than you are, the shape of the rocks as they lie against each other not the sound they make as they tumble together. What was breath in your metaphor becomes rocks in mine to your great disadvantage but this is my letter and I’ll make the metaphors . . .

The question of whether a barrage of statements etc. is theoretically open for me also. But as you notice, that’s where I place my stakes. This is not because I can defend it as a thesis or intend to. It is only my style which is inevitable to me and not consciously mutable. It is not for me to decide. It is you the reader who has to do this, although conceivably I could become so fed up with it myself that I would just stop. I’m sure I am often dull and my statements do sound pompous—may even be intended as pomp. ‘Others’ must look out for themselves. I am the instrument of the world’s passion if I am anything at all. You also are such an instrument. But you’ll have to take care of that. My poetry does not exist in a world in which there are people who vote and make history. (If I misunderstand you, it is because I intend to.) There are many people in the world and if I assume that I speak for them by virtue of speaking only for myself it is because of the conjunction of two conditions:

1) we are encapsulated and remote from each other
2) we are interchangeable if not identical though we may appear different in different lights.

I think I might be perfectly willing to live in a world in which there were ‘others’ to whom it was possible to be related. But it is only in a barely perceptible way that I live in such a world. I have to give a faithful account of where I live so far as I am able. Not very far. But I can’t give an account of your world, or some other world which is not the one I see. If this sounds complacent to you, think of it as the complacency of a man whose parachute has failed to open but who is too complacent to start walking to safety in mid air . . .

The belaboring officious sun attends to a different wall, obliquely angled to that of its earlier ministrations. Cautery of brick. One comes to solace through the interminable featurette of one’s sententiousness, its varietal slurp. Sweet imperturbability in the dazzle of camouflage light. Either the world asserts itself in canny particulars, pig with apple in its mouth, or decamps with shreds and doodads trailing, dehiscing under what beleaguerment its lingual onslaught portends. The eccentric siege of language mucking up the sensorium, “green, my fluent mundo.” Piecemeal offertory with all the aptitude of the snubbed, ever and anon. To make of language itself a feasible daub refusal of pertinence or disclosure, the world caught in its wickets. Can the chimeric buzz.

Off for a couple of days.
Posted by John Latta at 6:39 AM