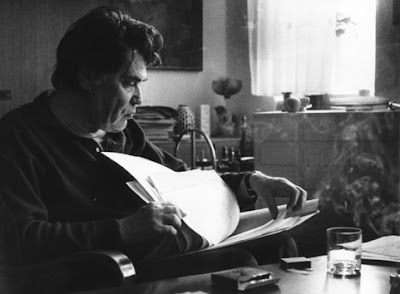 Out of Ernst Meister’s In Time’s Rift (Wave Books, 2012), Graham Foust and Samuel Frederick’s translation of the 1976 Im Zeitspalt, Meister’s “penultimate collection, and the midpoint of an informal trilogy constituting his ‘late work’,” an untitled piece*:

One of the trays
beset
by a sepal
from a poppy;

by the breath
of a languishing child,
the other.

By such
bewildered pointers
plagued—
our being.

How that “beset” makes of that minuscule poppy’s sepal both jewel and threat; how that counterweight of child’s breath—languishing, uncertain of its push, and pushing—manages to keep the pans balanced, even. Bewildered and plagued. Seemingly a fierce constancy in Meister, that inconstancy, that vacillatory static, urge and restraint, plunge and retreat. Forces large and small endlessly poised in equilibratory “countersense.” See**:

“In the deepest reaches
of the oldest dove’s wing”
countersense
conceals itself,
going at the blow.
Where the oldest squab is,
negation sits in the nest,
grief-eyed beyond measure.

Concealment “going at the blow,” and measurelessness buried in the reaches. In the excellent Introduction to In Time’s Rift Foust and Frederick point to Heidegger’s formula “Das Nichts selbst nichtet”—“nothingness itself nothings,” so copious and inciting is its force. Meister: “Nothingness wants / to conceal itself / in what is dead. / In this it is / quite real.” (“Es will sich / im Toten / das Nichts verschweigen. / So ist es / ganz wirklich.”) Of Meister (1911-1979) who, following the 1932 publication of his first book Ausstellung (Exhibition) renounced publication for twenty-some years—his second book, Unterm schwarzen Schafspelz (Under Black Sheep’s Clothing) only appeared in 1953—the translators note:

Like the American poet George Oppen (1908–1984)—who also fought in the Second World War . . . and who stopped publishing poetry for a prolonged period before, during, and after it—Meister takes much stock in “the little words,” words that often prove crucial to his efforts to, as Oppen says, “lay down the substantive for its own sake.”

They quote the lovely Meister couplet “I look at a window, / square of sky” pertinently to note how Meister’s seeing—that at in lieu of the commoner, unseeing (merely “making use of that aperture”) out—measures the world dumbly, that is to say, unabashedly, in momentary innocent concert with the sheer mechanics of the senses. The final poem*** in the book:

Did you, sun, thieve
eyes from me,
or I from you,
in that moment’s glance
when the universe no longer
concerns me, extinguished?

* None of the poems in In Time’s Rift carry titles. The original reads:

Sentences out of Thomas A. Clark’s “In Praise of Walking”:

Early one morning, any morning, we can set out, with the least possible baggage, and discover the world.

It is quite possible to refuse all the coercion, violence, property, triviality, to simply walk away.

Convictions, directions, opinions, are of less importance than sensible shoes.

In the course of a walk, we usually find out something about our companion, and this is true even when we travel alone.

When I spend a day talking I feel exhausted, when I spend it walking I am pleasantly tired.

The pace of the walk will determine the number and variety of things to be encountered, from the broad outlines of a mountain range to a tit’s next among the lichen, and the quality of attention that will be brought to bear upon them.

A rock outcrop, a hedge, a fallen tree, anything that turns us out of our way, is an excellent thing on a walk.

Wrong turnings, doubling back, pauses and digressions, all contribute to the dislocation of a persistent self-interest.

We lose the flavour of walking if it becomes too rare or too extraordinary, if it turns into an expedition; rather it should be quite ordinary, unexceptional, just what we do.

Daily walking, in all weathers, in every season, becomes a sort of ground or continuum upon which the least emphatic occurrences are registered clearly.

Of the many ways through a landscape, we can choose, on each occasion, only one, and the project of a walk will be to remain responsive, adequate, to the consequences of the choice we have made, to confirm the chosen way rather than refuse the others.

A dull walk is not without value.

To walk for hours on a clear night is the largest experience we can have.

How tempting it is to attempt to apply the sentences to writing, and how wrong. (See, though, A. R. Ammons’s “A Poem Is a Walk” (1967): “There is no ideal walk, then, though I haven’t taken the time to prove it out completely, except the useless, meaningless walk. Only uselessness is empty enough for the presence of so many uses, and only through uselessness can the ideal walk come into the sum total of its uses. Only uselessness can allow the walk to be totally itself.”)

Out of the Ian Brinton-edited Andrew Crozier Reader (Carcanet, 2012), Carl Rakosi’s story (told to L. S. Dembo, 4 April 1968) of being tracked down by Crozier (and subsequently returning to writing poetry after a period of some two-and-a-half decades):

. . . I got a letter one day that had gone the rounds of a number of different cities, before it finally reached me, from a young Englishman named Andrew Crozier. He said that he had run across my name in an article by Rexroth, had looked up my work in magazines, and copied every single poem I had written. He had made a bibliography and wanted to know whether I had written any more. Well, the thought that somebody his age could care that much for my work really touched me; after all, there were two generations between us. And that’s what started me.
There’s an amusing bit to that letter. You know my legal name is Callman Rawley, not Carl Rakosi, and Crozier had a great deal of trouble tracking me down. Fortunately he was not discouraged by a letter from my publisher saying that he doubted if I was alive and that he had heard that I may have been a secret agent for the Comintern and died behind the Iron Curtain. However, this was only a rumor and Crozier must not breathe a word of this to anyone! I can guess where this rumor might have come from. My publisher must have gotten to someone who knew my old friend, Kenneth Fearing. Fearing and I had been roommates at the University. This is just the kind of prank he would play. I can hear him laughing like hell over it.

June 7, 1965
Dear Mr. Crozier:
What an unexpected pleasure to know that you like my work enough to go to all that trouble. Impertinence indeed!
I can answer one of your questions without any difficulty: I stopped publishing because I stopped writing (I’m glad you didn’t ask why I stopped writing). The other question I can only take a stab at. I chopped up my poems because I had a passion for order and clarity, and it didn’t seem to me I could achieve that except in small pieces. I was a fool and regretted the butchery later.
If you are ever in these parts, look me up. And forgive me for taking so long to answer.
Cordially,
Callman Rawley
P.S. I’m curious to know what reference Rexroth made to me. I didn’t see it.