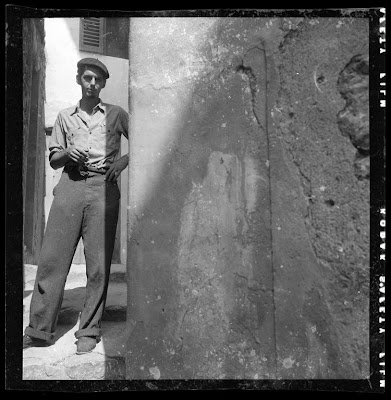 Dallying into an off-stretch, no preparatory slate, no wee sleekit cow’rin’ tim’rous beastie of an “idea” tucked in the weskit or pantywaist retrievable, how can anything commence thus? Just gassing about, with a cylinder stuck upright. Creeley, in a 1971 interview with Michael Andre, recalling “the only definition of form” that “stuck” being Blake’s “Fire delights in its form.” Out of Blake’s “The French Revolution”:

. . . for fire delights in its form.
But go, merciless man! enter into the infinite labyrinth of another’s brain
Ere thou measure the circle that he shall run. Go, thou cold recluse, into the fires
Of another’s high flaming rich bosom, and return unconsum’d, and write laws.
If thou canst not do this, doubt thy theories, learn to consider all men as thy equals,
Thy brethren, and not as thy foot or thy hand . . .

“Fire delights in its form”: sense of fire’s way of feeding itself with itself, the conflagratory gusto of any continuum. The processual march: “Here here / here. Here.” Pertinent: Morton Feldman (out of “After Modernism”) talking about the hors modernist Cézanne: “With Cézanne it is always how he sees that determines how he thinks, whereas the modernist, on the other hand, has changed to perception by way of the conceptual. In other words, how one thinks has become the sensation.” And:

With modernity the painter no longer had to make that perilous transition from one world to another called “passage.” He had only to “relate” each area, and each idea. Yet it was in this transition, in this journey, that the artist learned a swiftness, a surety, a Nijinsky-like utterance of his limbs, an incredible utilization of sight, that we associate now only with the art of the past. This total involvement, this total coordination of the senses, this complete sensual experience has only very recently been captured again in Abstract Expressionism. Here, in reaction to modernity, there is an insistence that one can no longer take refuge in ideas, that thought is one thing and its realization another, the real humility does not lie in all this superrationality, but again, in trying to paint like a god.

The “complete sensual experience” of “trying to paint like a god” surely akin to Blake’s fire, and to the cautionary “doubt thy theories” of any who’d presume to “write laws.” (See, too, O’Hara’s “nerve.”) The phenomenal smear caught by the common doing, the routine god-toil. (Creeley, in Pieces: “No forms less / than activity.” Presumably reiterant of the fire.) Creeley (talking to Andre): “Words are common. If you go swimming, you don’t say: this is my drop of water and that’s your drop of water. Obviously you’re swimming in a common ocean.” Too, Creeley talks of Tom Clark’s “A Sailor’s Life,” calling it “the most accurate criticism of Pieces”:

That’s criticism in Pound’s sense of the use of the occasion that the initial poem springs from. And I have been very interested to see that that book’s criticism has really consisted of people who know how to use the formal modes got to there. Not people who thought they understood what it meant. But the people who could demonstrate by their use of it that they were with its contents.

Whatever interest
there was in
difference’s gone.

She rolls the sounds
around and around.

A piece of speech
falls out of her mouth.

“A peace
of speech,”

Like the Big Note
of which all music
is the resonance
is the poetic sentence.

You’re a piece
of the same person
I’m a piece of.

Who is Lewis?
Who is Joanne?

Reverie of prolonged resonance without disjunct, seamlessness of speech, and of the world, spelled out by bits. No wonder one comes to write nigh continuously. (Cézanne, according to Feldman: “so attuned to the process that he actually mistook it for life.” Precisely what it indubitably is, ask any writer.) One apt and lovely piece of Creeley’s Clark is seemingly replying to—“Diction”:

The grand time when the words
were fit for human allegation,

and imagination of small, local
containments, and the lids fit.

What was the wind blew through it,
a veritable bonfire like they say—

and did say in hostile, little voices:
“It’s changed, it’s not the same!”

With its echo of Bishop Sprat’s full-throttle longing for a kind of purity (Creeley’s “fit,” or what Clark calls “difference”) bewrayed in his praise for the Royal Society’s leanings against “smeary” stylistic excess: “They have therefore been most rigorous in putting in execution, the only Remedy, that can be found for this Extravagance, and that has been, a constant Resolution, to reject all the amplifications, digressions, and swellings of style; to return back to the primitive purity, and shortness, when men deliver’d so many things, almost in an equal number of words.” Leanings tucked sternly into “our” pantywaists even today . . .

Off up north for a week or so. Correspondences to resume after a period of determined complacency.