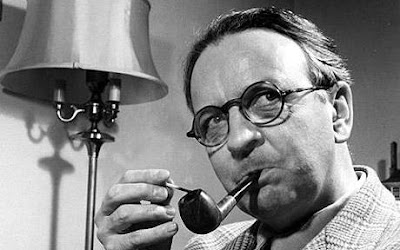 Somewhere in a notebook list of similes, Raymond Chandler writes of “a nose like a straphanger’s elbow.” Is it how that elbow is about at nose level, the hangdog commuter haggardly pitched behind it—is that what makes the line so perfect? Or is it the blank flesh-stupidity of the elbow itself made nose material, and suddenly requiring a personality inimical to it? Is it Roland Topor who used to assemble physiognomies out of magazine-clipped body parts? Café Panique. Others: “a mouth like wilted lettuce”; “cute as a washtub”; “a face like a collapsed lung”; “smart as a hole through nothing.”

Some “Chandlerisms” (out of a Frank MacShane-edited book of Chandler’s notebook entries, points of casual self-mimickry):

She threw her arms around my neck, and nicked my ear with the gunsight.

Take your ears out of the way and I’ll leave.

I left her with her virtue intact, but it was quite a struggle. She nearly won.

The only difference between you and a monkey is you wear a larger hat.

She made a couple of drinks in a couple of glasses you could almost have stood umbrellas in.

Above the sky-blue gabardine slacks he wore a two-tone leisure jacket which would have been revolting on a zebra.

He wanted to buy some sweetness and light and not the kind that comes through the east window of a church.

She sat in front of her princess dresser trying to paint the suitcases out from under her eyes.

I had been stalking the bluebottle fly for five minutes, waiting for him to sit down. He didn’t want to sit down. He just wanted to do wing-overs and sing the prologue to Pagliacci.

The boys who talk and spit without ever bothering the cigarettes that live in their faces.

(The lines about the bluebottle fly show up in Chandler’s 1949 novel The Little Sister. Small difference there be between self-mockery and public utility.)

Chandler originally titled Farewell, My Lovely (1940) The Second Murderer, out of Shakespeare’s Richard III. Out of the notebooks:

The Second Murderer quashed by Knopf, Chandler next proposed Zounds, He Dies. It, quashed, too.

Out of a list of titles found in Chandler’s notebooks: “The Man with the Shredded Ear,” “The Man Who Loved the Rain,” “We All Liked Al,” “Too Late for Smiling,” “The Diary of a Loud Check Suit,” “The Lady with the Truck.” MacShane’s note:

Chandler’s interest in titles even led him to invent a writer, Aaron Klopstein, whom he described as a suicide in Greenwich Village at the age of thirty-three. Klopstein published two novels entitled Once More the Cicatrice and The Seagull Has No Friends; two volumes of poetry, The Hydraulic Facelift and Cat Hairs in the Custard; a collection of short stories called Twenty Inches of Monkey—a title derived from an animal dealer’s catalogue in which monkeys were advertised for vivisection at one dollar an inch; and a book of critical essays entitled Shakespeare in Baby Talk. Klopstein shot himself with an Amazonian blow gun.

Chandler’s Shakespeare (out of the MacShane-edited Selected Letters). In a 28 September 1950 letter to Hamish Hamilton:

I know that mystery writers are regarded as hacks in certain quarters simply because they are mystery writers. This is a confusion of thought, to my mind. A writer who accepts a certain formula and works within it is no more a hack than Shakespeare was because to hold his audience he had to include a certain amount of violence and a certain amount of low comedy, no more a hack than the Renaissance painters were because they had to exploit the religious motives which were pleasing to the church. My definition of a hack is a man who lets someone else tell him how and what to write, who writes, if he is a writer, not to an accepted formula, but to some editor’s definition of it. But the frontier is always vague.

Most of us become impatient with the messiness that is around us and are inclined to attribute to the past a purity of line which was not apparent to the contemporaries of that past. . . . For myself, I am convinced that if there is any virtue in our art, and there may be none at all, it does not lie in its resemblance to something that is now traditional, but which was not traditional when it was first produced. If we have stylists, they are not people like Osbert Sitwell—Edwardians who stayed up too late; nor are they pseudo-poetic dramatists like T. S. Eliot and Christopher Fry; nor bloodless intellectuals who sit just at the edge of the lamplight and dissect everything to nothing in dry little voices that convey little more than the accents of boredom and extreme disillusion. It seems to me that there have been damn few periods in the history of civilization that a man living in one of them could have realized as definitely great. If you had been a contemporary of Sophocles, I think you might have thought of him almost as highly as you do now. But I think you might have thought Euripides a little vulgar. And if you had been an Elizabethan, I am quite sure you would have thought Shakespeare largely a purveyor of stale plots and overelaborate rhetoric . . .

There is something about the literary life that repels me; all this desperate building of castles on cobwebs, the long-drawn acrimonious struggle to make something important which we all know will be gone forever in a few years, the miasma of failure which is to me almost as offensive as the cheap gaudiness of popular success. I believe the really good people would be reasonably successful in any circumstances; that to be very poor and very beautiful is probably a moral failure much more than an artistic success. Shakespeare would have done well in any generation because he would have refused to die in a corner; he would have taken the false gods and made them over; he would have taken the current formulae and forced them into something lesser men thought them incapable of. Alive today he would undoubtedly have written and directed motion pictures, plays and God knows what. Instead of saying “This medium is not good,” he wouldn’t have cared a rap, because he would know that without some vulgarity there is no complete man. He would have hated refinement, as such, because it is always a withdrawal, a shrinking, and he was much too tough to shrink from anything.

And (out of a 1 July 1937 letter to the editor of The Fortnightly Intruder):

The best writing in English today is done by Americans, but not in any purist tradition. They have roughed the language around as Shakespeare did and done it the violence of melodrama and the press box. They have knocked over tombs and sneered at the dead. Which is as it should be. There are too many dead men and there is too much talked about them.

Writing to Blanche Knopf (22 October 1942) about the sleek meretriciousness of marketing (and of some of those who knavishly cotton to its precepts), Chandler complains about having “to ride around on Hammett and James Cain, like an organ grinder’s monkey”:

Hammett is all right. I give him everything. There were a lot of things he could not do, but what he did he did superbly, But James Cain—faugh! Everything he touches smells like a billygoat. He is every kind of writer I detest, a faux naïf, a Proust in greasy overalls, a dirty little boy with a piece of chalk and a board fence and nobody looking. Such people are the offal of literature, not because they write about dirty things, but because they do it in a dirty way. Nothing hard and clean and cold and ventilated. A brothel with a smell of cheap scent in the front parlor and a bucket of slops at the back door.

Rather like some members of the latest crop of archly dumbed-down neo-confessionalists . . .
Posted by John Latta at 7:06 AM