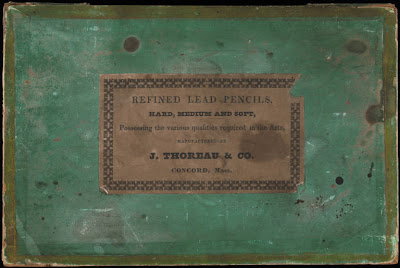 Pencil Box, J. Thoreau & Co.
(Beinecke Rare Book and Manuscript Library)
Emerson (“Eulogy, 1862”): “From a box containing a bushel or more of loose pencils, he could take up with his hands fast enough just a dozen pencils at every grasp.”

Cold morning. Up, dilatory, rebelling, at four (to light up the lamp at five). Odd sleeps. Perused William Ellery Channing’s Thoreau: The Poet-Naturalist, the 1902 F. B. Sanborn-edited version of the 1873 original. One gathers something of the “somewhat mercurial Channing” (Krutch) through the rampant quotational jitters of the “Preface.” In part:

In a biographic thesis there can hardly occur very much to amuse, if of one who was reflective and not passionate, and who might have entered like Anthony Wood in his journal, “This day old Joan began to make my bed,”—an entry not fine enough for Walpole. At the same time the account of a writer’s stock in trade may be set off like the catalogues of George Robins, auctioneer, with illustrations even in Latin or, as Marlowe says—

“The learned Greek, rich in fit epithets,
Blest in the lovely marriage of pure words.”

Byron’s bath at Newstead Abbey is described as a dark and cellar-like hole. The halos about the brows of authors tarnish with time. Iteration, too, must be respected,—that law of Nature. Authors carry their robes of state not on their backs, but, like the Indians seen by Wafer, in a basket behind them,—“the times’ epitome.” But as the cheerful host says:—

“I give thee all, I can no more,
If poor the offering be,”

the best scraps in the larder, like Pip’s pork-pie.
. . .
Claude Lorraine used to say, “I sell you my landscapes: the figures I give away.” So there are patch-work quilts made by the saints where bits of fine silk are sewed on pieces of waste paper,—that seems, madam, not that is. But recall the trope that “very near to admiration is the wish to admire” and permit the excellence of the subject to defray in a measure the meanness of the treatment . . .

Whew. Sanborn, regarding Channing’s re-drafting of an earlier (1863) manuscript, notes Channing’s “perversity of genius” in the redoing. And unsigned review in the New York Times dated 25 October 1873 reads in part:

The preface is an epitome of the book, which is written without order or method, and in a style oftentimes so obtrusively bad as to suggest the suspicion that Mr. Channing has purposely adopted it, the better to set off the simplicity and clearness of the extracts he gives from Thoreau. Of the latter he tells us that “for so learned a man he spared his erudition,” and that “there are so few obscurities in Thoreau’s writing, that his style has that ease and moderateness he appears to lack.” The exact reverse is true of his chronicler, amid whose clumsy inversions, deplorable Latinisms, and uncouth efforts at humor, Thoreau’s clear and clean-cut sentences shine like diamonds in a dust heap. Mr. Channing talks of “isolate houses,” or “at-length-deserted pathways,” and the “breathing aloofness”; a hen is the “origin of feathers,” ice is “shaggy enamel.” . . . What can be expected of a man who talks of “tadpoles beginning, like magazine writers, to drop their tails” . . .

When looking over dry and dusty volumes of the English poets, I cannot believe that those fresh and fair creations I had imagined are contained in them. English poetry from Gower down, collected into one alcove, and so from the library window compared with the commonest nature, seems very mean. Poetry cannot breathe in the scholar’s atmosphere. . . . I can hardly be serious with myself when I remember that I have come to Cambridge after poetry; and while I am running over the catalogue and selecting, I think it would be a shorter way to a complete volume to step at once into the field or wood, with a very low reverence to students and librarians. Milton did not see what company he was to fall into.

(Journal, 30 November 1841, quoted by Krutch.) Continuing: “On running over the titles of these books, looking from time to time at their first pages or farther, I am oppressed by an inevitable sadness.”

Alors, some few reading notes out of the Channing biography: