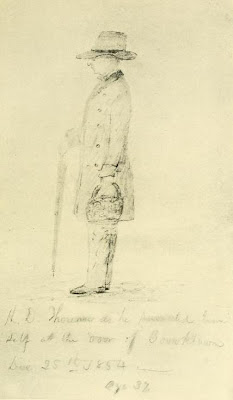 Odd blatting thundershowers of short durance in the night, the dog nervously prowling. Warmish by morning. Pondering, aimlessly, what connects, and to what end. Wallace Stevens, writing of Marianne Moore, saying: “An aesthetic integration is a reality.” And: “To confront fact in its total blankness is for any poet a completely baffling experience. Reality is not the thing but the aspect of the thing.” (Sidling back, again, to Thoreau’s sense of poetry’s being “not recoverable thought, but a hue caught from a vaster receding thought.” A glancing blow, a ricochet, “some bearded meteor, trailing light.”) Stevens: “No fact is a bare fact, no individual fact is a universe in itself.” And: “An isolated fact cut loose from the universe, has no significance for the poet.” So Thoreau, out making connections in the inconstant welter, constantly “reminded of”—and serially: “reminded of coral, of leopard’s paws or birds’ feet, of brains or lungs or bowels, and excrements of all kinds”—writes in the Journal (September 5, 1851): “All perception of truth is the detection of an analogy.” In its context (initially “reminding of” John Keats’s flighty reply to Reynolds dated February 3, 1818: “Would we were a sort of ethereal Pigs, and turned loose to feed upon spiritual Mast and Acorns—which would be merely being a squirrel and feeding upon filberts, for what is a squirrel but an airy pig, or a filbert but a sort of archangelical acorn? About the nuts being worth cracking, all I can say is, that where there are a throng of delightful Images ready drawn, simplicity is the only thing”—it’s possible Thoreau read the letter in the Richard Monckton Milnes-edited 1848 Life, Letters, and Literary Remains, of John Keats):

No doubt, like plants, we are fed through the atmosphere & the varying atmospheres of various seasons of the year feed us variously. How often we are sensible of being thus fed & invigorated! And all nature contributes to this aerial diet its food of finest quality. Methinks that in the fragrance of the fruits I get a finer flavor and in beauty (which is appreciated by sight—the taste & smell of the eye—) a finer still. As Wilkinson says “The physical man himself is the builded aroma of the world. This, then, at least, is the office of the lungs—to drink the atmosphere with the planet dissolved in it.” —— “what is the import of change of air, and how each pair of lungs has a native air under some one dome of the sky.”
Wilkinson’s book to some extent realizes what I have dreamed of a reeturn to the primitive analogical & derivative senses of words— His ability to trace analogies often leads him to a truer word than more remarkable writers have found.— As when in his chapter on the human skin, he describes the papillary cutis as “an encampment of small conical tents coextensive with the surface of the body”— The faith he puts in old & current expressions as having sprung from an instinct wiser than science—& safely to be trusted if they can be interpreted.
The man of science discovers no world for the mind of man with all its faculties to inhabit— Wilkinson finds a home for the imagination—& it is no longer out cast & homeless. All perception of truth is the detection of an analogy.— we reason from our hands to our head.

Improve the opportunity to draw analogies. There are innumerable avenues to a perception of the truth. Improve the suggestion of each object however humble—however slight & transient the provocation—what else is there to be improved? Who knows what opportunities he may neglect. It is not in vain that the mind turns aside this way or that. Follow its leading—apply it whither it inclines to go. Probe the universe in a myriad points. Be avaricious of these impulses. You must try a thousand themes before you find the right one—as nature makes a thousand acorns to get one oak. He is a wise man & experienced who has taken many views— To whom stones & plants & animals and a myriad objects have each suggested something—contributed something.

Semblances pulled down out of the myriad. Somehow I think of William Carlos Williams’s notes (In the American Grain) concerning Benjamin Franklin’s “voluptuousness of omnivorous energy brought to a dead stop by the rock of New World inopportunity”: “His energy never attained to a penetrant gist; rather it was stopped by and splashed upon the barrier, like a melon.” Williams’s Franklin one of the many “pure products of America”—made “crazy” by the sheer surrounding “mass of impedimenta”: “His ‘good’ was scattered about him. This is what is called being ‘practical.’” Contra Thoreau’s implacable impracticality, all gist and saunter, the eye’s untoilsome traveling. Williams: “It is only in isolate flecks that / something / is given off . . .” Thoreau (Journal, July 16, 1858): “I suspect that such are the laws of light that our eye, as it were, leaps from one prominence to another, connecting them by a straight line when at a distance and making one side balance the other.”