A blustery Saturday, a lazy Sunday. I read—looking for something or other, unfound—“A few frayed nerves count for nothing is this swift world.” Guy Davenport writing to Jonathan Williams, 26 May 1966, in A Garden Carried in a Pocket, Guy Davenport / Jonathan Williams Letters 1964-1968, edited by Thomas Meyer (Green Shade, 2004). He’s assuaging Williams’s battered heart (who’s momentarily “on the outs” with Ronald Johnson):

You have entered into a Utopian idealistic millennial transcendental attempt to live like the blessèd angels—hoi makairioissi angkelloi, if the tongue of Iamblichos and Diodorus Sikulos will add a little honey to the Saxon vocables here—and until the Great Beast comes, with its rivers of light and forms perfected in the splendor of God’s Hand itself, you are going to squabble and bypass total happiness, in short, suffer, as do we all, from the mortal wound Adam left us for inheritance.
The selfhood, said Master Blake, izza whore.

(I think of Krazy Kat hiding behind an enormous newspaper whilst Offissa Pupp marches Ignatz Mouse off to the slammer for attempting—again—to hit K. K. with a brick, and he, K. K., rather self-referentially reading: “Ooy, he’s saying something at you—ooy, it sims to be something in werra roughish, and werra uncootish lengwidge.”) Weekend bunged up by quotables, readables supped for some inchoate conglomerate nurture. Talking of Ronald Johnson (“I complained that Ronald Johnson was the vaguest human being I’d even met.”), Davenport once wrote (in Angle 5 “The Ronald Johnson Issue”): “The only mention of his sexuality was his telling me that as a boy in Kansas he had so loved his gym teacher that he broke into his house, stole his pyjamas from under his pillow, and ate them.” See, too, Emerson’s “Quotation and Originality”: “Whoever looks at the insect world, at flies, aphides, gnats, and innumerable parasites, and even at the infant mammals, must have remarked the extreme content they take in suction, which constitutes the main business of their life. If we go into a library or news-room, we see the same function on a higher plane, performed with like ardor, with equal impatience of interruption, indicating the sweetness of the act . . .” The “selfhood” may well be a whore, but according to Emerson such “mischief is quickly punished”:

Admirable mimics have nothing of their own. In every kind of parasite, when Nature has finished an aphis, a teredo, or a vampire bat,—an excellent sucking-pipe to tap another animal, or a mistletoe or dodder among plants,—the self-supplying organs wither and dwindle, as being superfluous. In common prudence there is an early limit to this leaning on an original.

To the lament that Ark isn’t autobiographical (that is, not sheepishly trendy), I can hear Ron saying, “Well, it’s my eye that saw it all, my reading and looking that found it.” The ringing paradox of art is that the artist disappears when the work of art is successful. The girl in the field, singing in Gaelic as she binds sheaves, is there, before us, the magician Wordsworth nowhere about. It is a sparrow, not Ronald Johnson, watching the sun rise at the beginning of Ark.

“Werra uncootish,” the playing to the crowd, the propensity to niggle the crowd’s negotiables, and return them to it (see “flarf”). Davenport again: “I once remarked to Ron that many sections of Ark read just as well backward as forward. This pleased him immensely. He then wrote a section that has to be read backward. He was ecstatic when I told him about Ernst Mach’s dream of a candle burning inside a beaker of water.” (Ernst Mach: “I saw in my laboratory a beaker filled with water, in which a candle was serenely burning. ‘Where does it get its oxygen from?’ I thought. ‘It is absorbed in the water,’ was the answer. ‘Where do the gases produced in the combustion go to?’ The bubbles from the flame mounted upwards in the water, and I was satisfied . . .” Sexual exchange comme continuum.)

I spent an unfructifying period looking into Ark in search of Davenport’s “section that has to be read backward” and concluded that he’d constructed a perfectly unverifiable vignette (rather like saying a “vignette” originally referred to “something that may be written on a vine-leaf”), the piece is hid amongst its models. Davenport in “A Field of Snow on a Slope of the Rosenberg” (beginning, in wily and imitant Walsersprache, “For a man who had seen a candle serenely burning inside a beaker filled with water, a fine spawn of bubbles streaming upward from its flame, who had been present in Zürich when Lenin with closed eyes and his thumbs hooked in the armholes of his waistcoat listened to the baritone Gusev singing on his knees Dargomyzhsky’s In Church We Were Not Wed, who had conversed one melancholy afternoon witt Manet’s Olympia speaking from a cheap print I’d thumbtacked to the wall between a depraved adolescent girl by Egon Schiele and an oval mezzotint of Novalis, and who, as I had, Robert Walser of Biel in the canton of Bern, seen Professor William James talk so long with his necktie in his soup that it functioned as a wick to soak his collar red and caused a woman at the next table to press her knuckles into her cheeks and scream, a voyage in a hot-air balloon at the mercy of the winds from the lignite-rich hills of Saxony Anhalt to the desolate sands of the Baltic could precipitate no new shiver from my paraphenomenal and kithless epistemology except the vastation of brooding on the sweep of inconcinnity displayed below me like a map and perhaps acrophobia . . .”) writes, too, of Mach thus:

It says in the pages of Mach that the mind is nothing but a continuity of consciousness. It is not itself a thing. It is its contents, like an eye and what it sees, a hand and what it holds. Mach’s continuity, like Heraklit’s river, defines itself by its flow.
. . .
—It is so obvious, I persisted, once you have seen it. The mind is what it knows. It is nothing else at all, at all.

Izza, that is, whore. 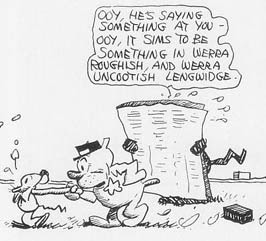