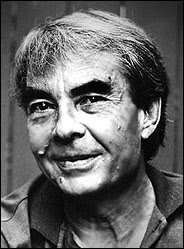 Rain, cold, the chuck-chuck of its drippings off the eaves, the tympanic wash of its suddenly stunned innumerable mutterings if a gust ups to throw a sheaf of it against the window. All night rain, skittering off toward morning. Rain permeating the yellow slicker in its bicyclist’s dash through the gleaming streets . . . (Thoreau called A Week on the Concord and Merrimack Rivers an “unroofed book”: “I trust it does not smell of the study & library—even of the Poets attic, as of the fields & woods.— that it is a hypaethral or unroofed book—lying open under the ether—& permeated by it. Open to all weathers—not easy to be kept on a shelf.” Nailing down hypaethral: “an epithet applied to those Egyptian temples which are open to the heavens above—under the ether—” How little the “unroofed”—the scuffle through the downed leaves of the woodlot, the scissory snip and flit of the ckickadees—importunes one of late . . .) Charles Ives, under “Thoreau,” out of Essays Before a Sonata, written to accompany “The Concord Sonata”:

It was the soul of Nature, not natural history that Thoreau was after. A naturalist’s mind is one predominantly scientific, more interested in the relation of a flower to other flowers than its relation to any philosophy or anyone’s philosophy. A transcendent love of Nature and writing “Rhus glabra” after sumach doesn’t necessarily make a naturalist. It would seem that, although thorough in observation (not very thorough according to Mr. Burroughs) and with a keen perception of the specific, a naturalist—inherently—was exactly what Thoreau was not. He seems rather to let Nature put him under her microscope than to hold her under his. He was too fond of Nature to practice vivisection upon her. He would have found that painful, “for was he not a part with her?”* But he had this trait of a naturalist, which is usually foreign to poets, even great ones: he observed acutely even things that did not particularly interest him . . .

“According to Mr. Burroughs” (John Burroughs, out of Indoor Studies) Thoreau:

. . . hesitated to call himself a naturalist; probably even poet-naturalist would not have suited him. He says in his journal: “The truth is, I am a mystic, a transcendentalist, and a natural philosopher to boot,” and the least of these is the natural philosopher. He says: “Man cannot afford to be a naturalist, to look at Nature directly, but only with the side of his eye. He must look through and beyond her. To look at her is as fatal as to look at the head of Medusa. It turns the man of science to stone.” It is not looking at Nature that turns the man of science to stone, but looking at his dried and labeled specimens, and his dried and labeled theories of her. Thoreau always sought to look through and beyond her, and he missed seeing much there was in her; the jealous goddess had her revenge. I do not make this remark as a criticism, but to account for his failure to make any new or valuable contribution to natural history. He did not love Nature for her own sake, or the bird and the flower for their own sakes, or with an unmixed and disinterested love . . .

Too, Burroughs here quotes Thoreau’s Journal line about a thing’s “fine effluence”: “The ultimate expression or fruit of any created thing is a fine effluence, which only the most ingenuous worshiper perceives at a reverent distance from its surface even.” Again that slant-approachable percept, akin to the poem as “not recoverable thought, but a hue caught from a vaster receding thought.” (In “The Concord Sonata” Guy Davenport quotes another pertinent line out of A Week: “Give me a sentence which no intelligence can understand.” It continues: “There must be a kind of life and palpitation to it, and under its words a kind of blood must circulate forever . . .”) Davenport is pursuing therein (and claiming to find) the origin and meaning of Thoreau’s mysterious lines (out of Walden, or Life in the Woods) “which no intellect can understand”:

I long ago lost a hound, a bay horse, and a turtledove, and am still on their trail. Many are the travellers I have spoken concerning them, describing their tracks and what calls they answered to. I have met one or two who had heard the hound, and the tramp of the horse, and even seen the dove disappear behind a cloud, and they seemed as anxious to recover them as if they had lost them themselves.

He quotes Burroughs: “This fine effluence he was always reaching after, and often grasping or inhaling. This is the mythical hound and horse and turtledove which he says in Walden he long ago lost, and has been on their trail ever since. He never abandons the search, and in every woodchuck hole or muskrat den, in retreat of bird, or squirrel, or mouse, or fox that he pries into, in every walk and expedition to the fields or swamps or to distant woods, in every spring note and call that he listens to so patiently, he hopes to get some clew to his lost treasures, to the effluence that so provokingly eludes him.” Davenport provided a succinct (and possibly leg-pulling?) summary of the makings of “The Concord Sonata” in an interview conducted by B. Renner. Davenport:

“The Concord Sonata” is a suite for piano by Charles Ives. Its technical name is “Second Pianoforte Sonata: Concord, Massachusetts 1840-1860.” The parts of this sonata are “Emerson,” “Hawthorne,” “The Alcotts,” and “Thoreau.” In the “Emerson” the Yale marching band suddenly breaks into the thorny, un-lyrical, revolutionary “new” music that can still dismay people who think they like music, and in “The Alcotts” there are stumbling notes of Beethoven’s Fifth—Louisa May Alcott trying to play Liszt’s piano version of Beethoven. In the “Thoreau” there’s a flute. The flautist is instructed by the score to “play ad lib.” Ives in a set of introductory essays claims that Thoreau was a composer, and that his walks around Concord (were) “the true American music.”
So the seed of my “Concord Sonata” was Ives’s piano suite. The immediate instigation was a search for the source of the mysterious passage in Walden (about losing a dog, a horse, and a dove). I found it in Mencius (whom Thoreau read in a French translation in Emerson’s library). My first thought was to write a “found at last!” essay, as no scholar of Thoreau had found the source. I read enough of them to see that the scholars didn’t know. (Actually, Thoreau gives us the source in A Week on the Concord and Merrimac Rivers—but only to wide-awake readers paying close attention.)
So, following Ives, I made a collage of “the essence of Thoreau.” I’d just spent three years reading the fifteen volumes of the Journal.
As with most of my “assemblages” I put in what seemed good images and quotations, and hoped that they’d work. The Mencius caught the eye of a Chinese translator, who designated a whole series of my fiction as “Kang Kede Sonatas” (by Dai Wen Po), published by the University of Beijing Press in their series of “Aromatic Belles Lettres by Barbarian Writers.”

Davenport’s find (out of “The Concord Sonata”):

In A Week on the Concord and Merrimac Rivers Thoreau wrote: Mencius says: If one loses a fowl or a dog, he knows well how to seek them again; if one loses the sentiments of the heart, he does not know how to seek them again. The duties of all practical philosophy consist only in seeking after the sentiments of the heart which we have lost; that is all.

The end of “The Concord Sonata” (out of Walden): “Fear not, thou drummer of the night, we too will be there.” Out of Walden. According to Ives: “Throughout Walden, a text that he is always pounding out is ‘Time.’ Time for inside work out-of-doors . . . Time to show the unnecessariness of necessities which clog up time. . .” Thus Ives’s “Thoreau”:

As he stands on the side of the pleasant hill of pines and hickories in front of his cabin, he is still disturbed by a restlessness and goes down the white-pebbled and sandy eastern shore, but it seems not to lead him where the thought suggests—he climbs the path along the bolder northern” and “western shore, with deep bays indented,” and now along the railroad track, “where the Aeolian harp plays.” But his eagerness throws him into the lithe, springy stride of the specie hunter—the naturalist—he is still aware of a restlessness; with these faster steps his rhythm is of shorter span—it is still not the “tempo” of Nature, it does not bear the mood that the genius of the day calls for—(it is too specific)—its nature is too external—(the introspection too buoyant)—and he knows now that he must let Nature flow through him and slowly; he releases his more personal desires to her broader rhythm, conscious that this blends more and more with the harmony of her solitude; it tells him that his search for freedom on that day, at least, lies in his submission to her, for Nature is as relentless as she is benignant.

Ives’s own drumming, time and its efflorescent upheavals, its writing. Thoreau’s quoting John Gower (Confessio Amantis) in an epigraph to the “Monday” chapter of A Week on the Concord and Merrimack Rivers:

I thynke for to touche also
The worlde whiche neweth everie daie,
So as I can, so as I maie.

* See, in Walden, under “Solitude”: “This is a delicious evening, when the whole body is one sense, and imbibes delight through every pore. I go and come with a strange liberty in Nature, a part of herself.”