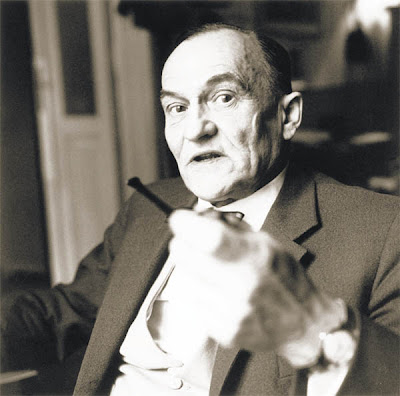 Henry David Thoreau, quoted by Guy Davenport in “The Concord Sonata” (out of the Journal, 1 April 1860):

The fruit of a thinker is sentences: statements or opinions. He seeks to affirm something as true. I am surprised that my affirmations or utterances come to me ready-made, not fore-thought, so that I occasionally wake in the night simply to let fall ripe a statement which I never consciously considered before and as surprisingly novel and agreeable to me as anything can be.

Lines that—in Thoreau’s sheer effortlessness of contact and lack of “any irritable reaching after fact & reason”—seem akin to Keats’s vaunted (1817) “Negative Capability” (or—mieux—that terrific pointing toward poetry’s simple innate grace in Keat’s [1819] “vale of Soul-making” letter: “May there not be superior beings amused with any graceful, though instinctive attitude my mind may fall into, as I am entertained with the alertness of a Stoat or the anxiety of a Deer?”) Too, Thoreau’s note recalls John Ashbery’s recently-noted talk of how “poetry is going on all the time inside, an underground stream. One can let down one’s bucket and bring the poem back up.” Ashbery’s casual reference there to “Heimito von Doderer’s novel The Demons” fetched me up out of my torpor. Sure enough: von Doderer’s pure Ashbery:

For we are all of us stupid and ignorant in the face of life as it unrolls before us; we have no way of recognizing the prolongation or line of flight of any given set of circumstances. . . .
And yet—in fact you need only draw a single thread at any point you choose out of the fabric of life and the run will make a pathway across the whole, and down that wider pathway each of the other threads will become successively visible, one by one. For the whole is contained in the smallest segment of anyone’s life-story; indeed, we may even say that it is contained in every single moment; start up your dredging machine and you take it all up, no matter whether ecstasy, despair, boredom, or triumph happens to fill the moving buckets on their endless chain of ticking seconds.

That out of the “Overture” to The Demons (Alfred A. Knopf, 1961), translated by Richard and Clara Winston, a mere dozen or so pages fronting the onslaught of the thousand or so that make up von Doderer’s ambling, witty, and stunningly overlooked novel. Von Doderer is capable of perfectly Ashberyean dithyrambs avant la letter:

And in the final analysis real life stands upon very frail feet, and its ultimate supports—if we sweep away all the alleged and accumulated rubble that has floated up around—its taproots which it sinks deeply into the soil of a reality incomprehensible to us in its details, would bear odd and almost absurdly simple names, if we wanted to and could honestly specify what they are—certain names by no means high-toned or solemn: the after-image of a color in the dark inner eyelid; the smell of a freshly varnished play table in our old nursery; the run in a stocking stretched over the delicate shaping of an ankle.

But for me there rises, beyond the horizon of a narrow life too fettered to the ever-recurrent same things, troubles, questions—for me there rises beyond the foreground of this mass of trash and secondhand goods and beyond the immediate view of roof and gardens, a great way beyond the massive towers of the Romanesque church which already lay claim upon the empty sky, seizing it for themselves as their appropriate background—far, far away, over a landscape already iridescent and blurred by distance, beyond even the cathedral with its “finger pointing toward the sky”—no, rather against the farthest blue fringe of the heavens, I discern a gigantic hand. It is a human hand, immensely far away and yet sharply and distinctly delineated, its every curve revealed, its every vein plainly visible—a human hand the size of towers or hills against the blue, above the dwarfed towers of the church and the toy building-blocks of houses and gardens. And this hand points for me beyond the ridiculous boundaries of an individual life, and above all these husks and boundaries, points like the outstretched hand of a gigantic clock whose extension in space is like a shot and rolls like the boom of a cannon through all my chambers.

An easily-quota’d plethora of detached limbs seemingly pervades the book: there’s “Mary K., a widow who has lost a leg in a streetcar accident”—she’s found listed amongst other principal characters (including one “Dwight Williams, an American lepidopterist”) in the book’s opening pages. Or consider what the narrator calls “the kind of diffuse plankton that drifts through one’s brain when one sits alone in a bistro, eating goulash and drinking beer” (and, in the next phrase, “the thread-pulling of association”) after noting the Beisl proprietor’s one-leggedness:

He was a well-set-up figure of a man but had only one leg. Nevertheless, he was afraid of nothing and no one. I was present once when he flatly refused to hand out playing cards to three drunken rowdies—as rare a phenomenon in this part of Döbling as crawfish in the ornamental pools of a park . . . But then anything can happen anywhere, though perhaps only once. On Daponte Gasse I once actually found a little scorpion in the bathroom, in good condition and very much alive. I hailed it as an emissary from the south, from the lands of the classics, cajoled it into a box with air holes and let it free at a lonely spot in the Prater meadows. Incidentally, specimens of the praying mantis (Mantis religiosa L.), a preposterously large insect of southern Europe, are also found in, of all places, the vicinity of Frankfurt am Main. . . .

Von Doderer’s half-bemused, half-melancholy willingness to follow along the aimlessly inquisitive sentence’s own unfolding, its “fall ripe.” And humankind itself somehow akin to a donkey, affably saturnine. (“Once . . . change is accomplished, a light depression may well ensue when, between freshly painted walls and newly varnished floors, surrounded by a host of hitherto unknown practical comforts, our good friends find the same old donkey who would, if he were a cow, stand before all the new splendor bellowing with unhappiness, as that animal stands moodily before the barn door when it is first let out in the spring. But as it is a donkey, it only wags its long ears slightly.”)