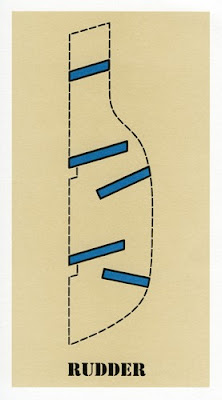 Ian Hamilton Finlay, “Rudder”
(“We understand the world by imagining its edges.”) 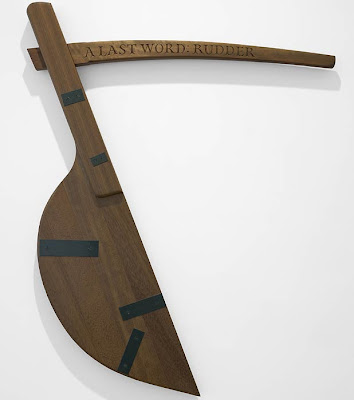 One dilemma: my execrable scrawl and hapless hand. If I want to maintain a kind of record—a commonplace book, little daubs of meaning waylaid (ambuscaded) in my reading—the easier thing is to “type it up.” My sorry history with notebooks, despoiled by blots, disfigured by the high renegade elbow, the jouncing undercarriage, the pothole in the road. Abandoned a few pages “in.” So—out of the Thomas A. Clark-edited A Model of Order: Selected Letters on Poetry and Making (WAX366, 2009). Ian Hamilton Finlay (to Pierre Garnier, 17 September 1963):

I approve of Malevich’s statement, ‘Man distinguished himself as a thinking being and removed himself from the perfection of God’s creation. Having left the non-thinking state, he strives by means of his perfected objects, to be again embodied in the perfections of the absolute, non-thinking life . . .’ That is, it seems to me, to describe, approximately, my own need to make poems . . . though I don’t know what is meant by ‘God.’

It’s still difficult for me to adjust to such forms. What we need is not one word ‘poetry,’ but 3 or 4 words? You use the poems to explore around in things—well, I understand that, too . . . The poem is like—the sequence—when you put your hand under a blanket to look for the hanky you’ve lost in the night, and you see the shape made by the hand searching about, and you see it on the blanket—do you know what I mean—that is how the poem works. And I myself do something else . . .

And (a solace, against the ravages of untoward clamp-jawed seriousness, what poetry-making’s clampdown twenty-first c. careerist demands demand of “us” each) Finlay’s remarks to Robert Creeley (Christmas Day, 1965):

. . . I think you should not worry about not writing poems, if you are still not. I know it is a misery when one feels like that, but you can remember against it, that you are very prolific when you do write, and that you already have a bulk of work that should satisfy anyone. Part of the problem . . . is that one would like (at such times) a kind of craft, to give each day a small satisfaction at least, and make sleep possible and food palatable . . . That was one reason I liked making toys—but that craft has rather vanished for me now, for, having ceased to amaze myself by my ability to cut a bit of wood with a fretsaw, I began to feel it as an art, and that is the end of pleasure . . . What we need is some simple craft at which we continually astonish ourselves by our extraordinary talent, while finding it mere child’s play, without judging it to be literally so (even if it is).

The glad import of amateurish “dabbling.” The constant longing to return to that root ludic compulsion. And (out of a 1967 letter to Ronald Johnson):

. . . I do like squares & rectangles; circles are right in real ponds but on the page they rather oppress me . . . Of course (re. THE UNFOLDINGS) the problem of all poems is one of form. It may SEEM that one can’t think of words, sentences, images, or whatever, but the truth of all such impasses is, that one has not found the form (the receptacle of the flow). But the form is not squares or circles, and it is folly (of which I would not hold you guilty) to suppose that one circle is like another, and that all are equally breast and sun.

Making one conjecture that Johnson’s “The Unfoldings” contained, in earlier typescript, a George Herbert-style circle? A Leeuwenhoek circle (microscopy’s enunciatory curve) with its “slow / ovals of animals” within? If so, it’d likely be at the point of Johnson’s perfect square of John Wilkins’s lines out of Of the Principle and Duties of Natural Religion (1675):

‘Whatever Natural doth by this Microscope appear adorned in all imaginable Elegance and Beauty: such inimitable Gildings and Embroideries in smallest seeds of Plants: in parts of Animals, the Head or Eye of a Fly; Such accurate Order and Symmetry in the frame of the most minute Creatures, a Louse or Mite, as no man were to conceive without seeing of them. Whereas the most curious Works of Art seem rude Work as if they had been done with Mattock or Trowel so vast a difference is there between the Skill of Nature and Imperfection of Art.’

The original by Wilkins reads:

Whatever is Natural doth by that appear adorned with all imaginable Elegance and Beauty. There are such inimitable Gildings and Embroideries in the smallest Seeds of Plants, but especially in the parts of Animals, in the Head or Eye of a small Fly: Such accurate Order and Symetry in the Frame of the most minute Creatures, a Louse or a Mite; as no Man were able to conceive without seeing of them. Whereas the most curious Works of Art, the sharpest finest Needle, doth appear as a blunt rough Bar of Iron coming from the Furnace or the Forge. The most accurate Engravings or Embossments, seem such rude bungling deformed Works, as if they had been done with a Mattock or a Trowel. So vast a difference is there betwixt the Skill of Nature, and the rudeness and imperfection of Art.

And (Findlay, again, to Michael Schmidt, 31 August 1980), a final complaint regarding “Detached Sentences” (what a sentence is, is a detachment—a parcel, a broken span):

Detached Sentences . . . I refuse to write present-day English, since this is secular and self-satisfied and instinctively believes that it has a basis in reality in a kind of total way. To me, language is both part of us and strange to us. Writing is an unnatural act. The world is exciting, facts are exciting; but reality can only be put down in ‘detached sentences’ (I borrow the phrase from Shenstone)—(he actually said Thoughts)—which acknowledge that they have spaces between them.

We understand the world by imagining its edges.
(Detached Sentences on This Cosmos)

William Shenstone, author of Poems on various occasions, written for the entertainment of the author (1737) and of Unconnected Thoughts on Gardening (1764). Gardener of the Leasowes estate in Shropshire. Shenstone: “Art should never be allowed to set a foot in the province of nature, otherwise than clandestinely and by night. Whenever she is allowed to appear here, and men begin to compromise the difference: night, gothicism, confusion and absolute chaos are come again.”

And: “Variety appears to me to derive good part of its effect from novelty; as the eye, passing from one form or colour, to a form or colour of a different kind, finds a degree of novelty in its present object which affords immediate satisfaction.”

And: “Variety . . . may be carried to such excess as to lose its whole effect. I have observed ceilings so crammed with stucco-ornaments that, although of the most different kinds, they have produced an uniformity. A sufficient quantity of undecorated space is necessary to exhibit such decorations to advantage.” 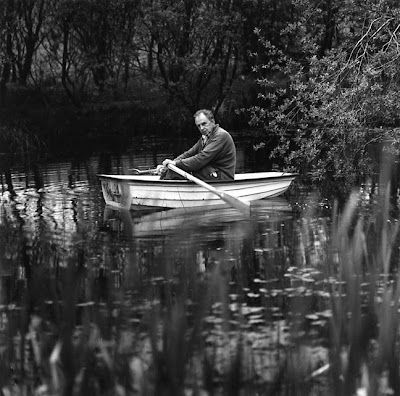