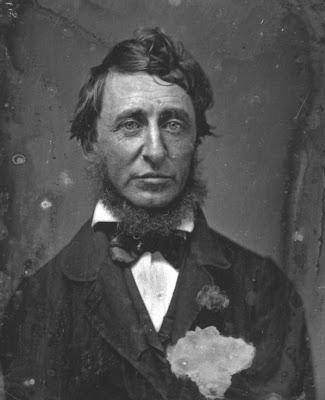 Henry David Thoreau, in the Journal (1851): “It is fatal to the writer to be too much possessed by his thought. Things must lie a little remote to be described.” That slant barely-penetrable veil quasi-robotic, one distancing oneself nearly out of one’s own doings, whence the coalescent unconvened force of poetry. The writerly receivership. “Often I feel that my head stands out too dry, when it should be immersed.” (I think of Pound’s lines in a letter [c. 10 November 1917] to Williams: “The thing that saves your work is opacity, and don’t you forget it. Opacity is NOT an American quality. Fizz, swish, gabble and verbiage, these are echt Amerikanish.” Repeated, by Williams, in the feisty “Prologue” to Kora in Hell: Improvisations. Letting fly the uncut stone into the ell-square pitkin, irregular, “saw-horned,” full. And Williams, in “A Unison”: “There it is / and we can’t shift it or change / it or parse it or alter it / in any way. Listen! Do you not hear / them? the singing? There it is and / we’d better acknowledge it and / write it down that way . . .”) Akin to Thoreau’s odd, stately sense of detachment, the writer in receipt of a full-blown music un-analyzable. Out of A Week on the Concord and Merrimack Rivers:

Poetry is the mysticism of mankind.
The expressions of the poet cannot be analyzed; his sentence is one word, whose syllables are words. There are indeed no words quite worthy to be set to his music. But what matter if we do not hear the words always, if we hear the music?
Much verse fails of being poetry because it was not written exactly at the right crisis, though it may have been inconceivably near to it. It is only by a miracle that poetry is written at all. It is not recoverable thought, but a hue caught from a vaster receding thought.
A poem is one undivided unimpeded expression fallen ripe into literature, and it is undividedly and unimpededly received by those for whom it was matured.
If you can speak what you will never hear, if you can write what you will never read, you have done rare things.

(The poem a wild fruit plucked.) Just to place another stone up against the structure, there’s Williams writing to Kenneth Burke (21 November 1921), rather facetiously (pragmatically and sassily) “mystic”:

I suppose I am at heart a mystic. But who isn’t until he clarifies his meaning or dies trying to. Even the Arabs or the Phoenicians, or whoever it was that invented the rule of three, were mystics until they found out pretty damned early that they were fooling themselves and so had to invent the science of mathematics to save their faces. Contemplate that last sentence awhile and you’ll know a hell of a lot more than I knew—once.
I like your theories—they’re so puerile that they don’t count, so you have plenty of opportunity to write and save your face . . . Because you CAN write.

( Probably a whole furtive history of American letters could be assembled, divided between those who spouted “so puerile that they don’t count” theories and wrote, and those whose supposedly “do count” theories disallowed any such grace . . .) Later in the letter Williams, lamenting Paul Rosenfeld’s lack of “flare or flaire or insanity to temper his bricklaying” says, maybe a little peevishly [?], “Yes, writing is bricklaying”:

L’architecture c’est poser un cailloux sur un autre.
You like that? My brother handed it to me.

(“Architecture is putting one stone on another.”) Example of the “puerile” at work—not impossibly (though not likely) responding to Williams’s quoted line: A. R. Ammons’s tiny piece called “Their Sex Life”:

One failure on
Top of another.