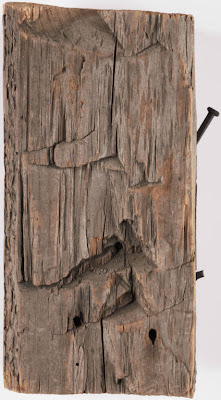 Stud with nails, out of Thoreau’s cabin at Walden Pond
(Beinecke Rare Book and Manuscript Library)

How soonish the books—examined with fealty sputtering, diligence caught up out of the day’s sloughs, moments thieved out of supposed industry—commence a nattering. Some smallish correspondence noted causes a veering, bookishness adding to bookishness, and the whole grope-intelligibility is put to the block. So Walter Pater, in “Style” (1888)—a piece beginning, “Since all progress of mind consists for the most part in differentiation, in the resolution of an obscure and complex object into its component aspects, it is surely the stupidest of losses to confuse things which right reason has put asunder, to lose the sense of achieved distinctions . . .”—says of the “literary artist”: “the material in which he works is no more a creation of his own than the sculptor’s marble.” Humph. So, a chance espying of some lines out of Coleridge’s “Dejection: An Ode” (1802):

Though I should gaze for ever
On that green light that lingers in the west:
I may not hope from outward forms to win
The passion and the life, whose fountains are within.

Isn’t that fons et origo for Thoreau’s Journal-chewing for February 2, 1841?

It is easy to repeat, but hard to originate. Nature is readily made to repeat herself in a thousand forms, and in the Daguerreotype her own light is amanuensis, and the picture too has more than a surface significance,—a depth equal to the prospect,—so that the microscope may be applied to the one as the spy-glass to the other. Thus we may easily multiply the forms of the outward, but to give the within outwardness, that is not easy.

Maybe. And maybe of an obviousness indiscernible here in my toolbox.* So the half-assed onslaught of bookishness, evidentiary mustering. Rooting in the compost. Leading precisely and invariably to a loss of “the sense of achieved distinctions.” That is, to a point where something arrives (“The bean bursts noislessly through the mould in the garden . . .”) Somewhere Thoreau says (akin to Whitman’s “This Compost”—“It grows such sweet things out of such corruptions, / It turns harmless and stainless on its axis, with such endless successions of diseas’d corpses, / It distils such exquisite winds out of such infused fetor, / It renews with such unwitting looks, its prodigal, annual, sumptuous crops, / It gives such divine materials to men, and accepts such leavings from them at last . . .”): “Decayed literature makes the richest of all soils.” And, of a day spent in Cambridge Library (Journal, March 16, 1852):

The library a wilderness of books. Looking over books on Canada written with the last 300 yrs could see how one had been built upon another each author consulting & referring to his predecessors. You could read most of them without changing your leg on the steps . . . I saw that while we are clearing the forest in our westward progress we are accumulating a forest of books in our rear—as wild & unexplored as any of natures primitive wildernesses. The volumes of the 15th 16th and 17th centuries which lie so near on the shelf are rarely opened are effectually forgotten—& not implied by our literature and newspapers. When I looked into Purchas’ Pilgrims—it affected me like looking into an impassable swamp—10 feet deep with sphagnum where the monarchs of the forest covered with mosses & stretched along the ground were making haste to become peat. Those old books suggested a certain fertility—an Ohio soil—as if they were making a humus for new literatures to spring in. I heard the bellowing of bull frogs & the hum of mosquitoes reverberating through the thick embossed covers when I had closed the book.

He disapproved of the way America was going and he refused point-blank to go along with it. Since his day, both America and the world have gone much farther along the road they chose, and they seem even less likely than they did in Thoreau’s day to heed his injunctions or even to see how they could possibly be heeded. But the dissatisfaction which he expressed with things as they are has come to seem more and more justified and his prophecies have in many respects been fulfilled.
His contemporaries lived in an age of growing complexity and hope; we in an age of growing complexity and despair. “Progress” was not in his day a word of which even progressives were critical . . .

Men have an indistinct notion that if they keep up this activity of joint stocks and spades long enough all will at length ride somewhere, in next to no time, and for nothing; but though a crowd rushes to the depot, and the conductor shouts “All aboard!” when the smoke is blown away and the vapor condensed, it will be perceived that a few are riding, but the rest are run over—and it will be called, and will be, “A melancholy accident.”

* I am thinking of Thoreau’s only half-riotous talk (“Economy is a subject which admits of being treated with levity, but it cannot so be disposed of”) in the “Shelter” chapter of Walden regarding the possibility of dwelling in such a box:

I used to see a large box by the railroad, six feet long by three wide, in which the laborers locked up their tools at night; and it suggested to me that every man who was hard pushed might get such a one for a dollar, and, having bored a few auger holes in it, to admit the air at least, get into it when it rained and at night, and hook down the lid, and so have freedom in his love, and in his soul be free . . . You could sit up as late as you pleased, and, whenever you got up, go abroad without any landlord or house-lord dogging you for rent. Many a man is harassed to death to pay the rent of a larger and more luxurious box who would not have frozen to death in such a box as this.