The acanthus is a weed that signified for the Greeks neither fruit nor flower but was prized for another reason. Because of that they raised it to the head of their temple column. Dock with us is a comparable weed growing unheralded about the edges of the dung-heap. Of its roots the practical (and hungry) Chinese make a delicacy.

Williams’s love of the “weed,” meaning whatever is found “growing unheralded about the edges of the dung-heap.” The lovely lowly burdock, big-leaved and prickly. Think of the “muddy fields / brown with dried weeds, standing and fallen” Williams records along “the road to the contagious hospital” in Spring and All, that “reddish / purplish, forked, upstanding, twiggy / stuff . . .” I note some oddly similar lines out of Tolstoy’s Journal (1896):

Yesterday I walked through a twice ploughed, black-earth fallow field. As far as the eye could see, there was nothing but black earth not one green blade of grass, and there on the edge of the dusty grey road there grew a bush of burdock. There were three off-shoots. One was broken and its white soiled flower hung; the other also broken, was bespattered with black dirt, its stem bent and soiled; the third shoot stuck out to the side, also black from dust, but still alive and red in the centre . . . It makes me want to write. It asserts life to the end, and alone in the midst of the whole field, somehow or other has asserted it.

George Steiner, in Tolstoy or Dostoevsky: An Essay in the Old Criticism (1959), partially quotes that to claim Tolstoy’s supposed “negations were axe-strokes to carve a clearing for the light.” Williamsesque: “the stark dignity of entrance . . .” Struck, reading the Autobiography, by Williams’s sense of the “underground stream” of poetry (released by thwart changeable vicissitudes of doctoring):

Forget writing, it’s a trivial matter. But day in day out, when the inarticulate patient struggles to lay himself bare for you, or with nothing more than a boil on his back is so caught off balance that he reveals some secret twist of a whole community’s pathetic way of thought, a man is suddenly seized again with a desire to speak of the underground stream which for a moment has come up just under the surface. It is just a glimpse, an intimation of all that which the daily print misses or deliberately hides, but the excitement is intense and the rush to write is on again. It is then we see, by this constant feeling for a meaning, from the unselected nature of the material, just as it comes in over the phone or at the office door, that there is no better way to get an intimation of what is going on in the world.

“The unselected nature of the material”: the human stream akin to the lingo stream. I recall, too, oddly (I rarely think of Ashbery’s being aligned with Williams), John Ashbery’s remarks in an interview in the Paris Review:

. . . since I don’t have very much free time (poets seldom do, since they must somehow make a living), I’ve conditioned myself to write at almost any time. Sometimes it doesn’t work, but on the whole I feel that poetry is going on all the time inside, an underground stream. One can let down one’s bucket and bring the poem back up. (This is very well put in a passage that occurs early on in Heimito von Doderer’s novel The Demons, which I haven’t to hand at the moment.) It will be not dissimilar to what I have produced before because it is coming from the same source, but it will be dissimilar because of the different circumstances of the particular moment.

One’d like to think that “Heimito von Doderer’s novel The Demons” is some complicated Ashberyean in-joke. However, as is usually the case with Ashbery’s seeming arcana, one—investigating—is inevitably led straight to the thing one seemingly needs. Von Doderer (Austrian, 1896-1966) apparently proceeded with novel-writing under a sense that “the real” is a thing constructed—out of loose ends, circumstantial abutments, abrupt meanderings—by individual apperception—or “resistance to apperception” [Apperzeptionsverweigerung]. Right about where in the doddering cosmos of words one finds oneself now, here. 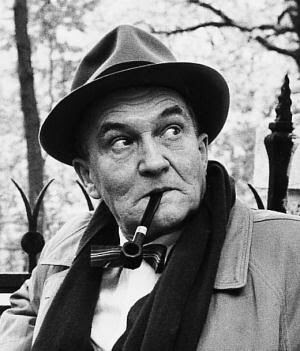