The kind of thing one amuses oneself with, and abandons to the lolling season. Beckett apparently fond, too, of Dr. Burney’s story (record’d by Boswell):

‘He had come down one morning to the breakfast-room, and been a considerable time by himself before anybody appeared. When, on a subsequent day, he was twitted by Mrs. Thrale for being very late, which he generally was, he defended himself by alluding to the extraordinary morning, when he had been too early. “Madame, I do not like to come down to vacuity.”’

Or coming down with vacuity, that recurrent blankness. Oddly enough, “vacuity” is a term undefined by Johnson’s Dictionary, though it lifts its snout in defining the words bolster (“A pad, or quilt, to hinder any pressure, or fill up any vacuity”), chasm (“A place unfilled; a vacuity”), fully (“Without vacuity”), gap, hole, hollow, plenitude (“Fulness; the contrary to vacuity”), vacancy and voidness. Recall Gertrude’s query to Hamlet:

Alas, how is’t with you
That you do bend your eye on vacancy
And with the incorporal air do hold discourse?

(Recall the joyous ferocity of shouting along to The Sex Pistols doing “Pretty Vacant”—gauding up the absences. Or recall Frank Zappa’s line about filling the air: “I decorate time for my own amusement . . .I just go around decorating pieces of time, with physical activity, notes, agitated air, and things like that.”) Hamlet, too, is populating the chasms and gaps, augmenting the empty air. Gertrude (continuing):

Forth at your eyes your spirits wildly peep;
And, as the sleeping soldiers in the alarm,
Your bedded hair, like life in excrements,
Starts up, and stands on end. . . .

I love how the two similes attach’d to the hair come around (transitivity breakdown: a=b, b=c, therefore a=c) to meet, so that “sleeping soldiers” jumping up = “life in excrements,” how it is compell’d to spring forth . . . “We” too, we recoup, we fill (and refill) the repeatable voids—the elementary writerly task. (Beckett’s phrase for Giacometti’s theory of failure—“l’échec à récupération”—“recuperated failure”—“I can’t go on, I'll go on.”) So James Lord (A Giacometti Portrait), recording Giacometti’s repeat’d “undoings” of paintings, sculptures (“Now I’ve got to undo everything. One should try to succeed in undoing everything and then doing it all over again very quickly, several times in the same sitting. I’d like to be able to paint like a machine”):

This constant expression of self doubt is neither an affectation nor an appeal for reassurance on his part but simply the spontaneous outpouring of his deep feelings of uncertainty as to the ultimate quality of his achievement. In order to go on, to hope, to believe that there is some chance of his actually creating what he ideally visualizes, he is obliged to feel that it is necessary to start his entire career over again every day, as it were, from scratch. He refuses to rely on past achievements or even to look at the world in terms of what he himself has made of it. . . .

So the loll retrieves its continuum, snow-nick’d and dickering, a door banging in the wind:

Against the self-
doubt and angst, its
way of undoing, put
the social toys of
the ludibrium, writ play-
things one tosses out
into a common space,
its cut off purlieus
purloin’d for that moment.
Beckett call’d poetry “that
intractable beast, an un-
tamed horse.” Regarding art:
Il faut retrouver l’ignorance.

Off into the omniferous panniers of the “stretch.” À l’année prochaine. 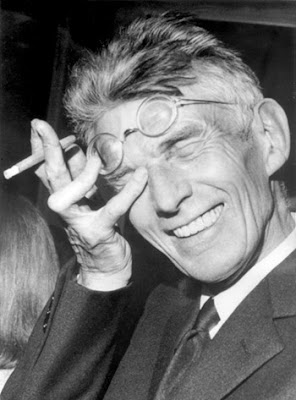