A kind of blank sullen rebelliousness, a refusal to allow the gears of thinking to “catch”—making moment of serendipitous lurches here and there. (Think of writers currently exploiting the data-stream by pulling sentences individually out of it like prize-winning fish. Whyn’t a critical practice diligently mimic that?) Leading me to think of “sentence-ry.” There’re parcels roundabout of Anselm Berrigan’s larger piece call’d “Primitive State”—some of it collect’d in the “What Where” chapbook series under the title Primitive State (The Corresponding Society, 2010)—defiantly insisting on the intact individuality of each of its sentences (rather recalling Ezra Pound’s remark to Donald Hall: “The only chance for victory over the brainwash is the right of every man to have his ideas judged one at a time”):

It was hard to submit to the difficulties, or the various layers of marketable air.

I am assuming one knows what it is to be a shaman.

I understand my debt is an investment in my future.

I have trouble relating to the commercialization of foreplay.

I should be more fucked up than this horrible phone.

Regionally speaking, we shit the bed.

She will devour any object placed low enough.

Amphetamine tests giving the game back to the kids, thwarting heathens no longer operable.

The replay indicates a sneak in under the tag.

That surreal twang, the baiting of articles into a contextual wipe system, does believe in love.

In a museum gallery a book dismembered & splayed across a wall.

I was less than bolstered by the center, the bobbing head, an overheated constellation lashing out, coma rich.

My memory of accomplishment routinely exercises its liberty to strike.

Getting picked off take the breath away.

For I examine my appropriations’ triplets and give them purpose.

For my disparity’s attenuated drool, impressed by the willful poverty of the alchemist, considers a local solution.

For the ache within you that may only be muted if your payments are timely deserves a stake in our urgency.

For confidence is a stain of tangibility.

And so forth. One notes Berrigan’s nod to a plausible precursor in the tiny string of sentences beginning with “For . . .”: Christopher Smart. Though the ready abandonment (“Foliage shakedown” implying both the use of force and a momentary giddy revel) makes the nod into no more than a temporary node in the data-stream, an exemplary local clump-up. What’s the relationship here with the supposed “New Sentence”? I think of Marx’s lovely sotto voce to the first sentence of The Eighteenth Brumaire of Louis Bonaparte: “He forgot to add: the first time as tragedy, the second as farce.” And I think of Gertrude Stein’s insisting that “paragraphs were emotional and sentences were not. Paragraphs are emotional not because they express an emotion but because they register or limit an emotion.” And I think of Ron Silliman’s bare schema of New Sentence qualities (how unnaturally indifferent to feeling its tenets seem, as if language were an inert and rather nonhuman thing):

1) The paragraph organizes the sentences;
2) The paragraph is a unit of quantity, not logic or argument;
3) Sentence length is a unit of measure;
4) Sentence structure is altered for torque, or increased polysemy / ambiguity;
5) Syllogistic movement is (a) limited (b) controlled;
. . .
8) The limiting of syllogistic movement keeps the reader’s attention at or very close to the level of language, the sentence level or below.

“Second as farce”: by sheer roil and plenty, overstocking, Berrigan’s sentences refuse syllogistic movement (and force an attending to, each by each). The difference: a feeling of whole-dog engagement with the info-bombardment, a trucking with it, unhinder’d by any formal registry. Berrigan: “I trained my instincts to turn away from the banal and discovered I could no longer order my sentence.”

Other sentences. Graham Foust, in both To Anacreon in Heaven (Minus A Press, 2010) and To Graham Foust on the Morning of His Fortieth Birthday (The Song Cave, 2010), is working a similar, if less manically info-echt vein. Here’s a slice at random out of the latter book:

Allow me to pull that mouth off.

You and I are one another in the ways the closest whisper might be called a kiss, and here we are—kiss or no kiss, kiss or not—up close and vanished as per standardized desire.

That said, I’m both camera and satellite, so let’s go live now to where it’s night and catch crowds rushing out of various overpriced events converting their initial impressions into speech they can’t be bothered to commit to memory.

In your sad and American manner, you get as choked up about the collective as you do over the individual.

When it comes to songs you’re up and down for them, whether anthem or unfathomable murmur.

When it comes to poetry, prose is the World Trade Center of language, free verse the Goldman Sachs.

Odd to be referred to as the real one, yes, but it’s not so difficult not to name things.

“Rain-bright paint”; “some idea of what I’ve done”; “smudged tobacco on the hospital steps.”

There was a time before you’d forgotten such words, which means that at one point your mouth was probably warm from having used them.

I’ve not accused you of repose in a field of unknown results at noon on the first Tuesday of each month, nor have I accused you of suicide, of loving the void so much that you thought you’d make another one up, but if you’re alive—even if you’ve achieved complete amnesia—I’d like those words with you.

And if not, just tell me—I’ve got some perfume.

A little bird hit you.

The address’d “you”—Foust or other—making local, nigh-personal, the strange vortex of desires (note how Berrigan’s sassy global “commercialization of foreplay” is only a more public exemplifying of Foust’s close-up “standardized desire”), that ineluctable rampancy of being “both camera and satellite”—recorder and transmitter, constantly able—as the newsroom donkeys say—to “go live now” wherever, and indefatigably. In spite of the slippery focus of the address (“you”), there’s the sense of one’s consciousness completely invaded: Foust’s opening line straight off the airwaves: “There is a town in north Ontario.” (See, too, the funny blip—“ sad and American manner”—in To Anacreon in Heaven: “Often I am permitted to return a few phone calls from a meadow.”) (And, toward the end of To Graham Foust . . .: “Remove the gears.”) Some pervasive communal longing to slip the reins of the “era” . . .

And the nigh-un-sentenced. Out of Tom Pickard’s lovely memoir More Pricks Than Prizes (Pressed Wafer, 2010), “Ex Wing Commander” Basil Bunting’s pre-verdict letter (the “almost innocent” Pickard’d got scoop’d up in a drug raid: “I opened the door and six hefty guys stormed into the narrow corridor, two of them armed, and pinned me to the wall. ‘You’re bust, bonny lad.’”):

Prison is hard to bear, but it is not unbearable, and if you want to keep your eyes open to what is around you (as I’m pretty sure you will) you’ll pile up a stock of experience you can make good use of in poetry eventually. Keep objective. Your own unhappiness is not capital stock, but what your eyes see and your ears hear is . . . I quite expect neither to hear from you nor to be able to write to you if you are sentenced . . . I have always admired your courage against odds, your readiness to learn whatever there is to learn, your goodwill even toward people who have earned no good will; and I value your ear for rhythm, your readiness to cut down to what’s essential, the way you evoke an emotion without a word that isn’t concrete and factual.

Pickard “found not guilty by a majority verdict.” 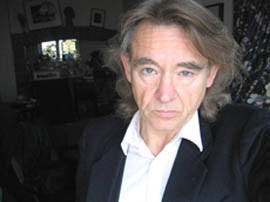