Early in The H.D. Book (University of California Press, 2011) Robert Duncan unleashes a lovely line that occasions its own rhythmic syncope. Of an H.D. piece (“Heat”), he says it exhibits “form not by convention kept but by the pulse of its own event.” The line is deftly limn’d against a summary of how—conventionally—schooling provides a precisely work’d up and wholly acceptable set of cultural props, common supports, grace notes for the (c. 1960) burgeoning middle class (“We were in the proving ground of the professional middle class, where we were to learn by heart the signs and passwords of that class.”) And:

In each of our histories, we were to repeat the historical victory of the Rise of Capitalism. Were there “Charm’d magic casements, opening on the foam / Of perilous seas, in faery lands forlorn,” we were schooled not to be taken in by them but to take them in, to appreciate the poet’s fancy, even as our forefathers no longer worshipped grove and fountain but exploited wood and water power as public utilities. . . . Work by work, author by author, the right roads were paved and marked, the important sights were emphasized, the civic improvements were pointed out where the human spirit had been successfully converted to illustrate the self-respectability of civil men, and the doubtful, impulsively created areas or the adventuring tracks into back-country were deplored.

Event’s pulse that of “impulsively.” Versus the civic prompt, acceptably deliver’d: think how Keat’s “Ode” ends: “Fled is that music.” Where Duncan’s particularly good: making distinct the original meaning of the Poundian image—“an intellectual and emotional complex”—by noting, reiterating, how “the complex does not proliferate but is realized ‘in an instant of time’”: “For Pound, as for H.D., as for Lawrence or for Williams, the image was not an invention but a numinous event in language, a showing forth of a commanding Reality in the passing personal real.” Using the now wholly debased Joycean term epiphany. Duncan counterweights the strip’d and fleet image-event (“the nexus of an experience”) with what he calls “the opportunity of an expression, of a striking figure in the author’s rhetoric”:

Whatever else they were, the images—in Hulme’s poem “Autumn,” the ruddy moon that may be like a red-faced farmer peering over a hedge, or in Eliot’s “The Love Song of J. Alfred Prufrock,” the evening that may be like a patient etherized upon a table—are not mythopoeic in their operation or intent, not deepening our sense of the reality of moon or of evening, but present extension of their author’s wit, personal conceits.

Rhetoric the dissipating angel. Though Duncan’s intent, too, is seemingly to reject the “economy” of Pound’s imagism, “the perfectionist drive,” the “imperative toward perfection that haunts the aesthetic propositions of Imagism,” a kind of limit’d range of numina—that “passing personal real.” A way of making room for H.D.’s—and Duncan’s own—raptures ungainly, diffident, wilder. Think of how Duncan quotes Williams’s Preface to the 1954 Selected Essays—“Poetry is a dangerous subject for a boy to fool with, for the dreams of the race are involved in it”—and, too, how Williams sought in Paterson (according to the Autobiography) “to find an image large enough to embody the whole knowable world”: Duncan’s sheer insistence that the world is large, and that one be not mere, or restrain’d, in its depicting:

There was no thing that was not, given the proper instant in time and intent in vision, Image. There was no image that was not, properly rendered, the nexus of divine and elemental orders in the human world. Anguish and ecstasy gave presence to, and were aroused by a presence in, the natural world. Rocks and sea, thunderous surfs, gardens and orchards actually exposed the soul to the spiritual presence, flooded it with the presence—all but unbearably—and yet, at the same time, sheltered it within the presence.

(Duncan’s own verbiage tends to go washy and vague in the presence of the presence. . .) He quotes (apropos the rhetor’s river-like gush?) a lovely line—“H.D.’s proposal in the Imagist Anthology of 1915”: “A new cadence means a new idea.” (Recalling a thing I just read by Bhanu Kapil: “Cadence allows the writer to discharge a narrative from her nerves.”) “Cadence” out of the French cadence, out of the Italian cadenza, “falling.” “The literal sense is ‘action or mode of falling, fall.’” “Cadence is in form a doublet of chance.” The prompt serendipity of cadence. One is subsumed by it. See, too, Duncan’s sense of falling under the spell of the writing (extend’d, here, boldly, to the writing life):

The work of art is itself a living presence in which its creator stands. . . . “Am I the god?” Pygmalion asks:

or does this fire carve me
for its use?

Just as there are certain events in actual life that are so charged with the information of a content that is to be realized in the maturation of the soul or form of the total lifetime, and as there are certain dreams that flood our active consciousness with the forms of unconscious, as yet unborn, facts of our identity, so, for the poet, there are poems that are prophetic of a poetry that is to be realized only in the fullness of the poet’s life . . . As the artist works to achieve form he finds himself the creature of the form he thought at first to achieve. The role of the poet, his craft, is to seek out the design in the carpet, to come to know and then to acknowledge his identity in the terms of a poetry he but belongs to. The fire is indeed to carve the poet for its use.

Struck by something like Duncan’s “megalomaniac largesse.” (A phrase that wants to praise and to damn.) Determined to fossick the whole territory, unabash’dly. What he notes of Pound’s self-assessment (of The Cantos, in the 1938 Guide to Kulchur), one’d possibly apply to the marvelous rangy fatuity (”to praise and to damn”) of The H.D. Book: “the defects inherent in a record of struggle.” 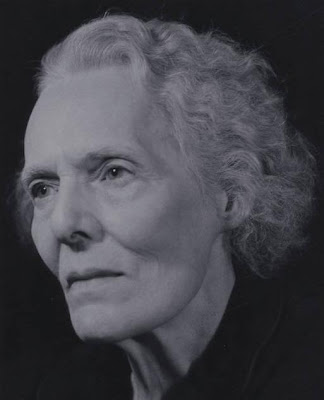