Easily distract’d, rarely distraught. The dry hygienic sound of nail clippers at work, snipping off cellular chits, coded with the chromosomal misalignments of somebody or other the memorious. Imago mundi, anima mundi: like being caught up and pummel’d by a bully, all senses become one: a moment of complete reifying, everything an uproarious and implacable thing. Stuck in the simulacral gruel. The world in a seizure, its “mix” of sunder’d particulars squeegee’d out into one endless smear, the color of oatmeal. Ever it commenceth thus: the roil of immediates, the dog’s slavering noises, the distant lavatory machinery, the night’s snooker’d reverie’s final nose-thumbing of day. Petulant tug of Tiresias. To confront the stony void. Whence one might slip under the lip of earth. Giorgio Agamben (The Man Without Content):

In Les fleurs de Tarbes, Jean Paulhan takes as his premise a fundamental ambiguity in language—namely, the fact that it is constituted on the one hand by signs that are perceived by the senses, and on the other by ideas associated with these signs in such a way as to be immediately evoked by them—and makes a distinction between two kinds of writers. There are the Rhetoricians, who dissolve all meaning into form and make form into the sole law of literature, and the Terrorists, who refuse to bend to this law and instead pursue the opposite dream of a language that would be nothing but meaning, of a thought in whose flame the sign would be fully consumed, putting the writer face to face with the Absolute. The Terrorist is a misologist, and does not recognize in the drop of water that remains on his fingertips the sea in which he thought he had immersed himself; the Rhetorician looks to the words and appears to distrust thought.

One hauls things “out” of the continuum, word’d bibelots (jewels of thinking in commonplace duds) or gaud’d ornamental words (dragging, one is certain, something like thinking along behind). Fire and water, each capable of extinguishing the other. (Think, though, of Rémy de Gourmont’s “verbal amnesia,” how “men think in ready-made sentences . . . Words fail to arrange themselves into any new positions. They are presented in the same familiar order in which the writer’s memory received them.”) Or, I keep thinking about Alfred Jarry. How he carry’d a Bulldog pistol. How Ossip Zadkine sculpt’d him writing (notebook splay’d out across the handlebars of Jarry’s beloved bicycle), pointing the Bulldog off behind into le néant. A story of a 1905 dinner chez poet Maurice Raynal where Jarry fired the gun at the Catalan sculptor Manolo. Raynal’s report (written with twenty-eight years intervening), out of Jill Fell’s Alfred Jarry (Reaktion Books, 2010):

That evening several friends had got together at my little place in the rue de Rennes. Among these were Apollinaire, Maurice Cremnitz, Picasso, André Salmon, Manolo, Max Jacob, Alfred Jarry and three young women who were all expecting, I think. The dinner had been quite lively. A hunting friend had sent me some magnificent wild duck, which were the pièces de résistance of the dinner. When they were put on the table, Jarry offered his services. ‘I’m an expert at carving these birds,’ he said, then grasped the birds with both hands and tore them to pieces.

Apparently—everybody blotto—Manolo’s stubborn sobriety trigger’d Jarry’s opprobrium: “If your Manolo doesn’t get out, I’m going to kill him.” Raynal:

Out of his pocket he all at once produced a foul rusty little Bulldog revolver. Greasy as an old wallet, it had no shine on it and I assumed that it was fortunately in too bad a state to work, the idiot, when suddenly he brandished it in the air and fired two shots at Manolo.

Raynal, writing out of the banal ephemera of a possibly slipshod memory, claims nobody—presumably “in the hubbub”—took any notice. Apollinaire writes of the incident “within four years” of its occurrence:

We had been invited to a dinner in the rue de Rennes. During dinner, someone having wanted to read his hand, Jarry proved that all his lines were double. To show how strong he was, he turned the plates over and broke them with his fists, ending up by injuring himself. The aperitifs and wine had gone to his head. The liqueurs were the last straw. A Spanish sculptor wanted to introduce himself and was politely complimenting him. But Jarry ordered this bouffre to get out and not come back again, assuring me that the fellow had just made him some disgraceful proposals. After a few minutes the Spaniard came back, and Jarry immediately fired a shot at him. The bullet embedded itself in a curtain. Two pregnant women who were present fainted. Nor were the men happy with the situation and two of us took Jarry out. In the road he told me in Père Ubu’s voice: ‘Wasn’t that just beautiful as literature? But I forgot to pay for the drinks.’

Apollinaire’s story omits Picasso, though it does refer to an unnamed artist friend who keeps (the now-disarm’d) Jarry’s Bulldog for some months following the incident. In Max Jacob’s draft version of the incident, he and Picasso went together to Raynal’s dinner:

Picasso and Jarry took to each other immediately and stayed friends thereafter, without seeing each other very much . . . I remember having been drunk . . . and, after regrettably falling asleep on the stair carpet, I was woken by shots from a revolver. Jarry was yelling ‘Death to the bugger!’ or ‘Out with the buggers!’ The following day I learnt that he was after Manolo! . . . Well, this was the revolver that became Picasso’s. Jarry give it to him. It is possible that Picasso has it still for from that moment on he was never parted from it.

I love that story (is it a story, or several stories?) According to Jill Fell, one Picasso expert (Pierre Daix) “claims that there has never been any question of either Jacob or Picasso having been at Raynal’s dinner.” Whole cloth Max. Picasso deny’d—to Hélène Parmelin, who wrote it down (“he had gone to see him one day with Apollinaire, but Jarry was out”)—ever meeting Jarry. Jean Paulhan (The Flowers of Tarbes):

We had to admit that Terror has one particular merit: it relies solely on observation and experience, without ever asking us to surrender meekly to feelings, or to the taste for surprise or mystery. It is, in short, perfectly scientific and wise (despite appearances to the contrary) and worthy of an age—our own—in which nothing is certain, except for one clear idea. Only this idea makes our discovery all the more disconcerting.
For Terror, when it was put to the test, was found to have been mistaken in what it observed. Its experiment was false, and its conclusion fanciful. What science shows us is the exact opposite of what we were told. We have, then, come up against the strangest of obstacles. . . . 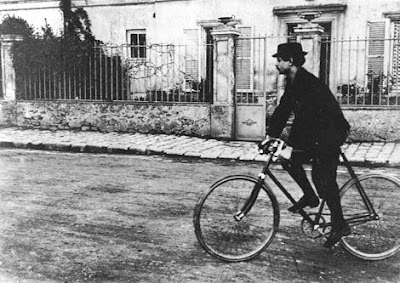