Limping along here like the cricket the one-eyed Jack Russell captured in a corner of the cellar, mouth’d with utmost daintiness bristling, and spat out in some homely combo of inert terror and unabash’d disgust, a shiny black semi-chirping intricacy, or indelicacy. No florilegium , no flourish, nabbed by the cold. “Like the wild grass fetch’d up by the wind unto the roof, it withereth before it come forth.” Odd moments occupy’d by reading Stendhal’s The Life of Henry Brulard (my lit capability brown’d down to the to-and-fro plungings of its horse-play, its sheepish reiterant sketch helter-skelter, its matte refusal of encomia to itself)—its dog-ear’d pages marking an unlikely chrestomathy. The writerly text:

A novel is like a violin-bow, the box which gives off the sounds is the soul of the reader.

Early literary criticism, of “a poem by a Jesuit about a fly drowning in a jug of milk”:

And a “horror of verse”:

Even in Racine, who strikes me as very eloquent, I find plenty of padding.

Stendahl’s story of using the Gradus ad Parnassum, a primer for the composition of Latin verse—“Lines were dictated to me, leaving out the epithets, for example:

I opened my Gradus ad Parnassum; I read all the epithets for flies: volucris, acris, nigra, and, to get my hexameters and pentameters to scan, I chose nigra, for example, for mosca, felices for annos. . . . Emulation is absolutely essential if we are to be got to swallow such ineptitudes.” (Noted: how Stendhal scripts the Italian mosca for the correct musca.) I recall how some years back, “testy and crimping like some arthropod or arachnid” up the lower slopes of Parnassus (all Sensurround and gimmickry), being ask’d by some temporary magister or other to redact a piece using the syntactical armature of another, and how I “took” a Philip Levine poem and changed both principals and epithets so that the brute redundancy of Detroit factory work turn’d (like cider) under the spell substitutory of mere words to a tiny working diorama of Beetle Bailey lazily misbehaving, with a Sarge who “fart’d in thunder”—a nod, I see now, to Ashbery’s “Farm Implements and Rutabagas in a Landscape.” Emulatory rot, though it, too, “shall not perish from the earth.” (That Lincolnesquerie hinting that such substitutory provoking—“far above our poor power to add or detract”—may well serve to test what “can long endure.”) Stendhal:

I had . . . a violent liking for optics, which led me to read Smith’s Optics in the Public Library. I made some spectacles for seeing the person next to you while seeming to look straight ahead.

(See, too, Bob Perelman’s “Essay on Style”: “A composer must do precisely what a composer is nearest to. I close my heart to momentary whim, which as far as I can see, I always guess.” It replicatory and derive of Jack Spicer’s “When I translate one of your poems and I come across words I do not understand, I always guess at their meanings. I am inevitably right” out of the second letter to Lorca . . . Or, see: “Some agreeable piece of boreal lingo screwed on quietly to itself miles away.” “Words are what sticks to the real.”) Stendhal: “. . . where my childhood is concerned I only have very clear mental pictures, without dates and without any physiognomy. ¶ I write them down more or less as they come to me.” That swell antic hay of Stendhal: writing as grasping at straws. (Or grabbing at a straw man.) “I entreat the reader, should I ever find one, to remember that I have no pretensions to truthfulness except in what concerns my feelings; as for the facts, I have never had much memory.” (As if Stendhal’s The Life of Henry Brulard provided a critique of autobiography, its stately proleptic chronologies. Giorgio Agamben’s calling of criticism: “the reduction of works to the sphere of pure gesture.”) Thus, randomly:

My skin is too delicate, a woman’s skin (later on I always got blisters after having held by sabre for an hour); the least thing takes the skin off my fingers, which are very good; in a word, the surface of my body is that of a woman. Hence maybe an insurmountable revulsion for whatever looks dirty, or damp, or blackish in colour.

The difficulty, my profound regret at describing things badly and so spoiling a heavenly memory in which the subject surpasses the teller makes writing genuinely painful for me rather than a pleasure. Later on, I may very well not describe at all my crossing of the Mont Saint-Bernard with the army of reserve (16 to 18 May 1800) and my stay in Milan in the casa Castelbarco or the casa Bovara. 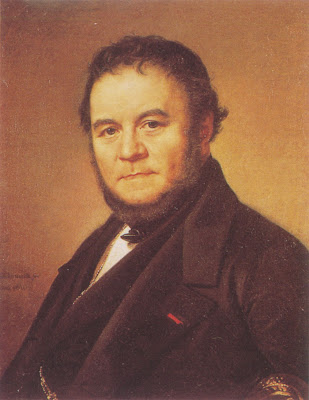