Flagging diligence. One raging part of me says: “To the streets.” I doubt anybody’d overly tout the nuance of my political thinking, but the late diplomatic documents verifying what one’s suspect’d all along—that the U.S. government routinely and regularly, with compleat dog-grinning cynicism, lies to its citizens—and the tepidity of that citizenry’s response to the news: one festers, roars, splutters out a “It’s fucking inconceivable . . .” whilst it’s all too “conceivable”—it’s rampant and systematic. Reading, pugnaciously insomniac late into the night, I encounter’d a brief paragraph in Steve Katz’s new and autobiographical Time’s Wallet (Counterpath, 2011)—he’s careening around with one Leo Garen, director of LeRoi Jones’s The Slave and The Toilet now making movies, trying to muck together a script for a film call’d Grasslands, the story of a “wandering pack of misfits, like an Ur-motorcycle gang” dodging around the Nebraska prairies in 1919:

Once we visited an old guy in Hoboken, who was an expert on vintage motorcycles. He had a complete manual for and expert knowledge of the 1919 Indian, among other bike info. His small parrot hopped around the apartment, landed on the table, and said over and over, “Government bullshit.”

“Government bullshit.” Too benign for the present. (And I recall a sunburn’d man with a large green parrot ambling up to a yard sale we had some years back. Man says to the parrot, “Goddamn.” And the parrot, repeating, with impeccable pauses, each pregnant with the faint gist that he’d quit: “Goddamn.”       “Goddamn.”       “Goddamn.” The sunburn’d man claim’d he’d relaid the flooring in the house, that a murder’d occurred there, and blood’d stain’d the boards. I nodded, narrow’d my eyes in fiercely ambivalent seriousness. A neighbor’d told a story of an early morning stake-out and raid, amphetamines or something. A shot of nervousness a few years later when we pull’d up the rugs: old carpentry throughout, unstain’d and unbreach’d. “Goddamn.”)

Leaving one pawing momentous at the snow-involucre’d air. If one rejects the usual, what next? Some writing call’d “To a Painting” “about” a piece by John La Farge that Roger Shattuck writes about somewhere, detailing “how Vasari or Apollinaire would have begun La Farge’s story”:

By heritage and education—he was bilingual in French—La Farge should have become a diplomat. One strong aversion blocked that career: He hated to shake hands. To stand in a receiving line at an official reception would have exceeded his physical capacities. Fairly early, he found that he could resolve at the same time his handshaking problem and his choice of profession. As a painter, he could greet his guests with both hands occupied—brush in one, palette in the other, or perhaps a rag. . . .

He study’d law in New York, painting in Paris with Thomas Couture and Jean-François Millet, and met Henry and William James as fellow art students in Newport. (“The brothers from Boston were enormously impressed by La Farge’s powers as a conversationalist . . . He spoke in long, digressive, yet well-formed sentences that displayed wide knowledge and an adventuresome intelligence. Henry James called La Farge ‘quite the most interesting person we knew.’”) Close friend of Henry Adams, La Farge travel’d with him for three months in Japan following the suicide of Adams’s wife. Later the two spent a year or so in the South Sea Islands, “particularly on unspoiled Samoa,” living with the natives. Left Tahiti just a week prior to Gauguin’s arrival. The painting’s call’d “Hillside, Long Island”—paint’d in the early 1860s—and recalls Francisco Goya’s “Dog” (c.1820) The low angle, the mischief / terror of concealment. The marvelously scrutable majesty of depth in the brushwork, over-smudge and vagrancy. Patches that seem to absorb one’s looking, exfoliating into a skein of possibles. (Steve Katz speaks of breaking pieces off “the insurmountable falaise of memory”: “I free some piece into its own form and there is a scintillation, a sparking of energy on the face of the language stretched across the page . . . a glow of significance, a presence.” He talks about what’s call’d “the clark”—a quarry workers’ term: “When they cracked, split, and separated the large block into halves there was, on the surfaces formerly fused, a glow, an electrostatic scintillation across the new exposed faces.”) Leaving one pawing the moments, and uselessly, at the involucre’d air . . . 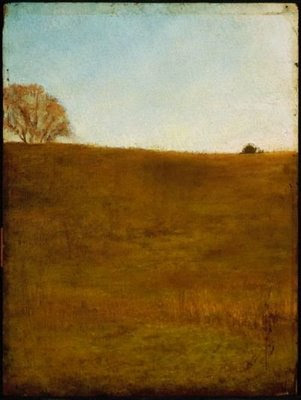 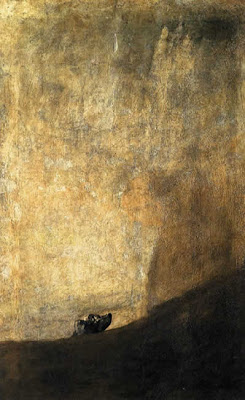