Steve Katz’s Time’s Wallet (Counterpath, 2011) pulls a subtitle along behind: “Volume 1 / 54 memoirrhoids out of 137.” And, sure enough, it contains fifty-four shortish chapters, arranged alphabetically—“Arunchala in India,” “Babbadoodoo,” “Baxter,” “Belgrade Whoops,” “The Berryman Blot,” “Big Flub,” &c.—chapters offer’d mostly without date-stamp: a slurry’d concatenation of nodal swellings. The number 137 is explain’d in the final chapter (“137.x”) thus:

Perhaps because physicists call it God’s number I’ve set my ambition at producing one hundred and thirty-seven of these memoirrhoids. The number is large enough that it might force me to open some doors I didn’t intent to. . . . It’s called the Fine Structure Constant, or α (alpha). The number is mysterious because it isn’t the product of measurement, as is Pi or Planck’s constant. It’s just a prime asserting itself. . . . Somehow it figures in all transactions between light and matter. 1 / 137, for instance, is the probability that a photon will be absorbed by electrons. In natural sequences that arrange themselves according to the Fibonacci series, like the whorl of the sunflower, or the conch or snail shell, the angle between one level and another is usually 137°. I don’t know how to read this in the language of mathematics or physics, but it pleases me to infer from this that there is always part of what we look at that is ineluctable. This accounts for the darkness in everything manifest. It insures the imperfect that is our paradise.

I love that “just a prime asserting itself.” Recalling somehow Friedrich Schlegel’s dictum that the perfect writing’s both “wholly intentional and wholly instinctive.” Katz’s long exhibit’d a numerological tendency: I recall him reading, in Ithaca, a story call’d “Parcel of Wrists” wherein the narrator receives a brown-paper containing forty-three wrists mail’d, according to the postmark, out of the seemingly nonexistent town of Irondale, Tennessee. (One can look up the story in Katz’s 1992 collection call’d 43 Fictions and read how the wrist recipient wheels a yellow Mustang along Tennessee roads looking for Irondale—“To get to Iron City you take Route 431 out of Nashville to Franklin, where you get Route 31. Take Route 31 to Columbia until Route 43, which you take to St. Joseph, and from St. Joseph you take an unmarked dirt road to Iron City.” I recall the story concluding with a magnificent “cosmic” gesture, though, rereading it now, I see a little echo of Frost (“that could have made all the difference”) and a something like a shrug—“If I had done that my life might have worked itself out by an entirely other set of priorities”—likely a measure of the way time’s money’s got spent out of my back pocket, too.)

Katz’s pieces (the memoirrhoids)—inhabit’d with the likes of Vladimir Nabokov, Richard Serra, Steve Reich, Rudy Wurlitzer, Ed Dorn, Baxter Hathaway, Ron Sukenick, &c., with Thomas Pynchon and Kurt Vonnegut, among countless others, dashing (should one say vestigially?) through—mimic memory’s common form: a kind of uncall’d-for (though retrievable by means of epithet, see Homer) erupting, a presence body’d, palpable, whole. So that repetitions become a necessary parcel of any whole (the kind of thing that’s stripped away in a conventional autobiography with its imposition of chronology): here, for example, one learns on several occasions that Katz’s former wife, Jingle, achieved the moniker by being born a Bell (and, oddly enough, that Katz, being a city kid sent off to a Catskills farm one summer years prior to meeting her, a particular fondness for a cow named Jingle). No matter, context each ref pertinent and different: the old story told drunk surround’d by drunks is not the story breathed out lazily between sheets. Katz (on how “the act of writing erases its own moment”):

Moment gather ias if on a platter of offering. This book is a presentation of narrative snacks . . . that disappear as I consume them by writing them away. The past can be tasted only in the onward rush of the present. I’ve written a lot of them so far, and sometimes fear I am writing the same memoirrhoids over and over. My memory of what I have done so far is imperfect. But memory is never a perfectible mode. It is no disaster if I write something twice. Even J. S. Bach did that. Contradictions can only be enriching.

And, too, with the ache of time’s brute velocity, writing’s mercurial registry:

I speak to the individual with whom I speak though there is none, but this protospecific continuum of potential but never realized manifestations, so much like myself aching for time. It’s from this place, though to call it a “place” is overreaching and understating the condition, but it is from let us call it “here” that I transmit the dispatches that I call Memoirrhoids, formed of this dust that presents as light, in order to broadcast the notion that there is a modality to be called life, and that life can be mine, lived with some intensity and confusion, and I hereby smack open the illusion that some of this is real. I offer Memoirrhoids as token of existence. Once I have discharged 137 of these, if 137 is possible, the agreement is that I shall be released.

(Katz’s wry pragmatism secure. I recall in the 1973 Cheyenne River Wild Track, a kind of bare-bones novel of making a film in Sioux country along the Cheyenne River, the clip’d affirmation of “it is written / that Crow Dog’s Paradise / locates wherever Crow-Dog / happens to be.”)

Beyond the brilliant exigencies of form, Katz’s stories, too, “present,” wonderfully lit. There’s visiting the ashram of Ramana Maharshi (model for the guru in Maugham’s The Razor’s Edge) with Rudy Wurlitzer, and being tail’d by a disciple who’s “like the rip tide of rupees”; there’s fetching the completely slosh’d John Berryman at the Ithaca airport for a reading (“He had pissed himself in flight . . . his expression was that of a frightened POW”); there’s Ed Sanders reaching the self-limitations of hip at Peace Eye Bookstore (“He looked at my copy of The Exagggerations of Peter Prince with a mixture of confusion and contempt”); there’s visiting George Schneeman in Rencine, Italy (“A kid, maybe three years old, barefoot, in tattered shirt and pants, arrived to stare at me. ‘Un Ameri(h)ano an(h)orra,’ he aspirated the c’s like a good Tuscan. ‘Dio senza (h)ulo.’ Translated roughly that means, ‘Another American, God without an asshole’”); there’s Richard Serra running “yowling down the beach,” hand smash’d by the door of a “heavy old cast-iron cook-stove” that Katz is moving to some land he’s bought on the western shore of Cape Breton Island (after transporting it some fourteen miles along the seacoast in a fourteen-foot aluminum boat with a “twenty horse power Evinrude outboard”). And, comme on dit, many, many more. Parcels of stories: rueful, funny, incisive, mordant, dispatch’d with wit and style. 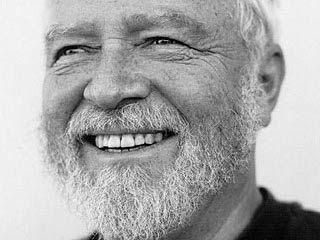