And colder, five degrees F. Still’d crows blacking the branches. One reads how the West Nile virus, rampant amongst New York City crows a decade back, lost its virulence moving west: “a crow in a diverse habitat is less likely to come down with the disease than a crow in a species-poor area.” Implying that, “a diverse ecosystem is more capable of mitigating a pathogen’s effects on highly-sensitive species.” Like a poet who reads inconsistently, flightedly, yea, rapturously, beyond the inevitably proscribed bounds of “the cohort”? (Two crows flaps off ungainly, impercipient, torn paper lift’d by a valedictory wind.) (What one desires is to mean “anew” with every word one utters.) What caught my morning attention: Michael Palmer’s note in “The Danish Notebook” that reads, “Robert Smithson’s idea of ‘a surd map,’ that is, a map without a central logic.” A writing of grand vacillatory vocables, un-nuanced. A writing with massive, ineluctable and sudden shifts of temporal (or spatial: the lid of the matchbox lying out in the Atacama sand) scale. (One thinks of Flaubert’s sixteen year gap limn’d with ballsy restraint in the 1869 L’Éducation sentimentale—

He traveled.
He came to know the melancholy of the steamboat, the cold awakening in the tent, the tedium of landscapes and ruins, the bitterness of interrupted friendships.

—how it’s somehow reprised by Toni Morrison in the 1973 Sula with Sula’s return after a ten-year absence to the Bottom, “accompanied by a plague of robins . . . little yam-breasted shuddery birds.”) Gaps and shudders. Suspending oneself up above some voluntary abyss: trying to “make use” of the most wanton disparity. How’s it go in Wittgenstein’s Philosophical Investigations? That splendid fail’d retreat out of “actual language” (the point where one seeks “something pure and clear-cut”—or “falls” to grunting inconsolably, mouthing pig-syllables)? Wittgenstein:

We have got onto slippery ice where there is no friction and so in a certain sense the conditions are ideal; but also, just because of that, we are unable to walk. We want to walk: so we need friction. Back to the rough ground!

That is to say: in language, any map is “surd.” One walks not with some propositional idea of language, complete with “legend,” but with the clumsy mouthfuls of dirt we deposit here and there, markers of some use without legitimacy or preconceit. Hunh? Or we fall in heaps. Not out of the pitch’d glissando of clarity (clarity’s a major beef): out of the irreducible vacuity of the crowd’d field, the lingo hump’d up inexplicably, the beaver’d terrain. No better. Reading Agamben’s The Man Without Content, how he opposes the consumatory innocence, aesthetic distance, of the spectator of art in front of the beautiful object (quoting Nietzsche quoting Kant’s “That is beautiful . . . which gives us pleasure without interest” against Stendhal’s blunt rejecting of “le désinteressement by calling “the beautiful une promesse de bonheur,” a promise requiring activity and pursuit) to the “increasingly uncanny experience” of the maker of art (quoting Artaud, in The Theater and Its Double: “To our inert and disinterested idea of art an authentic culture opposes a violently egoist and magical, i.e., interested idea.”) Agamben:

For the one who creates it, art becomes an increasingly uncanny experience, with respect to which speaking of interest is at the very least a euphemism, because what is at stake seems to be not in any way the production of a beautiful work but instead the life and death of the author, or at least his or her spiritual health. To the increasing innocence of the spectator’s experience in front of the beautiful object corresponds the increasing danger inherent in the artist’s experience, for whom art’s promesse de bonheur becomes the poison that contaminates and destroys his existence. The idea that extreme risk is implicit in the artist’s activity begins to gain currency, almost as though—so thought Baudelaire—it were a sort of duel to the death “où l’artiste crie de frayeur avant d’être vaincu” (“where the artist cries out in fright before being defeated”); and to prove how little this idea is merely one metaphor among those forming the “properties” of the “literary histrio,” it suffices to quote what Hölderlin wrote on the brink of madness: “I fear that I might end like the old Tantalus who received more from the Gods than he could take,” and “I may say that Apollo struck me.” Or the note found in Van Gogh’s pocket on the day of his death: “Well, as for my own work, I risk my life in it and my sanity has already half melted away in it.” Or Rilke, in a letter to Clara Rilke: “Works of art are always the product of a risk one has run, of an experience taken to its extreme limit, to the point where man can no longer go on.”

I love that note regarding the “literary histrio.” What I see being a kind of supposed rapturous histrionic, the madness of the poet, &c. Rubbish’d by the pseudo-scientism of Language writing and the mechanickals of Conceptualism alike. Reading Agamben’s assemblage of limit-quotes, though, one sees how perfectly Jack Spicer’s “My vocabulary did this to me . . .” fits the rubric. Or even O’Hara’s final “Oedipus Rex” note: “He falls; but even in falling / he is higher than those who / fly into the ordinary sun.” (What one desires is to mean “anew” with every word one pulls out of one’s hat, or scours off and recovers . . .) Smithson’s idea of “taking of a discarded system and using it . . . as a kind of armature”:

I always had this urge toward all this civilized refuse around . . . I remember I was impressed by Nabokov, who says that the future is the obsolete in reverse. I became more and more interested in the stratifications and the layerings. I think it had something to do with the way crystals build up too. I did a series of pieces called Stratas. . . . I thought of writing more as material to sort of put together than as a kind of analytic searchlight, you know . . . 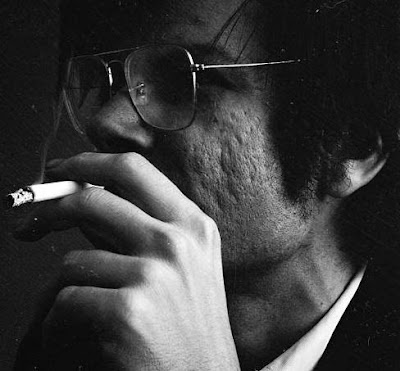