Jack Tworkov’s The Extreme of the Middle

Jack Tworkov: “I don’t try to accumulate the picture bit by bit—like pennies in a piggy bank.” And, in a c. 1959 note, out of The Extreme of the Middle: Writings of Jack Tworkov, edit’d by Mira Schor (Yale University Press, 2009):

I have practically no need for esthetic experience, for the worship of beauty or the nuances of fine feeling. I envy the real world, the world in which real things are made. I mourn the fact that I am a stranger to real voyages, to factories, to the modern mysteries of machines, science and mathematics, warfare, all the things that make the world, hard, deep, impenetrable, and as a matter of fact, cruel. I am a foreigner to all these enormous energies.
My painting represents me in my chagrin, my alienation, my laziness, my impotence. To have to paint with a brush instead of with horsepower. The world of the ordinary man expands with the speed of light. Every schoolboy travels in space. The painter’s fate deals with square feet. No wonder we are a vanishing race.

Weighing Tworkov’s mots in my sleeplessness. That untrammel’d sense of the picayune, the futility of art—how terribly limit’d its means and effects when opposed to the shrillness of the claims made on its behalf. Tworkov, too, insistent in a belief that richness lies in the overlap, the point of commingling, systems interfering with systems (“walking the hedge-row” in the ornithologist’s lingo, or “torn between the calligraphic and the structural”) and adamantly opposed to the way personality itself’s become a commodity in the arts (“If one wants to preserve integrity one must hide ones personality behind a bushel”). How refreshing Tworkov’s plain sense of trying to make an art uncorrupt’d and honest. He writes (in a journal begun 21 January 1947 with the astoundingly self-possess’d line: “Style is the effect of pressure”):

(Directly applicable in the current “era” of whole-hog borrowings: is that appropriating of court-records or Google-voices a cheap substitute for some lack, something unavail’d out of limit’d means or eschew’d for its paltry? Or is the material allow’d its ownness?) (Tworkov extends integrity to a realm he calls “spiritual”: “To regard phenomena only in the light of what they contribute to the evolution of a happy mankind. . . . Implicit is the belief that life itself is the chief good—that man is an end and not a means.”)

Tworkov’s quietly refuting of the heroicks of art (in the midst of American art’s “heroic age”—see Life magazine’s four-page document (8 August 1949) pointing to Jackson Pollock, and asking: “Is He the Greatest Living Painter in the United States?”): Journal entry of 24 October 1951 (beginning with the extraordinary question: “Did it ever occur to Sophocles to write a play about himself?”):

Everyone who is an artist does it at the expense of being a hero. When the artist conceives himself a hero, he ceases to be an artist and proceeds to destroy himself. . . .

I like Tworkov’s sense of testing the “original impulse”—painting, opposed to constructing, or accumulating “bit by bit,” lines that follow the opening sentence:

Whenever in the course of the painting the picture arrives at some concept I submit it to random unrelated activity, to chance, to the opposite of itself. I submit the picture to a bettering and if something of the original impulse survives all that, then it stands. Often all I’ve got out of months of painting is what one would salvage from a shipwreck. Not perfection but the nearly inevitable consequence of having preferred a certain kind of action to another. . . .
Why all that? Out of less than satisfaction with one’s self, to spring open the limits of self. . . . To get out. The opposite of integration—to break open and out. 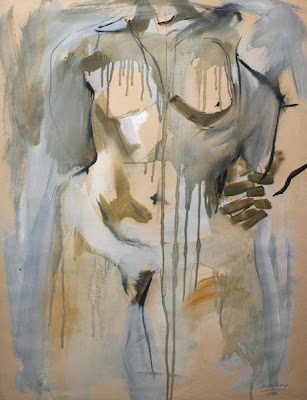 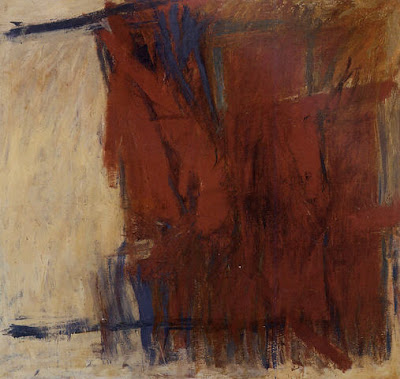 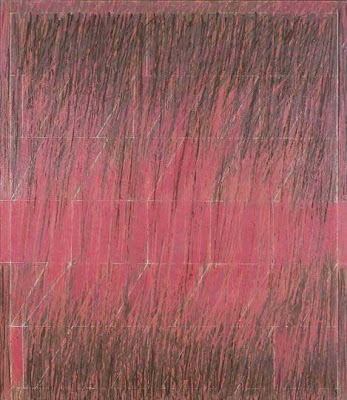 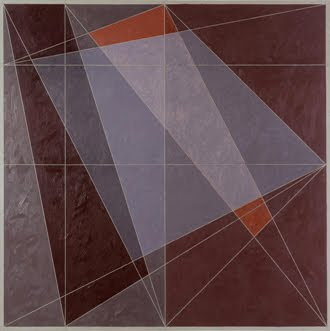 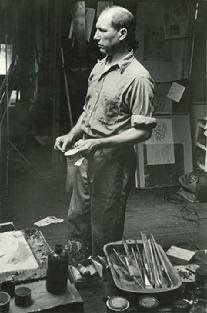 Jack Tworkov, 1900-1982
(Photograph by Rudy Burckhardt)
“My hope is to confront the picture without a ready technique or prepared attitude—a condition which is nevertheless never completely attainable; to have no program and, necessarily then, no preconceived style. To paint no Tworkovs.” Journal, 3 March 1958

Morton Feldman and John Cage play’d a lot
of cards in the period Cage conduct’d a
Model A Ford to Fulton Street to meet
Robert Rauschenberg. Feldman call’d Philip Guston the arch
crank. History’s peril is the way it gets
stuck in its terms: a “strange simplicity” dogs
it, like a note stretch’d beyond a measure,
or the foot of a sleeper hack’d off
to fit a Procrustean bed. Jack Tworkov says
Diane Di Prima (c. 1960) try’d to look
prim and severe and nonchalant pronouncing the words
cunt and fuck and shit. Is history’s fuck
everywhere its own equivalent, sprawl’d on a standard
mattress like the continual music of a century’s
worth of B flats, each indistinguishable? Or is
it like a color apply’d by two contending
painters, Picasso’s blue is not Pollock’s. The mock-
heroic Pollock who claim’d “insecurity is crucial to
painting” and pour’d humility’s black offal out of
an enormous hollow’d fist, mud and sand humping
up the work he stood within, never “so
attuned to process he mistook it for life.”