With William Wylie’s Route 36 (Flood Editions, 2010), Devin Johnston and Michael O’Leary up the Flood Editions ante by offering a book of photographs—impeccably design’d, richly print’d, with a compendium of endlessly examinable pleasures, stark and sleek and—like the ubiquitous cottonwood of the Kansas prairies, with its adz-handle thick rivulets of bark—repeatable. 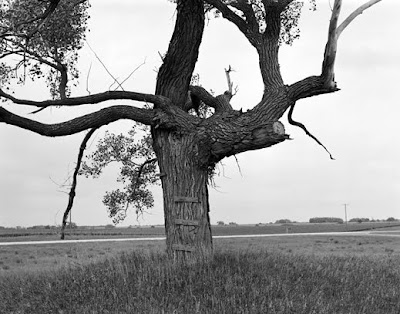 Merrill Gilfillan provides a foreword, terse and prophetic, noting the road’s “insouciant, ‘There but for the grace of God,’ shunpike bearing”:

Route 36 remains one of the more dignified means of crossing the mid-continent. The stretch from Last Chance, Colorado, almost to St. Joseph, Missouri, is an unfettered, open enough artery to finally attain the rhythm and syntax of, say, a river. But it is, of course, a line, a human beeline with daffodils and homefries, laughter and subtle wreckage at its edges.

Route 36 runs along the northern border of Kansas, missing the geographical center of the coterminous states near Lebanon, Kansas by a mere couple of miles. (Wylie: “A small park, obelisk, and defunct hotel mark the location. In homage I liked to climb up on the eight-foot-tall monument and survey the cornfield for miles around.”) According to Gilfillan, the usual “aggressive hucksterism” of the American road’s slunk off south to harry the newer throughway, Route 70, leaving the old route a place where one might “drive an intelligent mile”:

Those high plains, the côtes above the would-be river, remain a classical locus for vast exhalation and contemplative sway: the impeccable straightaways and the hawks overhead. The prairie cottonwoods, many times the wildest creatures in sight, carry the ensign of vertical life: twisted and tongue-tied, both blind and curious, always with the appearance of trying to pull up roots and hobble away. Even the dullest reaches of merciless corporate agriculture can be put to good use sizing the cloud realm, or practicing bird sounds at the wheel, in the grand tradition of Li Po’s “One of us calls out in partridge song.”

So, through some few summers, Wylie travels across the roughly 375 miles—through Home, Kansas and Joes, Colorado, and other Kansan towns—Blakeman, Axtell, Bird City, Stuttgart, McDonald, Beattie, Agra, St. Francis: “I stopped in every town along the route to see Main Street, sample homemade café pies, and visit the silos. Back out on the highway I’d stop and walk a mile or so along each accessible creek or river. One late afternoon on Sappa Creek near Oberlin I heard the calls of migrating cranes and looked up to see hundreds of them slowly circling high overhead.” There’s a lovely sense of fulsome abandonment to the photographs: one longs to enter the works to soak up a kind of plenitude of disuse. To stand a while in full prairie light utterly reft of humankind (though its traces remain, its feints and wrecks, the telephone pole, the boards nail’d to the tree). One thinks: here the light hitting a silo’s corrugated Quonset ridges resembles a Paul Strand, 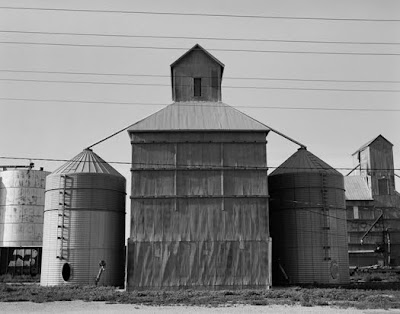 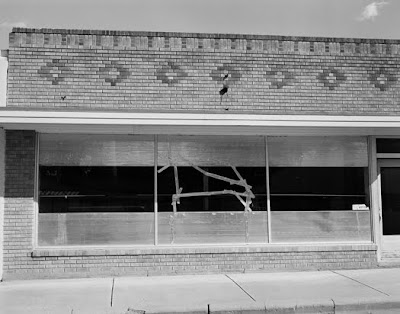 or here a row of scraggly trees stretch’d out along a horizon, each attended by a black Angus and a black shadow (the two merging) nods at works by Art Sinsabaugh, minus the elongating panoramic-style cropping. Not a “wrong” approach, though one rather limit’d by its fetish for lineage. One that disallows the blunt affection evidenced here for the way the solitary human story asserts itself: who nail’d up the boards, who so exiguously apply’d the tape to that storefront window? 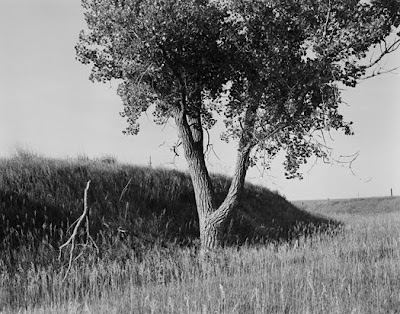 Some sense of that happy miasma one’s caught in in the photographs—between the roaring of something like high-frequency continental amplitude and the sudden niggle of a brief and tawdry human moment, found perhaps in Wylie’s remark that “I recall one July day in Marysville they were playing Christmas carols while the bank sign flashed 105 degrees. With no one in sight, this felt strangely apocalyptic.” And: “Walking the hills on a hot summer day, with grasshoppers flying in every direction and a thunderhead building on the horizon, my experience of time became at once more immediate and more vast. And the rare possibility of finding a rusted Gooch’s Feed sign on the back of an abandoned grain silo was pure archeology to me.” (Rather like O’Hara’s pronouncement: “I can’t even enjoy a blade of grass unless I know there’s a subway handy, or a record store or some other sign that people do not totally regret life.”)

If one thinks of Flood Editions—and one inevitably does—as modeling itself largely along the excellent terms and standards of Jonathan Williams’s Jargon Society, one’d align Wylie’s book with Jargon’s 1964 Six Mid-American Chants, combining Sherwood Anderson’s “chants” with Sinsabaugh’s giant “banquet” camera prints—made off 12 x 20-inch negatives—of Midwestern landscapes. Less lavish, lavish enough. (Wylie’s photograph here compare poorly with the book’s prints, the blacks blacker, leaf and grass and other details sharper, a nigh-tangible morass to plunge into.) I think, too, looking through Route 36 of Flood’s “history” with Kansas, how it pounced forth fully-made with Ronald Johnson’s The Shrubberies. Ashland, Kansas, is south, close up to the Oklahoma border (I check’d a map). I pull’d Johnson’s ARK off the shelf, and it fell open to Kansas, mid-book, apt:

Line up all around the block, inscribe
dry red Kansas, country empty, even ‘Great American Desert’
no mapped puddle skipped a pebble, but Flood,
Flood parted ahead, let stack up time,
fast blood put out to pasture
our large argosy:

food head to foot for acrobat thought
bounce planed planned plank
handstand more split images than you could shake a stick at
‘step it up a round’
vast curtain drawn, in the wings
transparent corner cut as old as dance itself,

as if body twirled by a finger, prowess
such as seed put earth tap out tumultuous sun ‘succeed’, who
land upright, incarnate
inaccurate curves rebounded, redoubled errand
tombed solely new
simply of everything else.

And, later: “Upon the very leaves veined time writ large.” A kind of epigraph for Wylie’s Kansas photographs. 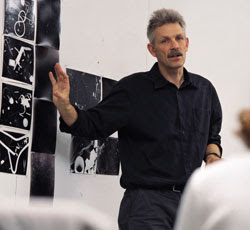