Terminal mugginess, mosquito-bother’d air, my dilatory ways. The dog drags itself through the streets, “looking for a mongrel bitch.” “I am so sorry but really I do not feel a bit like an examination paper in philosophy today.” (Or: “A private life is the long thick tree and the private life is the life for me.”) How is it that the little impenetrables line up so rippingly? The way, say, that Delacroix’s 1 March 1831 lines to the editor of L’Artiste—

Sir, talent does not submit. It delights in difficulties, but only in those it has itself chosen. Talent is like a mettlesome steed that will not offer its back to the casual rider, and refuses to fight save under the master that it loves. Not that talent lets itself by carried away by its own caprice without due choice and restraint; not that it shuns the yoke of reason; proportion and reason are, in a word, the essence of all that talent produces when it is truly inspired; but it needs that inspiration, and it can no longer be held responsible for what it may produce when that is lacking . . .

—nudges up against the environs of Kenneth Koch’s (out of “Ko, or A Season on Earth”) Byronesqueries (deuxième canto):

Past the campo santo,
The drugstore, and the county airport, in
Great haste the milkman rides, begins to pant, “Oh,
How shall I ever paint in time to win
The bottle picture contest, which, it’s true,
Is sponsored by the Cincinnati Zoo,

A corollary of the summer opera
And much more modern. . . .” What strange man is this?
You talk to him, and meanwhile I will pop a-
Round in the back and see what images
Upon the glass containers’ sides in tempera
Or oil or water color he with bliss
Of inspiration that he might win fame
Has etched. Look here! They’re lovely, all the same!

Delacroix is resisting “the necessity of submitting to the ruthless sifting of a public competition, of being lined up in front of an audience like a troop of gladiators, vying with one another for its impertinent approval and reveling in mutual slaughter in the arena.” (One complaint: “In a competition, natural charm appears insipid when set beside the contortions of a rhetorical talent; true audacity seems exaggeration, beside some narrow and unimaginative production . . .”) Is Koch suddenly nosing into muggy consciousness out of my perusal of some pages of the Josh Schneiderman edit’d “this pertains to me which means to me you”: The Correspondence of Kenneth Koch & Frank O’Hara, 1955-1956? (The title is that of a “typescript packet” of poems O’Hara present’d to Koch following O’Hara’s apparently rather difficult and unproductive playwright-in-residence stint at the Poets Theatre in Cambridge during the early months of 1956.) Schneiderman provides a detail’d and canny introduction to the letters, focusing on O’Hara’s various retorts, print’d and unprint’d, to Harry Roskolenko’s damning dismissal (“Mr. Koch, it seems, has a rare combination of words rattling about in this skull, but it is difficult to call any of his word combinations the bric-a-brac of poetry. He is precious and puerile . . .”) of Koch’s 1953 Poems in the pages of Poetry. And, too, on how the episode likely fired Koch’s early Dunciad, the satirical screed “Fresh Air” (“Where are young poets in America, they are trembling in publishing houses and universities, / Above all they are trembling in universities, they are bathing the library steps with their spit, / They are gargling out innocuous (to whom?) poems about maple trees and their children, / Sometimes they brave a subject like the Villa d’Este or a lighthouse in Rhode Island, / Oh what worms they are! they wish to perfect their form.”) and how O’Hara’s push and encouragement (“It does seem a shame not to have those poems in the public domain, don’t you think? And I think where [“Fresh Air”] might be lost, as we discussed in ; [John Bernard Myer’s Semi-Colon] or [Daisy Aldan’s] Folder, it who be okay here, since they have presented people like Agee, Goodman, Tillich . . . And if you didn’t have lots of pearls I wouldn’t suggest that you cast some.”) led to the piece’s printing the Cambridge magazine, i. e. (Schneiderman calls it “a powder keg of a magazine.”) The i. e. issue (including work, too, by O’Hara, and Ashbery, along with drawings by Jackson Pollock, “who had died a few months earlier and was probably at the height of fame”) mark’d a kind of New York School inaugural: “As a result of O’Hara’s intercession, the three poets were featured together as a group in publication outside of New York . . .” One measure of the fun in the letters: O’Hara’s epistolary japes, parodying various editors (one purporting to be by “Henry Rago, Editor, Poetry” wonderfully ends, “Please send us any minor little bagatelle you have which you are not embarrassed to see printed in our wretched but earnest little sheet.”) Here’s one:

Dear Kenneth Koch,
It gives me a modicum of pleasure to join in the almost universal praise being rather heaped upon your lovely lyric THE HISTORY OF JAZZ. I commend your industry in assaying this ungovernable and perhaps partially unrewarding subject, which to my knowledge has been hitherto neglected by our authors. I was fortunate enough to know Madeleine Reierbacher intimately (how well I remember our four teas together that last summer in St. Louis!), and it gave me a deep and spontaneous feeling of warmth, not entirely unmixed with diffidence as must our tenderest areas so often be, to fine her justly celebrated in your little ode. In discussing your poem with my dear friend Justice Douglas during his recent visit to London, I did not point out to him your graceful reference to Menander (part 2, line 7) for fear that it would put him “off” in these days of ardent national concern. He was delighted, and a friendly senator will read it into the Congressional Record when he returns to the States. At that time perhaps a footnote would be helpful? Of course, I shall await your discretion on the matter and meanwhile, may I assure you, the pleasure which this poem has given me is of such vividness that I rather think I shall not have to read it again.
Yours in the polite remembrance of shared pleasures,
/ s / T. S. Eliot
Helmsford-on-Hemp, Hants. G. B.

Naturally, “Madeleine Reierbacher” exists only as “the horn-playing protagonist of Koch’s ‘The History of Jazz.’” The seventh line of the second part of the poem is, “Here and there a red chalk line interlaced with the others.” The Greek dramatist Menander (ca. 342–291 BC), routine prize-winner at the festival of Lenaia, competed with the more popular Philemon, and, according to Attic Nights compiler Aulus Gellius, used to ask Philemon: “Don’t you feel ashamed whenever you gain a victory over me?” Ah, for such forthright braggadocio! One of the most frequent insults used by Menander is skatophagos (σκατοϕάγος), literally “shit-eater.” He is, too, apparently at the origin of the Latin Alea iacta est, “the die is toss’d.” 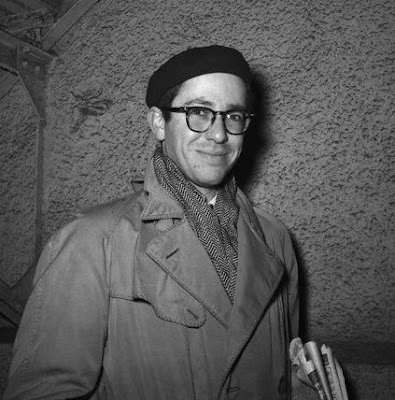 Kenneth Koch, c. 1958
O’Hara: “You are rather like the divine Guillaume, you know, so big and tall and always in uniform.” And Josh Schneiderman notes: “In reference to Koch’s style of dress in the late 1950s, Larry Rivers writes, ‘Kenneth considered my costume hopeless alongside his own wardrobe, which lock, stock, sock, and jock came off the rack at Brooks Brothers.’”