Somewhere in Roberto Bolaño’s 1976 “first infrarealist manifesto” call’d “GIVE IT ALL UP AGAIN” (translated here by Tim Pilcher) the somewhat contradictory line (every good manifesto demands exposure within itself of the very implements of its own subverting in order to avoid the anyways-inevitable “process of individual musemification”), the line: “Rimbaud, come home!” Thinking of Bolaño’s Rimbaud (isn’t the “savage” of The Savage Detectives lift’d straight up out of Rimbaud’s line—ending the prose poem titled “Parade”—J’ai seul la clé de cette parade sauvage, roughly, “Only I hold the key to the savage sideshow”?) whilst reading of the Bolaño sidekick and doppelgänger Arturo Belano “lost in Africa,” in a village “forsaken by god and abandoned by the human race,” an African village “whose inhabitants have all fled or been killed” (Belano is “looking up at the sky through which three clouds are floating, like three signs in a blue field, the field of conjectures or the field of mystical doctrines, amazed by the elegance of the clouds and their unspeakably slow procession”—the whole story is construct’d of a single sentence, one dips into and out of it volontiers, that is to say—the manifesto again—“Tenderness is an exercise in speed.”) What Arturo Belano is doing (between cloud-conjectures):

. . . leafing through a sort of photo album in which Francophone poetry celebrates itself, sons of bitches, he thinks, sitting on the ground, a ground of red clay, or something like that, but it’s not clay, not even clayey, though it is red, or rather coppery in color, or reddish, except at midday when it’s yellow, the book lying between his legs, a fat book, nine hundred and thirty pages, so close enough to a thousand pages long, a hardback, La poésie contemporaine de langue française depuis 1945, edited by Serge Brindeau, published by Bordas, a compendium of little texts about all the poets writing in French around the world, be it in France or Belgium, Canada or North Africa, sub-Saharan Africa or the Middle East . . .

That’s in the story titled “Photos” in Bolaño’s The Return (New Directions, 2010), translated by Chris Andrews. There’s something terribly sorry and right about the way Belano truckles through the pages of the book, naming and noting, examining the author photos, collecting, judging, voraciously flirting and savagely dismissing, la poésie itself nowhere in evidence:

. . . here we have Patrice Cauda, who looks like he hits his wife—what am I saying, his wife, I mean his girlfriend—and Jean Dubacq, who looks like he works in a bank, like a sad bank clerk whit little hope left, a Catholic, and Jacques Arnold, who looks like the manager of the bank that employs the unfortunate Dubacq, and Janine Mitaud, large mouth, sparkling eyes, a middle-aged woman with short hair, a slim neck and, to judge from her expression, a subtle sense of humor, and Philippe Jaccottet (whom he has read), who’s thin and has a kind-looking face, though maybe, thinks Belano, it’s one of those kind-looking faces you should never trust, and Claude de Burine, the incarnation of Little Orphan Annie—even her dress, or what the photo shows of her dress, is identical to Little Orphan Annie’s—but how is this Claude de Burine, Belano asks himself aloud . . . Claude de Burine, he reads, was born in Saint-Léger-des Vignes (Nièvre), in 1931, and she is the author of Lettres à l’enfance (Rougerie, 1957), La Gardienne (Le soleil dans la tête—good name for a publishing house—1960), L’allumeur de réverbères (Rougerie, 1963) and Hanches (Librairie Saint-Germain-des-Près, 1969), and that’s all the biographical information there is, as if at the age of thirty-eight, after the publication of Hanches, Little Orphan Annie had disappeared, although the author of the introductory note says: Claude de Burine, avant toute autre chose, dit l’amour, l’amour inépuisable, and when Belano reads that, it all makes sense in his overheated brain: someone who dit l’amour could perfectly well disappear at the age of thirty-eight, especially, especially if that person is the double of Little Orphan Annie, with the same round eyes, the same hair, the eyebrows of someone who has seen the inside of a foundling hospital, an expression of perplexity and pain, a pain alleviated to some degree by caricature, but it’s pain all the same . . .

Which phrase likely captures something of Bolaño’s quasi-documentary “method”—“La poésie contemporaine de langue française depuis 1945, edited by Serge Brindeau,” exists, naturally, ditto Claude de Burine, (one rather happily finds, too, Bolaño’s mention of “Nicole Brossard, a girl with straight hair, with a part in the middle, big eyes, a square jaw, pretty, . . .”) and its proffer’d details seemingly correspond. Bolano’s engaging in a kind of sociology of a literary moment, the literary moment (one endlessly repeat’d—every anthology is full of Claude de Burine’s, who did, anyhow, continue to write—her Le Pilleur d’Étoiles (Gallimard, 1997) took the Prix Georges Perros in 1998, she died in 2005). In “GIVE IT ALL UP AGAIN”—thinking of documentary sources and the blowback it offers: “The painter adapts to a society that is every day more of a “painter” than he is, and there he finds himself disarmed and registers as a clown.” (To the registry, Flarfists!) And, too, he includes a point’d story:

At two in the morning, after having been at Mara’s house, we (Mario Santiago and some of us) heard laughter coming from the penthouse of a 9-story building. They didn’t stop, they kept laughing and laughing while below we slept propped up in various phone booths. There came a moment when only Mario was still paying attention to the laughter (the penthouse is a gay bar or something and Darío Galicia had told us that it’s always watched by the cops). We made phone calls but our coins turned into water. The laughter continued. After we left that neighborhood Mario told me that actually no one had been laughing, that it was recorded laughter, and up there in that penthouse, some stragglers or maybe a single homosexual had silently listened to that record and made us listen to it.

—The death of the swan, the swan song, the last song of the black swan, is not in the Bolshoi but in the intolerable pain and beauty of the streets.

Ah, art and its daily convulsions. Too, I loved Bolaño’s huge sympathy for the young, the ineffably-stuck-with-the-writerly-curse, those moronic-beatific enough not to covey up, nor to suck up to the bigger, sunnier cloudlets, those remaining behind, darkly scudding with tenuous aim, amassing a terrible, explosive rain . . . Out of “Meeting with Enrique Lihn”:

I’m talking about 1981 or 1982, when I was living like a recluse in a house outside Gerona, with no money and no prospect of ever having any, and literature was a vast minefield occupied by enemies, except for a few classic authors (just a few), and every day I had to walk through that minefield, with only the poems of Archilochus to guide me, and any false move could have been fatal. It’s like that for all young writers. There comes a time when you have no support, not even from friends, forget about mentors, and there’s no one to give you a hand; publication, prizes, and grants are reserved for the others, the ones who said “Yes, sir,” over and over, or those who praised the literary mandarins, a never-ending horde distinguished only by their aptitude for discipline and punishment—nothing escapes them and they forgive nothing.

Up north for a week or ten days. 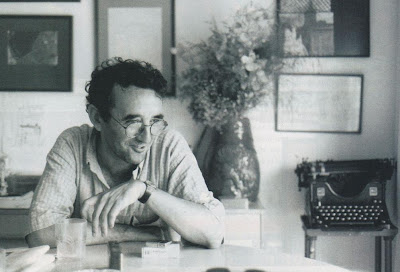