Thalia Field and Abigail Lang’s A Prank of Georges

Thalia Field and Abigail Lang’s A Prank of Georges (Essay Press, 2010) constructs, largely by fooling around with a few well-oil’d and implacably-placed quote-pulleys—one pulley’s securely attach’d to Gertrude Stein’s ineffable cyclings-through of the concomitant grammars of naming (see “What Is English Literature”: “Confusion comes when they confuse what they are saying with the words they are choosing”), one to H. L. Mencken’s book of American “barbarisms” and vernacular roughage (the 1919 volume The American Language, subtitled A Preliminary Inquiry into the Development of English in the United States, with three subsequent editions), others (in loose combo and with completely edifying slippages) pull up (or down) particulars out of Charles Darwin, Walter Benjamin, Bertrand Russell, Sir James George Frazer, Ulla Dydo, &c.—a number of curiously elegant machines. Some titles: “Machine for Predicting Machines,” “Machine for What Counts,” “Machine for Strumming,” “Machine for Spelling-Bee and Fire-Fly,” “Machine for Making Marks,” “Machine for Naming.” Here’s one:

(the legal rule of idem sonans)

“A crude popular etymology,” writes H. L. Mencken in his chapter, Proper Names in America, “often begins to play upon a name that is no longer significant to the many. So the Thurgods have become Thoroughgoods, and the Todenackers have become the Pennsylvania Dutch Toothakers, much as asparagus has become sparrow-grass.”

(the limitations of the Anglo-Saxon pharynx)

Dear Mr. Lindo Webb.
I understand why you are not better liked. A great many people expect you to teach them English. You do so and very well. You might be married and have a wife and son. With these helping you to teach you could teach many more people English.

Then we expect that you will change your place of residence.
We do not expect you to change your coat. No Englishman does.
We understand that.

“Frenchmen and French Canadians who came to New England,” says Schele de Vere, “had to pay for such hospitality as they there received by the sacrifice of their names. The brave Bon Cœur, Captain Marryatt tells us in his Diary, became Mr. Bunker, and gave his name to Bunker’s Hill.”

Young Bonnet.
We have been very much annoyed by the impertinence of Mr. Alfred Bonnet.

In addition to these transliterations, there are constant translations of foreign proper names.
Lang (as the best compromise possible) to Long

(the American antipathy to accented letters)

It is not unusual for some members of a family to translate the patronymic while others leave it unchanged.

Dear Mrs. Carlock.
I do not know the name.

A Frenchman named LeRoi settled in the Mohawk Valley in the early eighteenth century; today his descendants are variously named Leroy, Larraway and King.

Walter Winter,
How do you know my name. I speak thee languages spanish french and english.

(the sheer inability of Americans to pronounce certain Continental consonants)

And so, by one route or another, the Polish Witkiewicz becomes Wilson, the Scandinavian Knutson becomes Newton, the Bohemian Bohumil becomes Godfrey, and the Bohemian Kovár and the Russian Kuznetzov become Smith.

(their disinclination to remember the Continental vowel sounds)

The Belmonts, unable to find a euphonious English equivalent for their German patronymic of Schönberg, chose a French one that Americans could pronounce.

I must try to write the history of Belmonte.

“The family, having rather unwillingly had to change their name to Enroughty to secure an inheritance, balanced up by continuing to pronounce their original name—Darby.”

Caesar isn’t a name that is not used.
I have known that a great many people have it.

And the same ruden would like upon a Hungarian named Beniczkyné, or Gyalui, or Szilagyi, or Vezercsillagok.

Dear Mr. and Mrs. Eaton.
Can you recollect can you remember what day it was that we promised to go into the wind and not take shelter.

Or a Swede named Sjogren, or Leijonhufvud.
Or a Bohemian named Srb, or Hrubka.
Or a Hollander named Zylstra, or Pyp, or Hoogsteen.
Or, for that matter, a German named Kannengiesser, or Schnapaupf, or Pfannenbecker.

Dear Miss Milicant.
Do not be insulting.
You know very well that we have not conscription.
Were you surprised.
In states.
Or in territories.

In precisely the same way, on attaining to 100 per cent Americanism, the Itzik Kolinsky of today becomes Sidney Collins.

My dear Milly. I wish you would come and tell me about Rigoletto.

Greek names of five, and even eight syllables shrink to Smith; Hungarian names reborn as Martin and Lacy. A Gregory was born Grgurevich in Serbia; a Uhler was born Uhlyarik; a Beresford was born Bilkovski; a Graves descends from the fine old Dutch family of ’sGravesande.

Dear Gilbert. Remember me to your mother.

A lengthy thing, clearly beginning to inhabit (progress under) steam of its own making. (Early in the book, in “Machine for Making a Scene,” the lines—“pull in a circular step in a circle outside / all written without rehearsal; / an idea to submit to the archon eponymos”—betraying a clear intent to flub and muffle the boundaries, to light out for the territories, to prank any deem’d “in charge.” Or again: “to switch masks and costumes between scenes, to fill the shoes and parts . . . unless revived, each play performs only once”: there’s a palpable performing glee in the pieces, some, too, formally “theatrical” (with a chorus, say, intruding, or—in “Machine for Making Eggs”—a chorus playing all the roles: “Chorus: There are also just too many individuals and too few names.”) (One key to reading A Prank of Georges: All text in bold italics is from Gertrude Stein.) I suspect Field and Lang noted directly the richness of the Stein / Mencken collision (a second “Machine for Ellis Island” is included in the book, along with “Machine for the Country Entirely / (Mencken & Stein 3)”—beginning “The map of the country is besprinkled with the most daring / and elaborate fancies— / names as running water / . . . / It rolls with venison richness upon the palate . . .” and is punctuated, too, by Whitman—another monicker-lover—shouting out the names of rivers of America.)

Stein provides the final word in A Prank of Georges (in a seeming dotty prequel to the Alice B. Toklas-report’d pre-operating room exchange that preceded Stein’s death: “She asked Toklas, ‘What is the answer?’ When Toklas did not answer, Stein said, ‘In that case, what is the question?’”:

Gertrude: This is what I mean. After all if you ask a question unless not even then when you are very little is the answer interesting, if there is an answer why listen to it if you can ask another question, listening to an answer makes you know that time is existing but asking a question makes you think that perhaps it does not.

Which’d meet the kind of extravagant play (and damn the consequences) A Prank of Georges propounds (with some necessary pratfalls—some of the anagrammaticks seem merely industrious to me.) There is, throughout, a kind of tension between individuals (names, particulars, thisness) and the overweening implacable larger whatness (world, the smeary continuum). Out of “Machine for Spreading Rumors”:

. . . thus thisness arrives
on a cart   (inedible)
ready for work

a mechanical mouth pronounces:   a haecceitas

from the Latin haec, meaning “this”

because everything is made mostly of quids and parts

Yet four of this appear
clones of exact quiddity
and yet still not instances of this . . .

How see beyond the arch vaguenesses, how see “the identity of the indiscernible”? Stein: “Was this one a complete one? And Field and Lang’s tentative “spindle of what we might call Beauty”—whilst it and they protest (“Je n’aurais jamais dit cela de toute ma vie!”): “copying something so closely it smells itself.” Against—in a monstrous unending tug-of-war—the “complete one”—and the revels of a furious nomenclature (à la Mencken): the “essay” (in “Machine for Strumming,” a lovely moment of abandoning the name only to more completely allow its ravage and commingling, the death-plunge of pure naming that is poetry:

Counter’d by Stein’s jovial (prank) pragmaticks (in an epigraph to the book): “. . . it is not for nothing that anybody calls anybody who they want to do anything for them George. There is something in a name.” And:

I tell all the young ones now to write essays, after all since characters are of no importance why not just write meditations, meditations are always interesting, neither character nor identity are necessary to him who meditates. 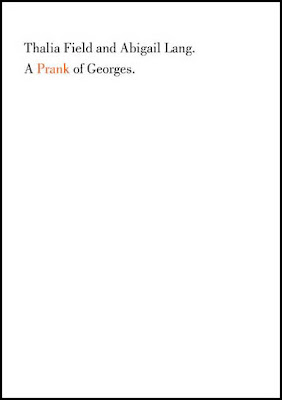