Alfred Leslie’s 100 Views Along the Road

Serendipity, the poniard of the fit percept, ready for its muscular lunge. How explain how, dutifully (drowsily) scanning the shelves of the used book emporium the other day, ticking off the usual absences (legion), Alfred Leslie’s 100 Views Along the Road (Timken, 1988) ’d pop up into the optics-slurring “field,” there for a fiver’s dispersal? I drug it home. The grisaille series, begun when Leslie rent’d a “bay-front cottage in Easthampton, Long Island, to make some landscape watercolor studies for The Killing Cycle,” the artist’s lament heroick for the death of Frank O’Hara, had, after thirty or so paintings’d got made, “emerged so strongly” it’d begun to compete with the work of The Killing Cycle itself for Leslie’s attention. (Lovely, Leslie’s sense, in the introductory piece he writes call’d “Our Luminous Paradise,” of the preternatural demands of one’s work, how it and its gods make sudden outlandish claims and denials, spell-determinant.) Ten years later, in 1978, driving a Ford van east out of California at the end of a winter’s (seemingly thwart’d, dogged by failure) trials of painting (“daily foot-slogging burdened with the gear of an itinerant scene painter”) landscapes around Santa Barbara, Leslie had “just outside Laguna, New Mexico” along U.S. 40, a kind of skew’d nigh-religious moment—one of two—that’d point him back to the Long Island watercolors:

I was regretting the whole trip when a singular pile of colossal stones came into view. Gargantuan stones lying helter-skelter as if they had been casually crumpled by Goya’s mad mammoth just before he began to stuff those screaming babies into his mouth. At the base of the rocks were scattered a few trailers. All this was backlit with a pellucid light in the manner of an epiphany. This sublime western scene hit me hard and interested me more than anything I had just painted in California. I knew I could rescue my trip from failure by drawing it.
The gods were definitely in control, and they had left a drawing pad and 4b pencil clearly visible in the jumbled mess behind the seat. I pulled off the road again, this time to draw a series of four rectangles on a page one under the other like a vertical cartoon on about twenty sheets. I turned back about five miles and made another run at the site. This time as I approached I didn’t stop. Instead, I pressed my knees against the bottom of the steering wheel and began to draw. I managed a few hasty scribbles and filled in one of the long rectangular boxes with a landscape that was really a succession of views. Since I was not drawing from any fixed position, the landscape sketch became a composite of many angles. They would all merge, making the final drawing a compound of individual sightings. Instead of Duchamp’s Nude Descending a Staircase, a painted sequence of stop-motion images all on one canvas, I had condensed a hundred separate percepts into one view. Landscape as myth.

Leslie continues making “driving drawings”—the unavoidable parallel to “driving writings,” scrawl’d nigh-illegibles of the roil’d up hazards of the brain-box’s mete fervency unleash’d, what’s uncover’d under the full sun and cranny-licking breezes of that box’s (rag-top toss’d off) exposure to the road, Merrill Gilfillan’s wonderful phrase “drive an intelligent mile” meaning a way of connecting to that particular word-hoard, though any focus’d manual labor’d do it, even, say, walking—all the way east to home in Massachusetts and then, inexplicably, abandons the project. Two years later: a second coagulant moment.

I had gone for a ride in my old Volvo. I wasn’t going anywhere specific, I just wanted to saunter on wheels, to clear my head, to think. But I didn’t go very far and parked at the local Stop & Shop in Hadley. It was about 3 a. m. by now and there was a thin sliver of moon crisply stated in the sky. On impulse I sat in a small square of grass in the middle of the asphalt parking lot where a tree was planted. Looking up, I noticed an Exxon sign poised high on a tall mast, like another moon. I thought how similar all this was to the scene outside Laguna with the trailers parked underneath those gigantic ancient rocks. Then as now, everything seemed timeless, steeped in calm, without people and faintly doomed.

(David Shapiro relates the early—Killing Cycle—watercolors in the series to “the cinematic desire in Leslie for the ‘long shot,’ as if a too-detailed sense of the figure would be unbearable. The beach is scrutinized, almost scientifically, as the scene of contingency. Many of these studies show the sensuous delight in the ocean and its almost erotic contours. This indulgence in the sensuous surface of the real keeps the studies from being any kind of morbid or resentful encyclopedia.”) Leslie’s review of “the formal basis of the watercolors, starting with the white band that was at the bottom of every picture”:

I had discovered the band accidentally, after removing the tape I used to mask off sections of paper. When I saw the band for the first time I realized that the white unpainted section of the paper not only looked beautiful, but also provided a simultaneous second reading of the picture. It told the viewer that the painted sky above the white band was paint and nothing more. In this seeming subversion of pictorial realism and naturalness, the white band also functioned as a signifier, signing the wholeness of nature. Its role was similar to the fast gradation of intense blue at the very top of Japanese prints that indicates sky directly overhead, which you cannot see without looking up but you know is there as you are looking straight ahead at the horizon. As that intense blue signifies sky out of sight, my white band stands for earth not in view but as a given. The ground you know you are standing on as you look ahead. Earth as ground, ground as ground, base, surface of the paper. Its conceptual function, though, began with an entirely eyeball pleasure. I liked it, identified it, asked what it might mean, and kept it. The white band both signifies and is.

Kin of sorts (in my current rambunct / conjunct of reading) to some of John Ashbery’s lines out of “For John Clare”: “Kind of empty in the way it sees everything, the earth gets to its feet and salutes the sky. . . . There is so much to be seen everywhere that it’s like not getting used to it, only there is so much it never feels new, never any different. . . . ¶ There ought to be room for more things, for a spreading out, like. Being immersed in the details of rock and field and slope—letting them come to you for once, and then meeting them halfway would be so much easier.” All that marvelous noble chicanery about the percept, what enters the ground “starting in the upper left-hand corner, like a sail.” What Leslie’s white band makes clear: how routinely ground—in Angus Fletcher’s words (A New Theory for American Poetry)—is “an unexamined given, claiming without skepticism to be original, to be immemorial, to be archetypal, and natural” (Fletcher’s arguing for Clare’s—and Ashbery’s—ability to regularly unveil an “experienced ground”—“The term means earth—where lightning finds one dissipative home for its deadly force and beauty, or ground in another sense, when the hunted animal ‘goes to ground.’ These are the ‘earth to earth’ from which we come, to which we adhere.” Other senses of ground (unevenly applicable to Leslie, Clare, and Ashbery): freely and unselfishly inherit’d clichés of the age (“like a good song writer, he uses them”); the blithe standing free of “any uncritical, obsessive, usually resentful desire to get rid of foundations” (signal properties of the self-proclaim’d “avant-gardes”); “innate capacity for philosophy” in face of the Heraclitean “ever, onrushing flux.” I teeter along a stretch’d rope between painting and poetry: is it possible to claim the unmark’d page ground? For the sparse figure / negligible grammar of a simple array? Finding myself writing things like:

milk’d reveries of       a Camberwell youth

pokeweed in the reticent field of       mole-color’d gauze

“To break up the sentence, that ’s the first heave.” Leslie—like my fragment’d nota?—is using “black as a color”:

The white band was also the natural yield of my thoughts about making the sketches with a monochromatic palette limited to black thinned with water. My grisaille would stand for all color. Continuing my past work, I used black as a color, not its absence; black as the carrier of light not its executioner. My strictures: no color but a single black, one size paper, one brush. Simple materials that would not blur the idea of the pictures. For most people reality is the confirmation of their expectations. These pictures would offer alternatives. Minimal means and probity would link the mind and the eye. . . . I would eliminate all esthetic choices in favor or pure information. I would resist meaning and interpretation. I would paint with nature rather than from nature. I would be nature.
Nature and process, then, were the formal imperatives for the watercolors. But I was helped further in the definition of these ideas by the fortuitous discovery of the Japanese concept of nōtan, in a Chinese library on Essex Street in New York City. The concept is based on the belief that there can be an eternal unchanging response to the certain beauty of just so much white to just so much black. Nōtan has no counterpart in English and was brought into the vocabulary of English-speaking artists by the painter Arthur Dow in his book Composition, published in 1899. The word is both descriptive and judgmental, bespeaking both style and quality. It is a noun and an adjective.

Though refusing white in severest palette, Leslie’s call’d the original Long Island sketches nōtans. The resultant pieces—large—“I worked up to a sheet that was four by six feet”—become depictings condensery (kin, again, to John Clare’s “experienced ground,” that territory so work’d ’s to become one’s “nature”—Leslie’s “I would be nature”):

I wanted the larger drawings to capture all the transcendent weather and light moments I had ever experienced but not recorded. I wanted to put those sensations into the larger watercolors. For many of these I started less with a drawing of a place than with an overall atmospheric effect. I had to set the paint into motion toward the idea of a snowstorm and catch it, instantly, while working. I had to follow the washes, to enter them physically. The Chinese painting masters call this ink play, jazz masters call it improvisation, Harold Rosenberg termed it action painting. The idea is to set a structured theme into motion and ride it, using precision and skill.

And: “The light I paint is paint, not light.” To translate that into the “wan meat” of the word’d construct. 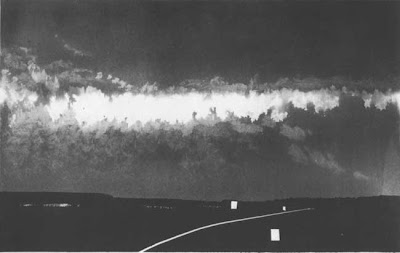 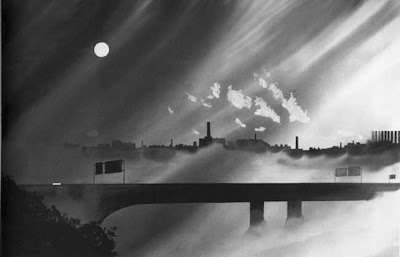 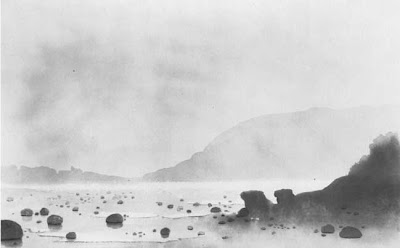 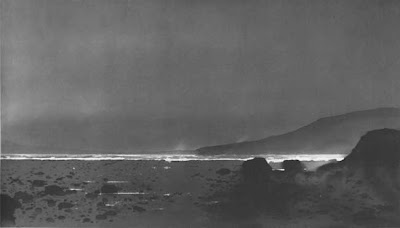 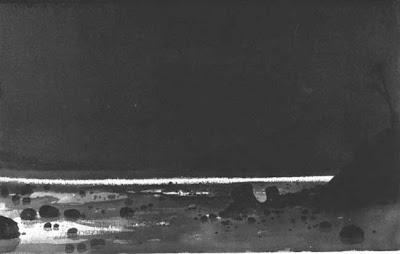 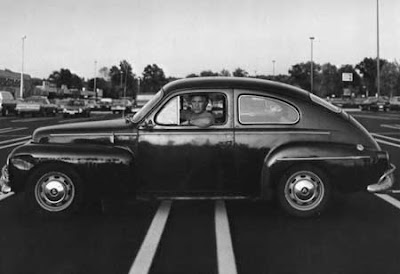