The early weeks of 1956 found Frank O’Hara boarding in Cambridge “in a room in Molly Howe’s house on the third floor” wherein at the other end of the corridor resided one Ralph Bloom about whom O’Hara’d rec’d “sly Cambridge warnings” (sort and nature unidentify’d)—Molly Howe (not Bloom) being Mary Manning Howe (1905-1999), founder (with V. R. “Bunny” Lang) of the Poets Theatre and confidante of Samuel Beckett (in a 1937 letter he’s saying how “pétillante” she looks, and “Susan [Howe, eventual author of Defenestration of Prague (1983) and Articulation of Sound Forms in Time (1987), amongst other wonderments, including The Midnight (2003) wherein a line about Molly Howe: “She loved to produce and destroy meanings in the same sentence.”] beyond good & evil,” adding (Beckett), too, in a kind of glorious doff of abandonment, shedding the “snakeskin of humanity”:

I write the odd poem when it is there, that is the only thing worth doing. There is an ecstasy of accidia—willless in a grey tumult of idées obscures. There is an end to the temptation of light, its polite scorchings & consolations. It is good for children & insects. There is an end of making up one[’]s mind, like a pound of tea, an end of patting the butter of consciousness into opinions. The real consciousness is the chaos, a grey commotion of mind, with no premises or conclusions or problems or solutions or cases or judgments. I lie for days on the floor, or in the woods, accompanied & unaccompanied, in a coenaesthesia of mind, a fullness of mental self-aesthesia that is entirely useless. The monad without the conflict, lightless & darkless. I used to pretend to work, I do so no longer. I used to dig about in the mental sand for the lugworms of likes & dislike, I do so no longer.

O’Hara, in Cambridge, is “accomplishing hardly anything . . . stopped completely in my aimless careering” by Beckett’s Waiting for Godot (in late April, accompany’d by John Wieners, O’Hara’d attend’d a performance starring Bert Lahr and E. G. Marshall at the Moorish-style’d John Golden Theatre in New York), a thing (Godot) that “seemed so perfect that the only thing left for the stage is a lot of characters standing and moving while they recite open vowels” (O’Hara thus daring to merge Rimbaud’s A noir, E blanc, I rouge, U vert, O bleu: voyelles—or, as Christian Bök’s homophonick’d the line, not entirely convincingly—“Anywhere near blank rage / you veer oblivial”—with Beckett’s mash note to despair). That (“seemed so perfect . . .”) in a letter to Kenneth Koch dated May 6, 1956 (out of the second volume of the excellent Josh-Schneiderman-edit’d “this pertains to me which means to me you: The Correspondence of Kenneth Koch & Frank O’Hara 1955-1956). O’Hara says, too, “I can’t think of anything to say which isn’t there beyond my power and would rather think about it than about anything that pops into my own head.” (In the O’Hara biography City Poet, Brad Gooch quotes, too, an O’Hara letter to Joan Mitchell dated two days earlier (May 4, 1956), même plainte: “I didn’t have a chance to tell you how much I loved Godot. As a matter of fact it completely stopped me from working; whistling in the dark hardly ever gets to be music, alas, and who needs mine when they’ve got his. I guess it’s good to know what you’re up against, but it’s not very painless. I came back and found my work sitting here waiting for me, all right, but it had turned into a pile of shit.”

I’d intend’d (last night) only to quote a lovely funny line out of “this pertains to me which means to me you”—O’Hara saying (apparently in indirect reply to lines out of Auden’s rejection letter of O’Hara’s Yale Younger Poets manuscript—“I think you (and John, too, for that matter) must watch what is always the great danger with any ‘surrealistic style,’ namely of confusing authentic non-logical relations which arouse wonder with accidental ones which arouse mere surprise and in the end fatigue”—a rather tired (and un-nail-down-able, to be awkward about it) distinction that strikes me as sprout’d up out of the same rut as Coleridge’s between swoony diffusory unifying (secondary) Imagination and mechanical, logical deadbeat “Fancy”: “I don’t care what Wystan says, I’d rather be dead than not have France around me like a rhinestone dog-collar.” A flatteringly American way of “submitting to” continental meretriciousness, n’est-ce pas?

Flâneur of the vocables (Lissa Wolsak’s “I am no more than a (in)decent magpie” buzzing in my ears.) Thinking (roughly—what is call’d “thinking”) about the “period”—Harvard, Poets Theater, and all. Odd the conjuncts: how, say, Angus Fletcher, he of the soberly titled, A New Theory for American Poetry: Democracy, the Environment, and the Future of Imagination (2004), ought to’ve been, too, he who put together (in 1956) the final issue of i.e., containing poems by Koch (“Fresh Air,” “The Young Park,” and “The History of Jazz”), Ashbery (“Chinatown”), and O’Hara’s “Military Cemetery”:

We’ve got to get our war memorials corrected.
At the time of the great Fatigue of 1949
I found that all the names were spelled wrong
in the cemetery rosters and on the very stones,
that is, there was but one man in every grave,
the selfsame troubadour with egrets and looks,
“good looks” they’re called by cemetery people.

The political situation has certainly gotten splendid
enough for us both to take action on this matter,
that is, to get him out of all the graves but his own
and then kill the others, they’ve been romping too long,
and pop them into the graves that have been so
falsely filled for these many years like the mirror
trick. If this gets to the newspapers first
there’ll be a mad scramble for the position of collector,
but then, there always is. To be public spirited, alas!
is to seem mysterious to the very people
you are trying to fill the graves with. They get away.

Now we will get a caravan of movie stars
to consecrate our cemetery, and a hair lotion heiress
will donate the Great-Immovable-Daytime-Light
which is to guard the tomb like a monkey;
there will be a different person in each grave.
And the wind will again whisper through the poplars
when we plant them, and we’ll be able to concentrate
on the green stains we get on our trousers when
we lean against the stones in springtime reading books.

Epigraph out of the Camille Saint-Saëns opera Samson et Dalila (1877). O’Hara’s jocular-plaintive “To be public spirited, alas! / is to seem mysterious to the very people . . .” and the piece’s concern for the individual particular (“all the names were spelled wrong”) versus the mass (“the selfsame troubadour”) seems oddly akin to one of Fletcher’s (democratic) concerns in A New Theory:

Thus for the poet the One must fall, becoming simply the supreme omnisignificant sign—the hypersign—working along with a myriad apparently lesser signs. Above all, the poet prevents any hypersign “god-term” from arrogating rulership. Some ideas and their names may control larger conceptions than others, but there is in poetry an abiding upper limit of movement toward a transcendent level of power masquerading as a mode of ultimate fixed Being. It was to preserve this openness that led Wallace Stevens to read Darwin and to think like a Presocratic, or an Ovidian seer, when he said of poetry at highest pitch, “it must change.” By contrast, the idea of God inevitably undermines the poem’s life in the moment. If Thales chooses water, and Heraclitus fire, these elements engage in rivalry with each other as equally natural entities. By contrast, absolutes brook no rivals. Given nature’s variety, there is always an argument for the literary advantage of polytheism, as my friend, the late Kenneth Koch, liked to argue.

Only mention of Koch. O’Hara (oddly enough) merits none. Fletcher’s primary exhibits: Whitman and Ashbery (and John Clare). Something to think about (what is call’d “thinking”): out of Fletcher’s sentence that “The mere eminence of metaphor and metamorphosis is poetic history tends to undermine absolute power”—some parallel argument that metaphor’s wild dispersal of energies is, itself, inherently democratizing (against, say, the objectivist’s “a girder, still itself”—how differently that’d read if it’d been writ, à la Francis Scott Key, “a flag, still itself”—or Pound’s “the natural object is always the adequate symbol.”) Oi. 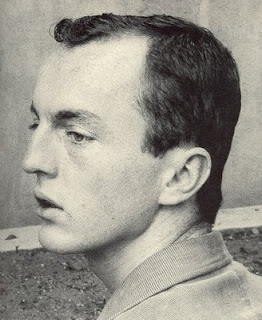