Conduct’d the faintly film noirish Vibe, all sprezzatura’d-up with new brake-work, out (Wednesday) toward Jackson (“hotter ’n a pepper sprout”), across the placid St. Joseph to snip off the corner (befoul’d, see Gary) of Indiana, and scoot through the “city of big shoulders” (Chicago): end of summer voyage to see violinist Leila Josefowicz (with pianist John Novacek, who bang’d and jump’d and bent morendo down to see off the little dying notes, and made lovely monkey-mouths, indéchiffrable comme un grimoire.) Poetics adage: always identify with the sidekick (see its etymological boots in criminal slang: “Pockets range between ‘side kicks’ and ‘double insiders’), not the hero. Josefowicz play’d Brahms’s 1906 Scherzo in C minor (composed for one Joseph Joachim—a violinist whose “musical motto: F A E” stood for Frei aber einsam—“free but alone”), Shostakovich’s single violin sonata (“unyielding in its modernity, shifting between tonal passages and freely atonal segments” that had the blazer and khaki’d model dottering Republican in front of me in a childish fury), Stravinsky’s 1932 Duo concernante (trigger’d, one notes, by a passage in Charles Albert Cingria’s book Petrarca—“Lyricism cannot exist without rules, and it is essential that they should be strict. Otherwise there is only a faculty for lyricism, and that exists everywhere. What does not exist everywhere is lyrical expression and composition. To achieve that, apprenticeship to a trade is necessary.”) (Out of Stravinsky’s Autobiography. He (Stravinsky, therein) also approvingly quotes Tchaikovsky (in a letter): “Since I began to compose I have made it my object to be, in my craft, what the most illustrious masters were in theirs; that is to say, I wanted to be, like them, an artisan, just as a shoemaker is. . . . (They) composed their immortal works exactly as a shoemaker makes shoes; that is to say, day in, day out, and for the most part to order.” Contra the fit mystical, the abrupt descent (sun-shaft and hearkening voice) of the angelic blow. Though who’s to say it isn’t that diurnal rut that beckons such?) Josefowicz and Novocek perform’d, too, a piece by the Estonian Erkki-Sven Tüür, Conversio (1994)—with a whole midriff of violin and piano seemingly caught in a stutter-y combat regarding the manner of proceeding (or ending), a kind of furious stasis. Tüür, who found’d and perform’d with the rock bank In Spe:

My work as a composer is entirely concerned with the relation between emotional and intellectual energies and the way in which they can be channeled, accumulated, liquidated and re-accumulated. My pieces are abstract dramas in sound, with characters and an extremely dynamic chain of events; they unfold in a space that is constantly shifting, expanding and contracting, not so much like a mosaic, but rather in the manner of a block of sculpture. I have been interested in a combination of opposites—tonality versus atonality, regular repetitive rhythms versus irregular complex rhythms, tranquil meditativeness versus explosive force . . .

To conduct the faintly film noirish Vibe is to find oneself at the center of an advancing circle (I am stuck, of late, re-encountering it in Angus Fletcher’s A New Theory for American Poetry—Iain Sinclair makes it central to Edge of the Orison: In the Traces of John Clare’s ‘Journey out of Essex,’ too), with the lovely Clare report (found in the autobiographical writings) of going toward the (motile, receding) reaches of the horizon—seeking what the Greek Anaximander call’d “the unlimited”—the origin of the cosmos. Clare (in Clare’s orthography):

I loved this solitary disposition from a boy and felt a curosity to wander about spots where I had never been before         I remember one incident of this feeling when I was very young         it cost my parents some anxiety         it was in summer and I started off in the morning to get rotten sticks from the woods but I had a feeling to wander about the fields and I indulgd it         I had often seen the large heath calld Emmonsales stretching its yellow furze from my eye into unknown solitudes when I went with the mere openers and my curosity urgd me to steal an oppertunity to explore it that morning         I had imagind that the worlds end was at the edge of the orison and that a days journey was able to find it         so I went on with my heart full of hopes pleasures and discoverys expecting when I got to the brink of the world that I could look down like looking into a large pit and see into its secrets the same as I believd I could see heaven by looking into the water         so I eagerly wanderd on and rambled among the furze the whole day till I got out of my knowledge when the very wild flowers and birds seemd to forget me and I imagind they were the inhabitants of new countrys         the very sun seemd to be a new one and shining in a different quarter of the sky         still I felt no fear         my wonder seeking happiness had no room for it         I was finding new wonders every minute and was walking in a new world often wondering to my self that I had not found the end of the old one       the sky still touchd the ground in the distance as usual and my childish wisdoms was puzzld in perplexitys . . .

I like the way the “incident of this feeling” is a fell one, liable, apt, unconstrain’d, nigh “fit mystical.” I like, too, the “got out of my knowledge”—moving beyond the quotidian circle into unsuspect’d (fecund) knowings. (Though only by dint of daily practice: that gleaning routine, “off in the morning to get rotten sticks from the woods.”) Rummaging idly in Nathalie Stephens’s new translation of Édouard Glissant’s Poetic Intention (Nightboat Books, 2010), I uncover’d: “For the key to the cosmic secret, writes Hans Urs von Balthazar in his Cosmic Liturgy is still motion, or more precisely, it is the study of the relationship between rest and motion, whose balance is what defines the essence of finite being.” Territory I usually light out of, intrepid around the cosmic (to say nothing of the liturgic, though I find Clare’s “orison” a perfect incidence of misspelling). What I keep thinking: how devise a way of writing it? Writing a still center (in a circle continually and impetuously displac’d). Fletcher turns briefly to Emerson’s “Circles”—“circular wave of circumstance”—pointing out how he (Emerson) follow’d “formal master” Montaigne’s “The shape of my library is round with only sufficient flat wall for my table and chair; as it curves about, it offers me at a glance all my books arranged in five rows of shelves all around.” (Draw that. The necessity of a “flat wall” ’d seem to sideline Montaigne, and why the need for a flat area if one only puts one’s back to it?) At the impasse thus deliver’d (“back against the wall”), turn to the lexicographic. Fletcher: “Since ideas and form are lexically the same—idea being translated into the Latin form—it follows that the history of ideas is actually the history of forms and these in turn belong as much to poets—who manipulate form, arguing against the Platonic absolute—as to the ‘theory of ideas,’ which by its nature must fixate and hypostatize each idea.” O.E.D-city-breakdown: “idea, noun. a. late L. idea (in Platonic sense), a. Gr. ιδέα, look, semblance, form, configuration, species, kind, class, sort, nature, (in Platonic philosophy) a general or ideal form, type, model, f. root ίδ-, ίδεῖν, to see: the word being thus analogous in derivation and original sense to L. species from spec-ĕre to see, behold.” No ideas but in form. 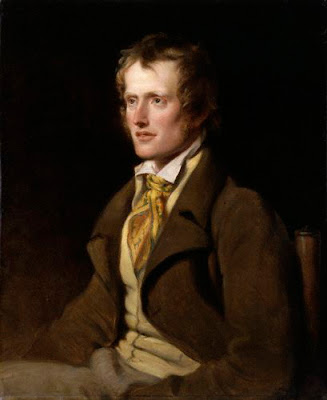