Chop’d the cilantro straight off the rubber-band’d “bunch” into the white beans, mash’d it down in the stock with the white chunks of poulet rôti, the marvelous little pearls of oignons sautée’d, and the green chili peppers dump’d out the ruptured tin—oh hell, the whole gastronomic topos barely stirs a muscle in my imaginary. At loose ends, I’d rather do anything besides make a meal. For several months now one routine is the pulling down off the shelf of a monograph call’d Alfred Leslie: The Killing Cycle by Judith Stein and David Shapiro, a thing uncover’d somewhere near Chicago, reporting a 1991 exhibit at the Saint Louis Art Museum. (“The artist recalls that his first sketch for the painting was done in the middle of a January night in 1967 in New York. Visible on the drawing, the title The Death of Frank O’Hara, . . . was almost immediately changed to The Killing of Frank O’Hara.”) I read a little and return it to the shelf, hamper’d by something, some tourbillonnant vividry, its rose-color’d end-papers loud’s a schoolgirl’s jupe, the shreds of my reading inklings of some metastasis of a whole new rubric of despair. (Next to it a paperback of Orwell’s Down and Out in Paris and London, the “vigor and frankness” of its garish cover, blitzkrieg-fiery sky behind the soot’d tenements: “neither of the Rougiers”—a couple who sold cartes postales, seal’d up like French pornography, of the Loire’s innumerable chateaux—“had taken off their clothes for four years.”) A kind of incipient pervasive anomie, down to the tints and hues. The usual keep.

One of the subtitles Frank O’Hara wrote for Al Leslie’s film The Last Clean Shirt (1964): “I have the other idea about guilt. It’s not in us, it’s in the situation. You don’t say the victim is responsible for a concentration camp or a Mack truck. Maybe if we were all flowers, and someone stepped on us—someone, even God, might say—That’s too bad.” So block’d in, under a scene, repeat’d, of a man and woman in a convertible, driving through a city, just moments after a gunshot is heard. Is it Richard Howard, in an early assessment of O’Hara’s work, who warns so precipitously (that is, helplessly) against reading prophecy into nigh every word of the poet: “A man, in particular that emblematic man a poet, who by his surrogate office must stand, in particulars, for the generality—a man who dies at forty is at every moment of his life, we say, a-man-who-has-died-at-forty . . . and retrospectively we glean, in the course of a broken-off existence, the seeds of a destiny which, planted perhaps only by ourselves and cultivated however arbitrarily by our hunger for the inevitable, will bestow upon the blasted biography this flowering: a more grateful contour, an acceptable outline. We say, he was death-ridden, doom-haunted, and that he belonged to the race—as Thomas Mann said of Cocteau—which dies in the emergency ward.” And Howard (helplessly) provides the slings and arrows of O’Hara’s prophetic (and mock-heroic) “stance”:

I historically
belong to the enormous bliss of American death
“Rhapsody”

I am really an Indian at heart, knowing it is all
over but my own ceaseless going
“Ode to Michael Goldberg (’s Birth and Other Births)”

Ah!
To be at vespers with Mediterranean
heroes!
“The Argonauts”

The ancient world knew these things (Be not obedient of the excellent, do not prize the silly) and I am unable to convey as well as those poets the simplicity of things, the bland and amused stare of garages and banks, the hysterical bark of a dying dog. . . . I do not want to be the victim of the ability to enthuse myself. . . . Most of my thoughts are blue with miles of figures and chariots and nudes on paths of primrose, going down the drain of modern times like a rhymed heroic tragedienne.
“Day and Night in 1952”

And (in an essay on Jackson Pollock):

Our art should at last speak with unimpeded force and unveiled honesty to a future which well may be non-existent, in a last effort of recognition which is the justification of being.

I run! closer always move,
crying my name in fields of dead I love.
“A City Winter”

Back to leafing through the Leslie monograph. Picture of a jeep hanging outside a second-floor window (in 1972, he’d convinced Amherst—where he taught that year—to provide him with a studio and a Willys). By 1966, Leslie’d lost three friends to car crashes: Jackson Pollock in 1956, sculptor David Smith in 1965, and O’Hara. Following O’Hara’s death, he’d attempt’d to add material—Willem De Kooning and Patsy Southgate talking about O’Hara—to an earlier film call’d Messy Lives (1962-1963) in homage. The seventh of October of that year: Leslie’s studio destroy’d by fire. Twelve firefighters kill’d. All Leslie’s art work, films, and personal possessions lost. “When my studio burned, I gave up filmmaking altogether and merged all my ideas into . . . painted stories. This metastasis of ideas was not unusual for me except for its suddenness. It was not possible to reconstruct all of my working situations after the disaster.” The Killing Cycle: “The Narrator” (1973), “The Cocktail Party” (1967-1978), “The Accident” (1969-1970), “The Telephone Call” (1971-1972), “The Loading Pier” (1975). Leslie:

The Killing Cycle is not primarily about any one thing. Not only about death or Frank O’Hara or about the loss of American innocence or about the defiling of the seashore or about the brutality of the automobile or a lecture to the avant garde or the demise of a hero or the depiction of a single instant in time or multiple figure painting or the loss of my work by fire . . . or . . . or . . . What this work is really about I can’t say, except that formally it is meant to be multi-leveled with its implied meanings focused enough that they are all fighting for ascendancy. And that these jostling meanings seek out the viewers perceptions to combine and recombine with each person so that no one interpretation succeeds.

Is there a tiny echo of O’Hara’s own “batty way to give information about the poem” in the splendid non-notes (contra-Eliotic) of “[Notes on Second Avenue]”? That “the verbal elements are not too interesting to discuss although they are intended consciously to keep the surface of the poem high and dry, not wet, reflective and self-conscious. Perhaps the obscurity comes in here, in the relationship between the surface and the meaning, but I like it that way since the one is the other (you have to use words) and I hope the poem to be the subject, not just about it”? Ongoing here, that “batty way to give information.” One thing Leslie argues for: “a desire to restore narrative subjects to the practice and intellectual life of painting and painters, and to establish story as a formal element and process . . .” And of course, he succeeds by painting in a “cinematic” style (even the initial study sketch includes five notes, a kind of filmic sequence):

Leslie’s research for the series, done “intermittently over a period of fourteen years from 1966 to 1980”: interviewing J. J Mitchell [Mitchell, with Virgil Thomson and Morris Golde’d been out at a night spot with O’Hara that night—Mitchell and O’Hara stay’d late, “well past two in the morning”]. Judith Stein:

Leslie felt impelled to visit the actual site of the accident. He wanted to examine the physical layout of the beach on Fire Island and see the location of the dunes and the houses in relation to it. Leslie decided to stay there all day and night. Late in the afternoon he experienced the peculiar driving etiquette practiced on the island. As he lay on the sand close to the water, watching a young child playing near its mother, he saw a beach taxi moving in his direction at a steady clip. He was astonished that it never slowed its pace, and that people on the beach just jumped out of its way. He saw the woman near him run to pick up her child directly from the path of the vehicle, which never altered it speed as it passed right by . . .

When he returned to Manhattan he called the Coast Guard and the Weather Bureau to learn the prevailing weather, the tide, and the position of the moon on the night that O’Hara was struck. Although he did not know exactly how he would use these facts, he was comforted to have descriptions of the authentic conditions at his disposal. But his concern for verisimilitude did not endure: “In the end, I discarded it all. But it was important to me to assimilate it and have it all in my hand and then put it all aside and treat it as a picture, which is what I did . . .

Each picture becomes (note the Poundian “an intellectual and emotional complex in an instant of time” echo) “the depiction of a specific instant in time,” a frame (though the question of verisimilitude’s need and employ seems one Leslie never fully solved):

In a couple of the drawings and in one of the paintings I actually made it look like Frank. Then I thought it was a mistake. The important thing was to have an authentic picture of a person. At one point in time I thought it was very important that it looked like Frank. At other points in time I thought it was less important. That had to do with the very powerful shift in what I thought really should be happening with the picture. At the very beginning I had decided that the single most important issue in contemporary American painting was the depiction of a specific instance in time. So that in painting this picture of an accident it just could not be a general view of somebody being killed. It had to be a particular person.

Alfred Leslie, Two Drawings Call’d “On the Sand,” c. 1968
Frank O’Hara as Edouard Manet’s “The Dead Toreador” (1864)
The lines read: “He lay on the sand—on his back—one hand on his chest—he looked like he was asleep.” J. J. Mitchell’s words. 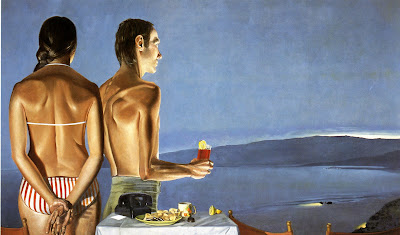 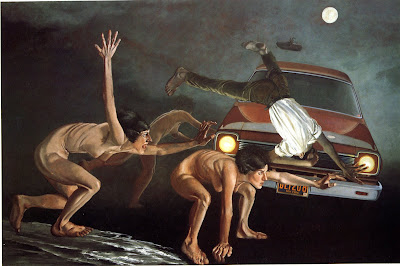 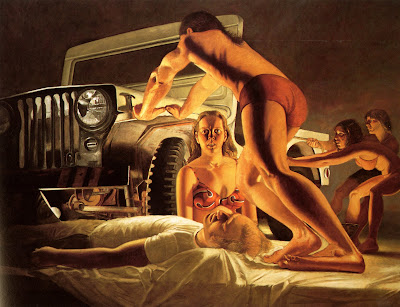 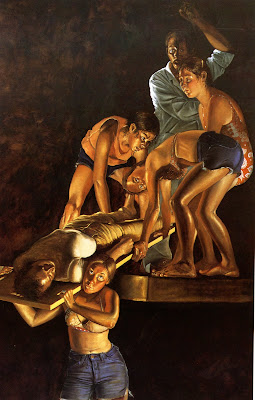 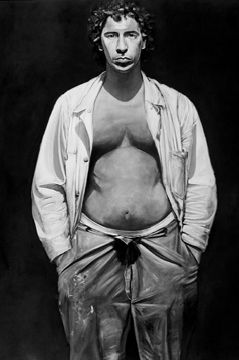 A couple pertinent addenda here. I am off for a couple days.