Age of info, info spurious and supreme, info’s Golden Age, a glut and carnage of info. Against which: a counter-rational hysteria, trump card of the thwart’d and incommensurate: attempts to hijack info’s demeanor. Attempts—smarmy, flaunting, with the grease-coagulating calculatedness of a cold-eyed killer—to turn info against itself by plagiary: debased info is info one need no longer heed. A lazy (and popular) way of reckoning. So: a kind of madness and enfeeblement, a counter-opulent sloth in the camps (see Latin campus, plain, field, akin to Old High German hamf, crippled, Greek kampē, bend), miserly thinking accompany’d by onslaughts of re-released disjecta, imprudent, unspurn’d, urban. A kind of rural-spurning prurient bedlam insisting that any contemplatory slackness—“to walk leisurely into the city”—or metaphysical accountancy, double-entry or not, is starry-eyed and wholly alien. So: miles of smiles today in our high jocular greenback-imprint’d (or word-imprint’d—c’est plus la même chose) three-piece suit (sans chausettes, sign of a “tol’able” hoi polloi affinity, up to the point of seeing one “own” words fed back into the loop . . . that brings a scowl into the usual complacent void of the conceptualist’s phiz.) Scowl away.

“Anton Mesmer, discoverer of animal magnetism, believed that the universe was filled with a mystical fluid which permeated everything and was the conduit of the influence of the stars—an alchemical connexion between the Shakers’ effluvium and the modern notion that our bodies are made of stardust.” So that’s where we be.

Or: “The fin de siècle had produced new prophetesses, women such as Elspeth Buchan, a contemporary of Ann Lee who claimed that God’s power ‘wrought such a wonderful change’ that she was able to live without food for many weeks. She too employed holy breath, decried marriage as ‘the bondage of the law,’ and bid her Buchanites sleep on heather bundles in a barn. She would stand in a circle of young men and touch each with her palm, at which they would swoon away and lie about her like some human crop circle, springing upright when touched again. She also set a date for the Second Coming in July 1786, when her followers, their heads shaved save for tufts by which angels could pluck them up, waited on a wooden platform built on a nearby hill—only instead of the Lord a wind arrived and sent them crashing to the ground.” (Philip Hoare’s England’s Lost Eden: Adventures in a Victorian Utopia)

Or: “The very sign of its energy is that it doesn’t believe in itself; it fails to succeed, even at a cost of millions, in persuading you that it does. Its mission would appear to be, exactly, to gild the temporary, with its gold, as many inches thick as may be, and then, with a fresh shrug, a shrug of its splendid cynicism for its freshly detected inability to convince, give up its actual work, however exorbitant, as the merest of stop-gaps.” (Henry James’s The American Scene, talking about New York, and “newness.”)

“The Leduc brothers, real little snakes in the grass; if you weren’t careful, before you knew it they’d be at your throat.”
The inventors of the miniature fish-tank disasters were to follow diverging paths. Shortly after Guderian and Kleist’s panzer divisions broke through the front, Alphonse went out into the street and put a bullet through his head. In fact, during the Phoney War, that is, from October 1939 to April 1940, he had threatened to kill himself dozens of times. When did he not act on those threats? Perhaps because the situation was not yet sufficiently desperate to make him pull the trigger. His twin brother tried to dissuade him but knew deep down that whatever he said, Alphonse would not be deterred. In 1947, Charles Leduc was able to board a ship bound for Buenos Aires, where, as in Paris, his fish tanks were completely ignored by the public. From then on his life was one long, slow migration, with halts that sometimes lasted longer than he would have liked, toward the magnetic, icy, tranquil north. He spent his last years in Vancouver, dealing in furniture and antiquarian books.

(Robert Bolaño, in Monsieur Pain, demobbing the Leduc twins, artist-conceptualists: “On the bottom, resting on a layer of very fine sand, were miniature boats, trains, and planes arranged to depict calamities, disasters simultaneously frozen in an artificial moment, over which indifferent goldfish were swimming back and forth.”)

“Portraits”—one’d say—of some of the Conceptualist playas. Funny stuff encounter’d of late in the aftermath of the professional circus that is the AWP, its “reports” (by its clowns and clown-aspirants). One of the funniest: a photograph of the earnest and besuit’d panelists presenting “Flarf and Conceptual Poetry”—what Kent Johnson’s call’d reminiscent of an “obscure archival shot from the 23rd Plenary Session of the Korean Workers’ Party in Pyongyang.” (“Forward, Brave Avant-Garde of the Academy!”) (How quickly the orange haz-mat suit is exchanged for the non-toxic wearables of the pro!) (“Genius, like truth,” says Edward Dahlberg, “has a shabby and neglected mien.” “And Miguel de Unamuno tells us: ‘It is time to call a fool a fool, a liar a liar, and a thief a thief.’”) Below, a report of another silencing (“Recognize the cunning man not by the corpses he pays homage to but by the living writers he conspires against with the most shameful weapon, Silence . . .”) written by Kent Johnson:

Whither, forsooth, the brave poets of the Conceptual / Flarf United Front?

Kenny Goldsmith claims that Conceptual poetry is all about engendering thought and discussion around Ideas. He proposes, in his criticism and appropriated work, that these ideas have no ultimate Authorial location or purview, that Conceptual writing leaves traditional notions of property and control in the dust. Ideas unmoored in the digital realm are the new thing and everything, says he.

Except, apparently, when an Idea has been placed under Signature of a Conceptual or Flarf poet, in which case the text in question is no longer open to question insofar as its proper property is concerned. The function of Authorship and its paratextual rituals, it seems, are sacrosanct, beyond the bounds of direct conceptual dare.

For example, Goldsmith has not, to this day (if you’ll forgive the bad pun), and despite considerable discussion elsewhere, said a word about the conceptual reframing of his book DAY by this and this. Christian Bök is the only one among the Conceptual / Flarf front to have acknowledged it, twitting on Twitter that I am a “troll” with the temerity to “rip-off Goldsmith’s book.” This being a tweet by the same writer who has prodigiously extolled the virtues of “theft” in literature . . .

I promise that this collective reaction from the Conceptual / Flarf front does not piss me off. In fact, I promise it was exactly what I was hoping the reaction would be.

On Saturday, April 17th, I posted the following informational, gently tweaking comment at Kasey Silem Mohammad’s blog, Lime Tree, under a post announcing and describing a new course (“Writing 399: Conceptual Writing”) that Mohammad will be teaching in the fall. It was the first time I’d sent a comment his way in close to three years.

The comment appeared (as Dale Smith is my witness!) and was then deleted by Mohammad, less than five minutes following.

Of course and true, it’s merely one more lost remark in another poetry blog comment box. But I thought I’d make note here of the little, pathetic affair. But why, you ask, if little and pathetic it be? Well, I will say why: Because such sadly defensive policing, such timorous posture towards real-time written challenge of their work seems more and more the adopted mode for the members of this “subversive” wing of the post-avant, even as such clamp-down behavior brazenly flies in the face of everything these “libertarians” of the Word claim to uphold . . . And even as they’ve attained more and more position and capital inside institutions like the AWP, MLA, the Poetry Foundation, and so forth . . .

I promise, also, that this process of legitimation does not piss me off. In fact, it is exactly what I suspected the outcome would be.

Maybe the last “even as” above sort of begs the question, actually. Recuperation is, after all, the deep plot of the game. And Strategic Silence, as the game moves on, becomes the preferred norm, when it comes to facing down critique. Their now Pulitzered and Ivy Leagued Language mothers and fathers have taught them well. In any case, this instance is but the latest in a venerable string of blog erasures and Mum’s-the-Word dodges by this brave new Po-Pop brood of “delinquents.” They are guided, one might say, by their sub-cultural genes.

Here, for the record, is the comment that was deleted. The links are to the announcement of “my” DAY and to the production video of that book by Geoffrey Gatza (the latter being indisputably—though some are obviously displeased by the fact—perhaps the most sublime Conceptual gesture of the current century [One, one’d note, wholly missing in the archives of the Ubu, the Ubu Roi’s self-gratifying greed and gluttony—see Jarry—apparently stopping at any hint of Ubu-mockery . . . JL]):

Any chance you could assign this, too? Trying to move some books . . .

And this, as well, contained on the above page? 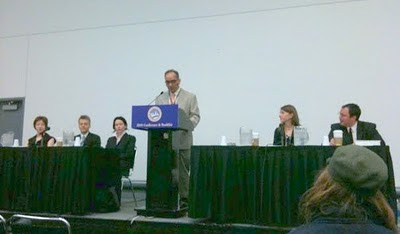