Reading Roberto Bolaño’s smallish Antwerp (New Directions, 2010), translated by Natasha Wimmer. It’s a dandy pocket-sized black hardback’d thing, with a boldly stamp’d cover: “The only novel that doesn’t embarrass me is Antwerp.” Bolaño himself. Written—“just loose pages I reread and tinkered with, convinced I had no time”—in 1980—“for the ghosts, who, because they’re outside of time, are the only ones with time.” (Time, “that consummate joker,” the way it so irretrievably misplaces its things—“Memory slowly dictates soundless sentences” is one of Bolaño’s terrible concerns.) Bolaño:

My sickness, back then, was pride, rage, and violence. Those things (rage, violence) are exhausting and I spent my days uselessly tired. I worked at night. During the day I wrote and read. I never slept. To keep awake, I drank coffee and smoked. . . . The scorn I felt for so-called official literature was great, though only a little greater than my scorn for marginal literature. But I believed in literature: or rather, I didn’t believe in arrivisme or opportunism or the whispering of sycophants. I did believe in vain gestures, I did believe in fate.

That’s out of a statement call’d “Total Anarchy” (“Tacked up over my bed was piece of paper on which I’d asked friend from Poland to write, in Polish, Total Anarchy.”) Bolaño wrote in 2002 to accompany the original printing of the book in Spain. Who he read (“certain science fiction writers and certain pornographers, sometimes antithetical authors, as if the cave and the electric light were mutually exclusive”): “Norman Spinrad, James Tiptree, Jr. (whose real name was Alice Sheldon), Restif de la Bretonne, and de Sade. . . . Cervantes and the archaic Greek poets. When I got sick I read Manrique.” The book is construct’d of fifty or so number’d pieces, each of a page or two, vignettes, prose poems, fragments of narrative geste. A kind of cubist prose—I think of Pierre Reverdy’s unanchor’d individuals caught in odd self-animating landscapes, and what Ron Padgett calls Reverdy’s “austerity” and “spookiness.” Reverdy (out of “Under the Stars”):

Insults fly out of the window and I withdraw.
So, not far outside of town, on the edge of a river and a wood. I found a door. A simple gate with no lock. I got behind it and, beneath the night that has no windows but does have large curtains, between the forest and the river that protected me, I was able to sleep.

. . . There aren’t any police stations. To name is to praise, said the girl, laughing. The same passion, taken to infinity. Cars stop between potholes and garbage cans. Doors that open and then close for no apparent reason. Engines, streetlights, the ambulance reverses away. The hour swells, bursts. I guess it was a monkey at the top of a tree.

“Cubist,” too, in Bolaño’s means of making slight reassessment of bits of information by reconfiguring and, rephrasing sentences: the beginning of what’s quoted here (out of “A Monkey,” the ninth chapter of Antwerp) reads: “To name is to praise, said the girl (eighteen, a poet, long hair). The hour of the ambulance parked in the alley.” Such reiterating with variance occurs across parts, too: beyond some stray (not wholly explicable) characters—a hunchback, a nameless girl, “the medic,” “the Englishman,” “Roberto Bolaño,” &c.—the novel is punctuated by, for example, recurrent parenthetical mentions of applause: “(Applause.),” “(Applause and laughter.),” “(Someone applauds.),” “(Someone applauds. The hallway is full of people who open their mouths without a sound.),” “(Miles from here people are applauding . . .),” “(A stifled attempt at applause.),” &c. Here’s a part, number’d twenty-three, titled “Perfection”:

Hamlet and La Vita Nuova, in both works there’s a youthful breathing. For innocence, says the Englishman, read immaturity. On the screen there’s only laughter, silent laughter that startles the spectator as if he were hearing his own last gasps. “Anyone can die” means something different than “Anyone would die.” A callow breathing in which it’s still possible to discover wonder, play, perversion, purity. “Words are empty” . . . “If you put that gun away we might be able to negotiate” . . . On a average of three hours’ sleep a night the author writes these threats by the side of a pool at the beginning of the month of October. Innocence almost like the image of Lola Muriel that I’d like to destroy. (But you can’t destroy what you don’t possess.) An urge, at the cost of nervous collapse in cheap rooms, propels poetry toward something that detectives call perfection. Dead-end street. A basement whose only virtue is its cleanliness. And yet who has been here if not La Vita Nuova and Hamlet. “I write by the pool at the campground, it’s October, there are more and more flies now and fewer and fewer people; by the time we’re halfway through the month there’ll be no one left and the cleaning service will stop coming; the flies will take over until the end of the month, maybe.”

There’s a terrific leveling here: perversion and purity, Hamlet and Lola Muriel, flies and humans, laughter and “last gasps.” Is a refusal of the conventional narrative arc a way of defeating plot’s way of insinuating a (temporary, provisional) hierarchy into the world? Elsewhere Bolaño writes (of a writer confessing the difficulty of writing): “All I can come up with are stray sentences, he said, maybe because reality seems to me like a swarm of stray sentences.” (And quickly abuts it with—hindering any snap enlistment of Bolaño into anything like New Sentence-ry: “Desolation must be something like that, said the hunchback. ‘All right, take him away’ . . .”) At the end, number’d like any other “chapter,” a “Postscript”:

Of what is lost, irretrievably lost, all I wish to recover is the daily availability of my writing, lines capable of grasping me by the hair and lifting me up when I’m at the end of my strength. (Significant, said the foreigner.) Odes to the human and the divine. Let my writing be like the verses by Leopardi that Daniel Biga recited on a Nordic bridge to gird himself with courage.

(Biga—a French poet, b. 1940—is just one of several nods to the biographical “real” in Antwerp. Another is mention of news of “Sophie Podolski . . . kaput in Belgium”—legendary author (1953-1974) of the hand-scrawl’d works of Le pays où tout est permis.) Such genre-smearing is another way of leveling, and akin to making the human “daily availability” of writing undifferentiated from “the divine,” the courage-girding ineffables. Why “Antwerp”? A minuscule anecdote in a book of broken stories (with the disembody’d voices—choral, see “the archaic Greek poets”—erupting):

In Antwerp a man was killed when his car was run over by a truck full of pigs. Lots of the pigs died too when the truck overturned, others had to be put out of their misery by the side of the road, and others took off as fast as they could . . . “That’s right, honey, he’s dead, the pigs ran right over him” . . . “At night, on the dark highways of Belgium or Catalonia” . . . “We talked for hours in a bar on Las Ramblas, it was summer and she talked as if she hadn’t talked for a long time” . . . “When she was done, she felt my face like a blind woman” . . . “The pigs squealed” . . . “She said I want to be alone and even though I was drunk I understood” . . . “I don’t know, it’s something like the full moon, girls who are really like flies, though that’s not what I mean” . . . “Pigs howling in the middle of the highway, wounded or rushing away from the smashed-up truck” . . . “Every word is useless, every sentence, every phone conversation” . . . “She said she wanted to be alone” . . . I wanted to be alone too. In Antwerp or Barcelona. The moon. Animals fleeing. Highway accident. Fear.

To note: that pig story (or story of a man) abuts (or is “set” like a magnificent jewel) against some of Bolaño’s usual human piggery (“He was face down and you could see the bullet holes in his back, in his brown sweater. They emptied a machine gun into him, said a dwarf who was standing to the left of the sergeant . . .” and “So the cop turned out the light and unzipped his fly. The girl closed her eyes when he turned her face down. She felt his pants against her buttocks and the metallic cold of the belt buckle . . .”) Just so’s not to make only a benign and humdrum “literary” reading of “Every word is useless, every sentence . . .” Bolaño’s friend and literary executor Ignacio Echevarría apparently call’d Antwerp the “Big Bang” of Bolaño’s fiction, all its elements highly compress’d, a source and origin. I read it, too, as the most ambitiously radical of Bolaño’s works. 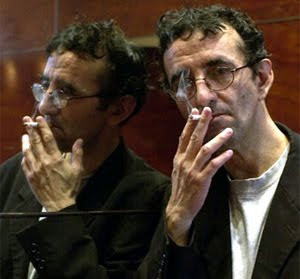 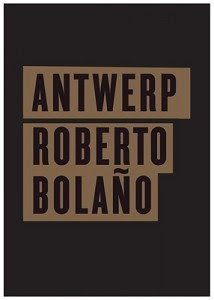