Up early, out into the scattering. The light’s like syrup in the corridor where I―surreptitious ’s a continental op―xerox Zoltán Kodály’s “Serenade for Two Violins and Viola,” Op. 12. I am thinking of the innocent dirt of Frank O’Hara’s childhood:

We loved our bodies,
navyblue sneakers,
Frank Sinatra
and pistachio frappes,
It’s all in our heart and dirtied there

without a bath of
tears or war,
with the help of
the Zeit and of the
Geist on the western divan in the bare

cupboard where
adolescents plot;
never have so many
been so happy with so
little. We loved the bright first pot.

Straight out of Wystan. (“The things I did could not / Be so shocking as they said / If that would still be there / After the shocked were dead . . .”) The yellow sun carry’d in that “bright first pot.” Mark Polizzotti says Dylan—“Just Like Tom Thumb’s Blues—“got” “Housing Project Hill” (“You must pick one or the other / Though neither of them are to be what they claim”—Dylan’s wild form sneering at the categorickal op) off of Jack Kerouac. Cul de sac. Edward Dahlberg (The Flea of Sodom):

Nations without stable forms and deities are brutish. A populace, mad for novel raiment and bizarre amusements, breaks antique idols and proverbs and canonizes trash. ‘Whom Jupiter desires to destroy he first drives mad.’ People that are not Janus-faced remember little, because they are always changing their customs and calling it Progress which is a sly word for Mammon.

Smells like l’esprit avant-gardiste, its Nirvana replete with “claims adjusters,” completely “beholden unto themselves.” Cul and “pot”—there’s a possibility. Dahlberg:

Ezekiel makes expiation for Judah and Israel by taking into his mouth the parable bread of cow-ordure. Dropsical Heraclitus covered himself with stable-dung.
Paracelsus asserted that all the disorders of the mind emanate from the bowels. Vespasian’s niggardliness was apparent in his face that always looked as though he were straining for defecation.
Epimenedes kept his food in a bullock’s hoof and ate meagerly as possible so that he would have no evacuations. . . .

Ah, and Heraclitus: “The sun’d better avoid overdoing its measures. If so, the retributress Erinyes, emerged up out of the bloody genitalia of Uranus, sever’d by Cronus, find it out.” (Straining myself now, culpable of “prissy verbalisms”—see Dahlberg to Olson: “You damage your lines repeatedly because you want to be the vernacular clown or to be the jolly outhouse versifier, it gives you, you think, the common Touch.”) If Shakespeare says: “th’ unthought-on accident is guiltie / To what we wildely do,” isn’t that reason enough to pursue it? And “wildely”? Three stories to end (I am getting nowhere). Aldo Buzzi, architect, traveler, gastronome and raconteur of ingenious miniatures, out of Journey to the Land of the Flies & Other Travels (1996):

Lichtenberg wrote of a man who “was working on a system of natural history in which he had classified the animals according to the shape of their excrement.” He singled out three categories: cylindrical, spherical, and cake-shaped. “Where he jokes,” Goethe said of him, “there a problem lies hidden.”
Georg Christoph Lichtenberg was a German wrier of the eighteenth century. He was a hunchback. At thirty-five he fell in love with a girl of twelve, and he lived with her until she died, five years later. He was the inventor of an object that became famous, nearly as famous as Galileo’s pendulum or Newton’s apple or Möbius’s strip: the knife that has no blade and whose handle is missing.
When I was a high school student, my old philosophy professor often cited Lichtenberg’s knife and smiled. He smiled on his own account, because the students were too young to appreciate this wonderful invention: it seemed a joke that wasn’t funny, and they laughed at the professor’s smile. To understand something it is necessary to have lived a long time, perhaps to die . . . and to live again. A dead man coming out of the tomb would be the best master of life. Seated on his own name incised in the granite slab as shiny as a mirror, and turned toward the sun that has warmed the stone—now, finally, he understands the value of a ray of sun, and he could, I believe, make us understand it. 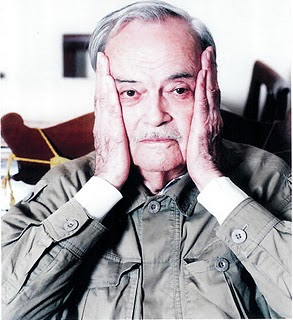