Out and back, a memory-soluble journey up through the maple-clad hills of Pennsylvania, interspray of early redbuds marking the high reach of spring. (In the bottoms it’s tarry’d and succumb’d: the magnolia peak’d and gone slovenly, throwing its rust-color’d whites down in wry post-coital petulance.) I addled my pate, I walk’d the grape hyacinth-blast’d streets, I study’d the mating trills of toads. A big-head belt’d kingfisher ratchet’d its way, tree-limb to tree-limb, along a sputtering creek. I read a little, wrote nothing (Melville to Hawthorne: “I have written a wicked book, and feel as spotless as the lamb.”) Mostly, off moments: the Edward Dahlberg / Charles Olson correspondence (the 1990 Paul Christensen edit’d In Love, In Sorrow), trying, bluntly, to figure out who’s zooming whom, and concluding Olson probably spends himself mostly trotting back Dahlberg’s mots, and wrongly. Dahlberg in 1950 is begging Olson:

. . . you nimble-fingered Autolycus, that when you pilfer from me, that you do so with more exactness. Heraclitus did not say what you aver he said. It was Empedokles who said it, and he wrote it quite differently. Let me sharpen that Mind of yours. “The blood around the heart is the thought of men.” Your own garbling of this remarkable line is not bad, not at all; it is quite good. Now if you can mutilate another writer’s text with as much skill, you are likely to turn out to be a very talented man, almost as great and blunt as Anak himself. But I confess, you steal as only a Genius can, and who should know better than I?

Dahlberg’s got, admittedly, some plugs he repeatedly jams in leak-holes, too—the thief Autolycus is one. Regarding thievery, editor Christensen points to a muddle: of Dahlberg’s Can These Bones Live (1941), he writes: “it bears the marks of his collaboration with Olson on the ur-Call Me Ishmael, the version that Dahlberg denounced as too imitative and derivative of his own writing.” Adds: “the complexities of a literary relationship are bound up in the circumstances of these two books: the one aborted, put aside for five years, rewritten in blind haste over a few months in 1945, and published in 1947, the other formed partly out of the experience of Olson’s struggle and early failure to complete a study on the same subject, but which Olson apparently had gone over with his own editorial pencil, as he later remarks in a letter to Dahlberg.”

The other stirrings in the tangled grasses: hints of Olson’s “Projective Verse.” (The Empedocles line itself is apt here, too: blood-thinking, that whole body-emphasis the “lineage-boys” of Language writing continually abjure.) Here’s Dahlberg in 1940, claiming Shakespeare’s “Lines are . . . unfettered by phrasings, prepositions . . . articles,” pointing to a spleen of “Pure Epithet: Reechy, drenched, murky, without a clinging Substantive.” He warns Olson:

You overburden your perception with obstructive words that add nothing to seeing, hearing, breathing. The Verb, as Huysmans said, is the central force of the sentence; and the power of the sentence lies in its Crisis. One begins a line to finish it with a Cry, a Moan, to get to the End. The thing, above all, is to Finish.

Writing, it, too, with its the post-coital “finish” and mess. Too, in 1948, Dahlberg writes: “the path to perception is perception . . . all else is waste, Dead Sea prose.” (Cf. Olson’s “one statement (first pounded into my head by Edward Dahlberg): ONE PERCEPTION MUST IMMEDIATELY AND DIRECTLY LEAD TO A FURTHER PERCEPTION” and “always one perception must must must MOVE, INSTANTER, ON ANOTHER.”) Or see Olson’s (nigh-simultaneous with “Projective Verse” ’s printing in Poetry New York) rather muddled 1950 note to Dahlberg regarding “the ‘heroic’ vs the ‘ethic’”: “One of the first reasons why your narratives are of first importance is, that you have broken the lyric ‘I’ and the egotist ‘I’ and the rational ‘I’ completely. You have, therefore, made it possible for your own ‘I’ to take on the force of the ‘Hero’. Thus ethic is disposed of—which has fed on the mediocrity of life as it is. You allow in (fr the Ixion wheel image, on) a multiple man . . .” That particular fatuousness—that “multiple man” might “dispose of” ethics (still “with us”—see the monstrous mechanical borrowings of the Flarf gringos, “ethical” because the ego’s undeploy’d?—being sort’d “elsewhere” in a slovenly “sortes Googleanae”?)—succumbs in Olson’s essay to an equally muddled formulation of “objectism”:

. . .a word to be taken to stand or the kind of relation of man to experience which a poet might state as the necessity of a line or a work to be as wood is, to be as clean as wood is as it issues from the hand of nature, to be shaped as wood can be when a man has had his hand to it.

Unh-huh. Handy, indomitably so. Next sentence: “Objectism is the getting rid of the lyrical interference of the individual as ego, of the ‘subject’ and his soul, that peculiar presumption by which western man has interposed himself between what he is as creature of nature (with certain instructions to carry out) and those other creations of nature which we may, with no derogation, call objects. For a man is himself an object . . .” Etc. That’s exactly the kind of abstruse uselessness Dahlberg wars against with lyric relish:

i, too, am one of the stupid, drowsy oxen, having fed on asphodels for some years in God’s Meadowland, and now having nothing in me but mountain and bare tree stupidity; i am a sere trunk, not as tall as Anak, but more stolid and statuesquely clownish. i also have that blood-unwillingness to explain what you could misinterpret more profoundly. i am only laughing a little, but not really, remember that sokrates went to the poets to ask them to interpret their images and they did not know how. there is something in our river and glebe and sheep inceptions that forbids us to explain what we wrote, we [do] not know how. and, honestly, i would feel a little showy, gaudy, doing some balaam braying, feigning moloch soothsaying in the secret groves, were it in dead earnest (and the earnest in this manner are surely dead) to give you a scholia, a piece of fatuous exegetics; it would not be blood-sport as it is in making a book or a trull or a fine my lady the doxy, and you would be bored, and most uninstructed, and i should be by caitiff premeditation a fat oiled fool.

A sterling recovery in the age of fatuous exegetics and fat oil’d fools. Look, too, at Olson’s crabbedly syntactical bumf and gull regarding the “LAW OF THE LINE” (that use of “LAW” is telling): “Do not tenses, must they not also be kicked around anew, in order that time, that other governing absolute, may be kept, as must the space-tensions of a poem, immediate, contemporary to the acting-on-you of the poem?” Isn’t that vacuity itself merely burden’d with some combo of dig-vernacular (“kicked around”) and laughable pseud-speak (“the acting-on-you”) pretence straight out of a dog-ear’d lexicon of earnest-German sophisms? I’d rather read Dahlberg’s jaunt (March 17, 1949) regarding “the knotty and baffling perplexity of prose or verse”:

Should the line be an Afric leopard, a water-hog of the Nile, or just a mild Pythagorean bee. Should we write humbly or fiercely or plainly? I know I have been too obscure; what right has man to be as darksome as a god in his lore? Ay, who will tell me anything? Meanwhile, my ruminative cud are bitumen and asphalt. And I walk alone thinking as best I can, but these miserable peripatetic exercises are in only a small way purgative, because there are neither gods in Hades nor mortals here for company.

Oddly, it’s Frank O’Hara one recalls in Dahlberg’s lines (“darksome as a god”—did O’Hara, who seemingly read everything, read Dahlberg?)—think of the O’Hara of “Ode to Joy” (“make me distant and imaginative / make my lines thin as ice, then swell like pythons”). And that combo of insolence and doubt—isn’t Dahlberg’s line about the writerly “trajectory” (“the little American cycle: first the writer is a young, acerb Timon, but as soon as he gets into comfortable, pragmatical relations with his environment, he is a pickthank friend of the national culture he once abhorred”)—isn’t that akin to O’Hara’s “A Young Poet”—“full of passion and giggles / . . . exhausted by / the insight which comes as a kiss / and follows as a curse”?

Nobody knows how to make a book; even after it has been written, and one or two or three human beings say yea to it, can the owner of the vision be sure he is not a lazar, a pickpocket, a lewd churl. How often can one read the most amazing line one has made without draining gall and hyssop? How long was Shakespeare able to stomach HAMLET? It was a spewing forth to begin with.

And: “We are always writing another book because the preceding one is a failure.” And:

the book, you say, should be a comfort . . . tell me, what is it to make a book, ay, fine and quick for the soul to make, and when it is made, a sin, and a folly and a disgrace, for how can you make a book out of virtue, which no one possesses but liars and soup and money hacks, so we’ve made a book, why then miserable toad, adder, and summer croaking frog, go and make another folly, sin and disgrace for another book. i have no solace in books, nor can i say with aughte else but tombstone laughter that a book finished is just a cold ague, to be printed and misread . . .

And: “I find nothing so hard as to write one good sentence. How much skill can one ever acquire. If you write very plainly you may be empty, or if you take the hazards that I do, foolish, bathetic, tumid. Longinus is far more satisfied with those writers who take great chances than with those who avoid all risks.” And: “I do not believe in Jesus as you know; I hardly think he was more than a hurt and wandering Word, as the Gnostics conceived him to be. . .” 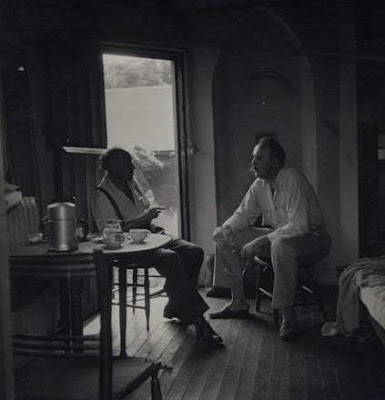